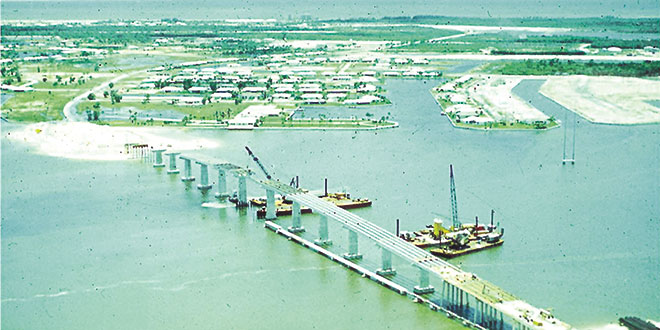 The Judge S.S. Jolley Bridge as it was being constructed in 1969. SUBMITTED photoS

Marv Needles is one of a relatively small group of people who can recall a Marco Island much different from the modern, bustling resort community of today.

Marco’s full-time population now stands at about 16,000, with the number of residents almost tripling during the winter tourist season. The population stood at about 750 when he arrived in 1969, said Needles, the owner/broker of the business he started here, ERA Flagship Real Estate.

“Most of them were construction workers, a huge number of construction workers,” said Needles. “It was definitely a blue-collar environment. There were a few of us that worked in the administration office and there were a few retirees. Collier County didn’t have enough workers to do the work here, putting in seawalls, the roads and all that, so they had to bring people in from Dade County.”

Not long after moving here from Ohio, Needles began working for Marco’s original developer, the Deltona Corp. and its owners, the Mackle Brothers. He first worked as “a gopher – go for this and go for that” – for one year. Needles earned his real estate license during that time and then began working for Deltona in that capacity. 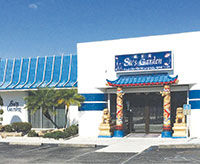 public for the first time.

Marco was largely undeveloped, so the Deltona Corp. erected a trailer park for the workers in the area where Cape Marco now stands, at the island’s south end, he said.

Needles said only a small portion of the island’s canal system had been created when he landed on Marco. “But other than that, there really wasn’t much that was completed yet, so I was here to watch much of the construction,” he added

When asked what the community was like in 1969, he said, “It was alligators and mosquitoes, with the mosquitoes dominating. Going out to get the newspaper in the swale, it was a chore getting through all the mosquitoes and getting back in without getting welts all over your body.”

He also recalls that the only access to Marco from the mainland was a manually operated swing bridge located on Goodland, which was replaced a few years after completion of the original span of the Judge S.S. Jolley Bridge. Construction of the Jolley Bridge began in 1969.

Grocery shopping initially meant heading into East Naples, almost to downtown Naples, but within three months of Needles’ arrival, a Winn-Dixie grocery store opened in what is now the site of the Publix supermarket 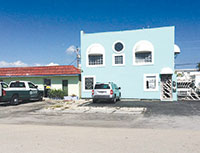 Site of the Coconut Bar, a favorite haunt of construction workers for the Deltona Corp.

in the Marco Town Center. Before it opened and rather than make the long, circuitous ride to East Naples, people often opted to stock up on groceries at a 7-Eleven, which was then located in the space now occupied by Kretch’s Restaurant, off Bald Eagle Drive.

“Supposedly, it was the No. 1 grossing 7-Eleven in the state of Florida,” said Needles. “I can’t verify that, but that’s what was being said at that time. That could be true because we had no grocery store.”

As with so many other people, it was chance that brought Needles and his first wife to Marco. They had decided to make Florida their home and they were traveling the state, looking for a community where they felt they could settle down.

“We tripped upon Marco and the rest is history,” said Needles. “This looked like a great place to start a family and be part of the overall growth of the community. My kids were born and raised here. They went away. They came back. They work in the office. My grandkids are here. So, life is good.”

Needles recently gave a Powerpoint presentation at the Marco Island Historical Museum entitled “Building of the Community: Marco Island,” in which he discussed Deltona Corp’s early development of the island, his experiences on job sites and in real estate, and what life was like here 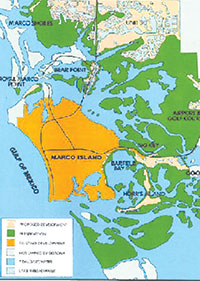 His first home was a unit in the Seabreeze South condominiums, located off N. Collier Boulevard.

“We used to walk right from there, straight through to the beach because there were no buildings there,” said Needles. “I had a good friend who had a Jeep and we’d go across there and all the way to the Marco Pass, which used to be wide open. We used to fish for Snook right there from the beach.”

The only buildings on or near the beach, he said, were the Sunset House and the Emerald Beach, and the Marco Beach Hotel and Villas, which was then a two story structure and also the point at which Collier Boulevard ended.

“I used to refer to it as Howard Johnson’s without the orange roof,” Needles said of the Marco Beach Hotel and Villas, which is now the Marco Island Marriott Beach Resort, Golf Club & Spa.

He said that instead of homes, Landmark Street was the island’s first airstrip.

Needles also recalled that Marco’s night life, in those days, included the long-closed Coconut Bar, which was the favorite watering hole of the construction workers.

“If you had a date, you didn’t go in there because somebody was liable to hit you with a pool stick,” he said.

Needles worked as a realtor for Deltona Corp. for about one year, before moving on.

out of product,” he said. “The (U.S. Army) Corps of Engineers had denied their (environmental) permit and that pretty much killed the further development of Marco. About a third of it didn’t get developed – everything to the east, toward Goodland.”

So he went to work for a small real estate company on the island and apprenticed for two years in order to become a broker. He then opened his real estate office 1973.

Needles’ professional life has also included a foray into the construction industry. His company, Flagship Homes, built about 175 homes on Marco, in Goodland, Lely and Port of the Isles before ceasing operations just before the recession hit.

“I’m getting back to what I used to do, which is representing buyers and sellers in real estate because it’s what I absolutely love to do,” he said recently. “And I would absolutely be bored to death if I retired.”

Needles has also been heavily involved in the island’s civic organizations and government. He helped to start the Marco Island Chamber of Commerce and served as its first president. He’s also a past president of the island’s Sunrise and Noontime Rotary Clubs, helped start the Greater Marco Family YMCA and served on the city’s Planning Board for 15 years.

He said he’s excited by the Marco of today. “I think that Marco has become a much more diversified community than I expected back then,” he said.