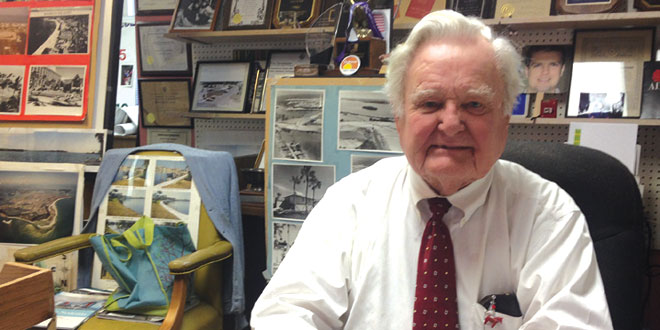 Herb Savage sits in his office where he keeps memorabilia, amazing photographs and architectural plans. PHOTO BY NATALIE STROM

Many Marco Island residents know Herb Savage. The man has lived here since 1979, but his legacy on Marco Island supersedes that date. As the official architect to the Mackle Brothers, Savage helped create the vision that is now Marco Island. Approaching his 95th birthday on January 6, Coastal Breeze News asked Savage to sit down and share some of his memories of building an island, thoughts on how Marco has grown over the years and how it feels to be surprised by a birthday party thrown in his honor at the Rose History Auditorium at the Marco Island Historical Society.

CBN: When did you first arrive on Marco Island and why?

HS: “Well, I was actually about 12 when I went to Marco for fishing for the first time. You see, I grew up in Miami. There was a saying that people with little courage never go over 100 miles away. Marco Island was 104 miles away! We came for the great fishing and all I caught was a catfish! There was no pavement on the (Tamiami Trail) yet; it would have been 1931 I guess. I’ve seen less and less birds on that road as the years go by. I worry about that.”

“I worked 19 years with the Mackle (Brothers). They built 16 to 18 communities, including Port Charlotte. The Collier sons came to Miami in the early 60’s and asked if the Mackle’s wanted to (develop) Marco. Jimmy Vensel was the number one architect and I was number two. Vensel did the land planning. I did the buildings. We developed a group of 22 model homes, 12 waterfront, 10

Savage and two of the three Mackle Brothers discuss Marco design in the early 60s.

inland. We opened the island to the public on January 31, 1965. I designed a 50-room hotel which is the Marriott now. Shortly after, Frank Mackle III told me, I want a high-rise. I began designing a hotel and villas. It opened in 1971 and was called the Marco Beach Hotel and Villas.

CBN: How did you, Vensel and the Mackle Brothers decide how to design the island?

HS: “When we first talked design, I recommended a Polynesian theme; Hawaiian. The Mackles suggested I go to Hawaii, so Emily, my wife, and I went to research. Emily was very upset because she was not able to sit on the beach once!”

“The theme became smaller houses. Frank (Mackle) said, ‘I want young people, the working class and retirees.’ He said, ‘Herbert, when someone comes in their front door, I don’t want them to see a kitchen. I want them to look through the house and see the lanai, their backyard, the waterways.’”

“Where Kretch’s is now is where the first commercial building was. There was a 7-Eleven and a post office. On the corner there was a service station. (The Mackle Brothers) were interested in maintaining a scale for anyone to have a home. The Collier family was upset we wouldn’t build bigger houses.”

CBN: Tell us more about the building of the Marco Beach Hotel and Villas eventually becoming the Marriott.

HS: “As (the island) was being developed, we had 28 (environmental) groups upset with us for building 100 miles worth of waterways. They didn’t want that. Congress passed a law prohibiting us from (building more than 100 miles of canals)   and that’s why they had to sell

Marco’s beautiful beach circa the mid-1960s.

the hotel. The Marriott bought it, and they wanted to build a second tower. We gave them the architectural designs.”

“The original tower featured a mosaic that went all the way to the top of the building. I had a friend on the east coast who put it together. They laid out the mosaic panels on the street and placed them all the way to the top. (The Marriott) couldn’t get anyone to duplicate the mosaic (for the second tower), and I heard they were going to rip it off the building so I found an architect, and he duplicated it. Several years later, a few panels fell off (the new one) and they took them both down. Unfortunately, that’s when the Polynesian theme began to disappear.”

CBN: Over the years you have seen the island expand and grow dramatically. What are your thoughts regarding Marco’s growth?

HS: “It’s amazing how it has all grown up, that’s something you have to expect. We always had a vision for the island of ‘mom and pop’ stores. We didn’t want to see a lot of large companies come in and take over, take away the camaraderie and community feeling. I’m not saying the changes are a bad thing because this island is still filled with those shops and is better than any place in the country when it comes to camaraderie. People are very friendly here, and even the publications are about the community. People here are involved with many charitable causes. Community and charity are still very strong here.”

CBN: What are your thoughts on turning 95? It certainly is a milestone.

HS: “People always ask me, ‘are 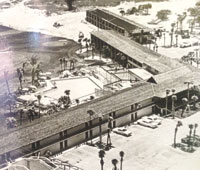 you retired?’ I say, ‘no, I’m just tired!’ The reason I’m still here today is because I come into my office every day. I still wear a tie every day, something I carried on because of the professionalism I saw in the Mackle Brothers. Emily also goes to her shell shop (across the hall) and works every day, too.”

“My only sad feeling is that as you get older, you can’t go out as much anymore. I’m in bed at 8:30 at night now, but my mind is still sharp as a tack. It wants to do things that my body won’t let it do anymore.”

“I still do what I can. I’m still active in the VFW because it represents a great tradition for our country. I carry my VFW and ROA (Reserve Officer Association) blank flyers on me all the time in case people are interested (in joining).”

CBN: You were surprised that a birthday party was being thrown in your honor. How does it make you feel that so many want to celebrate with you?

HS: “I thought to myself, ‘why are they doing that?’ I’m quiet and humble – that Emily probably wouldn’t agree with, though. People have made statements (about me) like ‘icon,’ and I haven’t done nearly as much (as others). It was a great experience (developing Marco Island) but I wasn’t responsible, I was just a part of it. I feel very blessed to live on this island and I thank God every day for the opportunities I’ve had. I just don’t think anyone is going to want to spend $35 just to celebrate my birthday!” 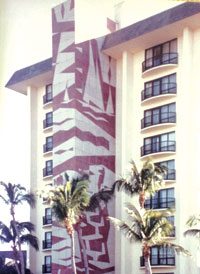 Many recall the beautiful mosaic, created in the Polynesian theme, that graced the tower of the Marriott for many years. PHOTOS COURTESY OF HERB SAVAGE

that, Herb. Finally, one last question for you. Do you remember the first time you sang “God Bless America?”

HS: (Savage lets out a long, hearty laugh.) “I don’t remember the first time, honestly. I don’t remember what year it was, but I know Emily was initially embarrassed. I do remember celebrating my birthday (a few years ago) at the Marco Ocean Beach Resort, and I got up and sang ‘God Bless America.’ Two young men from California came up and said they never saw that before, and they said thank you. Ever since then, I don’t hesitate to sing.”

“I was given the Lifetime Achievement Award a few weeks ago, and I asked if I could sing. They said to wait and they would let me know when. Suddenly they started singing it. Emily said, ‘they’re asking you to come up, Herb.’ So I did. I’m grateful for the award. I don’t know why I got it, to be honest, but I sure appreciate it.”

CBN: We all know why you were given the award. You have set an example over the years through your patriotism and leadership within the community. You have been a part of what has kept the camaraderie alive when it comes to Marco Island. Thank you for sharing your history, thoughts and time with Coastal Breeze News. Happy Birthday Herb!

Herbert Rosser Savage Senior’s birthday celebration will be held on January 6, 2014 at the Rose History Auditorium at the Marco Island Historical Society, 180 S. Heathwood Drive. Tickets are $35 and include heavy hors d’oeuvres, a cash bar and an incredible celebration. For information or tickets, call Debra Shanahan at 239-248-7419 or Lori Wagor at 239-784-6541.