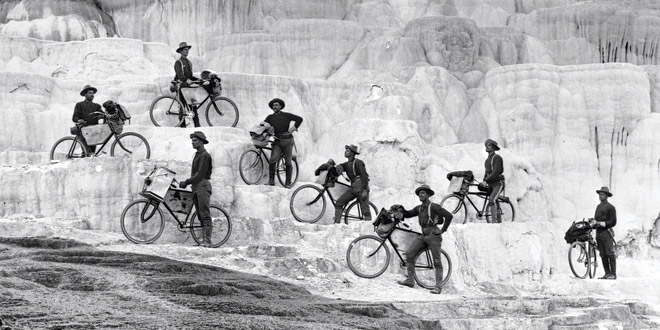 The sun is beaming down on you, you smell the ocean breeze as it whirls around your body, you feel the sand around your toes, and you are now lost in your own little paradise. You pick up your cold beverage, take a long refreshing sip and then your feet start tapping in the sand as you hear the mellow lead-in to Bob Marley’s tune “Buffalo Soldier” as it starts playing on your radio or iPod You sing along; “Buffalo Soldier, dreadlock rasta, it was a buffalo soldier………” And you drift off.

We all know a lot of songs and for the most part we can sing along to a lot of those songs, but how often do you ever really “listen” to the words? Have you ever really thought about their meaning? Maybe for some songs, the writer’s meaning is different than yours, but other songs’ meanings are pretty definitive when it comes to what the writer is trying to convey. I think for Bob Marley, his song Buffalo Soldier is one like that. Well, unless you never knew what a Buffalo Soldier was.

African American soldiers have fought gallantly, and with much distinction and honor since the colonial days. They have fought in wars such as the Spanish American war, the Mexican Expedition, and of course, World Wars I and II, and many others. In reading about these brave soldiers in their early days of fighting for our country it seemed to me that some of their most notable contributions and sacrifices came during the time of the Civil War. During that time, more than 180,000 African Americans wore the Union Army blue; about 30,000 served in the Navy and more than 200,000 served as laborers, engineers, in hospital staff and many other military supported projects. More than 30,000 of these honorable soldiers gave their lives for the sake of freedom and country.

Shorty after the Civil War ended, in 1866, the U.S. Congress decided to authorize the formation of the 9th and 10th Cavalry and the 38th, 39th, 40th, and 41st Infantry Regiments. These became all African American peacetime units. It was out of Fort Leavenworth, Kansas that the U.S. 10th Cavalry regiment was formed and where the original Buffalo Soldiers were said to have started.

The term Buffalo Soldier has had a lot of disagreement as to where it actually stems from. According to the National Buffalo Soldier museum, the term came from the countless times that the African Americans soldiers fought against the Native Americans. The Native Americans have been thought to have told stories of these African American fighters and how strong and determined they were, and how even after being shot at and beaten and even backed into corners, they always continued to fight, much like the mighty buffalo they often hunted.

What I found to be the most interesting thing about the Buffalo Soldiers besides their love and sacrifice for our country was that they were the first soldiers that the U.S. Army enacted to test bicycles for use in mountainous conditions. General Nelson A. Miles began advocating for bicycle couriers in the Army after seeing a six-day bicycle race in Madison Square Garden in New York in 1891. He wrote that unlike a horse, a bike did not need to be fed and watered and rested, and would be less likely to collapse. Furthermore, a bike is smaller and quieter than a horse and thus could help a soldier

The Buffalo Soldiers were the first to utilize bicycles in the U.S. Army.

sneak up on the enemy, he argued. It was Gen. Miles who became known as “the patron of military cycling” and also approved Lt. James A. Moss’ request from Missoula to form the bicycle corps. So in 1896, the 25th infantry U.S. Army Bicycle Corps was formed in Fort Missoula, Montana.

Their first bicycle trip was to Lake McDonald and back. It was a 126 mile trip in which they used single speed Spaulding bicycles on loan from the manufacturer in Massachusetts. Each bike loaded with gear weighed about 76 pounds; they hauled everything from a can of beans to a jar of lard. The roads were often muddy and filled with deep roots and stones and the soldiers had to often re-cement the tires back onto their wooden bicycle rims. The Lieutenant found the first trip to be a success so he planned the next. The next trip was about 800 miles and took 16 days. While visiting Yellowstone National Park, the soldiers dealt with heavy rains, major headwinds, punctured tires and numerous sicknesses, but they completed the trip and were said to be in good spirits.

The following summer, 1897, the Bicycle Corp. and Lt. Moss planned the longest trip yet; one that was chronicled by many newspapers of the day. Their trip was from Missoula to Saint Louis; a total of about 1,900 miles and 34 days. The 20 soldiers averaged 6.5 miles per hour. The bicycles from Spaulding were upgraded, made of lighter weight and steel rims instead of wood. Often times, the soldiers had to carry their bicycles, especially through the blinding snow and deep descents of the Rockies. The bicycles suffered damage to the tune of 17 tires and a half-dozen broken frames, which seems reasonable given the demanding ground the riders covered. But the corps quickly handled most of its own repairs.

As quoted in the Army & Navy Journal at the time, Lt. Moss stated about the trip and the soldiers of his corp., of which he was extremely fond of and had the upmost respect:
“The trip has proved beyond peradventure my contention that the bicycle has a place in modern warfare. In every kind of weather, over all sorts of roads, we averaged fifty miles a day. At the end of the journey we are all in good physical condition. Seventeen tires and half a dozen frames is the sum of our damage. The practical result of the trip shows that an Army Bicycle Corps can travel twice as fast as cavalry or infantry under any conditions, and at one third the cost and effort.”

In 1898, Lt. Moss was in the planning stages of another bicycle mission; this time, from Fort Missoula to San Francisco. It was then he got word that the Army would suspend further tests due to the brewing conflict with Spain. Indeed, the Spanish-American War broke out that April, and the Army sent the 25th Infantry to serve in Cuba, but not on bicycles. So there ended the Buffalo Soldier Bicycle Corp., but not the Buffalo Soldiers, Their history continued to greatly support the United States war efforts. There were at least 18 Medals of Honor presented to the Buffalo Soldiers during those western campaigns in which they fought.

Bob Marley’s song pretty much seems to cover the Buffalo Soldiers fight for survival……”Said he was fighting on arrival, fighting for survival; Said he was a buffalo soldier in the war for America”………. And you doze off again……