Bring in the New Year with Eaglets 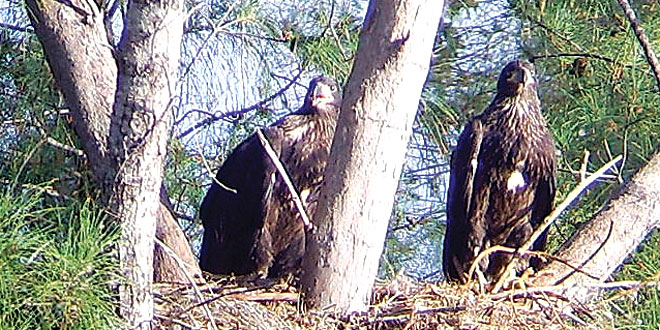 The holidays are upon us, and New Year’s Eve is approaching quickly. There are many traditions to celebrate the New Year; for a few, this includes fireworks. Fireworks may be a festive, but they are illegal on Marco Island. Moreover, the light, noise and explosions are bad tidings for Marco’s local wildlife.

In fact, in Florida, the only legal fireworks for use by consumers — who don’t possess a special permit — are “sparklers”, which include sparklers, fountains, snakes and glow worms. Illegal fireworks include Roman candles, bottle rockets and any other fireworks that act as projectiles.

While consumers may see fireworks in the store or in tents set up along the roadway, it is a known fact that the stores and the holiday tent sale locations selling fireworks other than “sparklers” are exploiting a loophole that does allow them to sell fireworks for “other uses”. If you use the illegal fireworks in your backyard, in your driveway or on the beach, you are breaking the law. In Florida, possession or use of illegal fireworks is classified as a misdemeanor. You can be arrested, and if found guilty, be fined up to $1,000 and sentenced to one year in prison.

So why such stringent rules? Statistics show that the illegal use of fireworks commonly causes bodily injuries and fires to structures. Environmentally, they cause brush fires and disruptions to wildlife, such as nesting birds. Marco Island had its own example of this last New Year’s Eve when an illegally mortar-launched fireworks forced out the nesting Bald Eagles in the Marco Eagle Sanctuary on Tigertail Court. Consequently, the eggs in the nest died. This was determined by an Audubon biologist and a case is pending with Florida Fish and Wildlife Conservation Commission. The Bald Eagles stayed on site, but no chicks were produced last season.

Thankfully, this season, the Bald Eagles are nesting again. The female has been on eggs for several weeks with eaglets due to hatch in late January or early February 2014. Please forego fireworks so the eaglets hatch.

Another type of celebration that has quickly come into fashion is the release of “sky lanterns”. Over the past year, the observation and evidence of “sky lanterns” have been seen and found on the Marco Island beaches. Sky lanterns are virtually a small hot air balloon typically made of paper or other material with an opening in the bottom to suspend a flame so it will float upwards. Recently, movies and television commercials have made them very popular for special events and ceremonies.

Due to the high potential of trash, wildlife impacts and fire hazards they create, many countries and states have banned them altogether. Please be aware that sky lanterns are prohibited, as well as, balloons or similar products that are released off the beach and over the Gulf of Mexico. Under the city code, a citation for $100 may be issued for the first offense and up to $500 for subsequent offenses.

Let’s keep trash out of the Gulf and off Marco’s beaches. Please keep the local wildlife safe, the beaches beautiful and the Gulf of Mexico healthy.

For more information on Florida’s firework regulations, please call the City of Marco Island Police Department at 239-389-5050, or go to:

For more information on beach issues, please contact Nancy Richie, Environmental Specialist, City of Marco Island at 239-389-5003 or nrichie@cityofmarcoisland.com or the Marco Island Police Department at 239-389-5050.