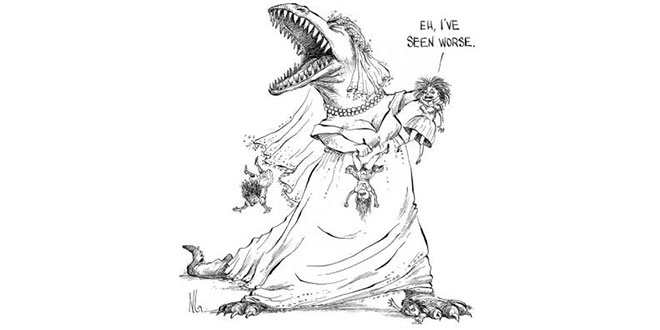 They say it’s all about the dress, and many a bridezilla have been revealed on more than one reality show. I have had the pleasure of experiencing more than I can count, firsthand in my jewelry stores over the decades, before it was even in fashion.

For those of you who have no idea what a ‘bridezilla’ is- this is the best description I found on the internet: One incredibly ridiculously spoiled young female brat who thinks she is the center of the universe just because “Her Wedding” is eighteen months from now. She feels everyone in the world has to drop everything and come running, in this twisted prime-donna’s mind. All living creatures involved in the wedding will experience emotional scars from her terrible and impending wrath. (A spin on ‘Godzilla’ – an ancient Japanese cult monster).

Any readers who have experienced a bridezilla up close and personal can relate to this article. If you happen to be one, or worse, one in training, I suggest you turn the page, for my article may set you off, making you cause destruction and mayhem to local buildings or power-plants.

Laugh if you will, I can spot one after less than 30 seconds into a conversation. Her devouring stare and body language says it all. I immediately warn the staff of impending doom and its ugly aftermath.

It all starts at the very beginning…the engagement ring.

In a nut shell, the first big mistake is the groom who brings the future bridezilla and her mother to “help” pick out a ring. The problem was that this groom had called me ahead of time to convey his price range of no more than $3,000 for the diamond and ring. But the future bride’s mother (a former, semi-retired bridezilla.) had other ideas, and insisted that her spoiled brat or bridezilla-in-training should have at least a two-and-a-half carat ring, which would easily set him back at least eighteen thousand bucks, a little over his budget. The lack of color on his face says it all.

Within moments it goes from bad to worse, the groom-to-be now looks like he’s been turned inside out, and the future wedding party (or future train wreck) heads for the door. It was obvious to me that the mother and daughter were totally disgusted due to my lack of $3,000 two-and-one-half carat diamonds. I thought that was the end of it. So I thought!

A couple of months later they are back for wedding bands, and I noticed a nice one carat diamond on her ring finger. They told me it was an heirloom from his deceased grandmother’s estate. He avoided the eighteen thousand dollar two-and-a-half carat diamond bullet! Alas, the young she-wolf seemed appeased…for now.

Well, as expected, there will be nothing but the best for her majesty. To his surprise, she produces a photo of the exact diamond studded wedding ring she wants, and no other ring will soothe the savage beast.

Problem is the ring is an exclusive design that can only be purchased at a Cartier jewelry store, and it costs a little over $15,000! Sorry, I can’t help you with that dude, Cartier does not sell wholesale to other jewelers. She wants that ring, not a reasonable facsimile thereof. Good luck! It was nice seeing you again.

Luckily, I escaped this one physically and monetarily intact.

I later heard it on the coconut telegraph that she micro-managed every aspect of the absurdly expensive wedding, and on top of it all, had a meltdown in the church, making everyone wait for over an hour before walking down the aisle. I firmly believe in what goes around, comes around, and it did. To add insult to injury, the perfectly prepared cute juvenile nephew lost one of the wedding bands that fell off the pillow somewhere in the church. My friend who attended the wedding said she should have post-dated the gift check; the marriage lasted less than a year. I can still hear this divorced bridezilla roar from under the Marco Bridge at every full moon!

Another bridezilla comes to mind that nearly caused me to be placed under protective custody (for her protection, not mine), after the pain and anguish I endured from her, not to mention my time, sanity and money.

The wedding band. All for one simple groom’s wedding ring. I sensed it was going to be a bad one from the start, and my instincts are always correct. Yeah, as I walk through the valley of death! Oh woe is me!

She brought four other persons to pick out one gold wedding band. It was immediately apparent to me that the groom-to-be had no say in the matter.

Months passed. Let’s just say the original design was changed and reconfigured by this bridezilla more times than Bruce Jenner’s license photo. So many times that I was so confused and dumbfounded that 24 hours before the wedding there was still no finished wedding ring! Make it wider! Make it thinner! Make it white gold! Make it yellow! Add diamonds! Now take them out! It’s too tight! It’s too loose! Mama Mia!

Then she called me the day before the wedding, “where’s my fiancé’s wedding ring?” I told her good question, as far as I know it’s still in that crazy mixed-up mind of hers!

“What do you mean you don’t have it?” I told her after the last (and what never seems to be final) product, I cut my losses and I melted the ring, diamonds and all, into a solid ball. And I suggest that she and her wimp-in-shining-armor had better head to the mall and buy a ring, because I’m not spending another penny or a second of my time on this adventure. And please convey my sympathies to the groom.

I slept with a loaded handgun in fear for weeks after that. I heard that particular marriage dissolved in three months. Luckily, that ex-bridezilla wails under some bridge in Ft. Meyers.

Please note that no names or descriptions have been mentioned to protect the innocent and guilty alike.

Richard Alan is a designer/ goldsmith/ bridezilla slayer and owner of the Harbor Goldsmith on Marco Island and welcomes your questions about all that glitters. 239-394-9275. harborgoldsmith@comcast.net. Check out our new web site www.harborgoldsmith.com.