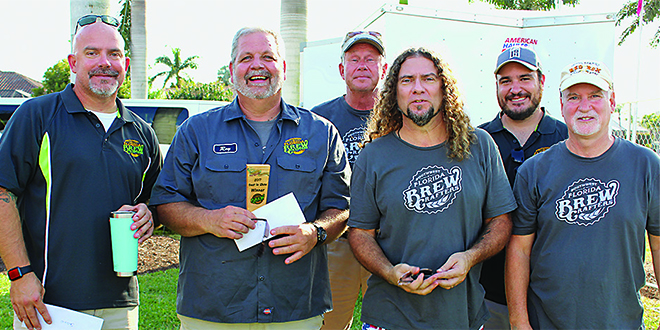 For the first time ever the annual Marco Island Seafood Festival held an official home brewed beer-tasting competition. Members of the local organization Southwest Florida Brew Crafters brought with them ten of their finest ales for festivalgoers to sample. After trying the various beers participants were able to vote for their favorite.

Cass Palmer, a local Florida Fish and Wildlife Service officer, founded Southwest Florida Brew Crafters two years ago. A home brewer himself, Cass decided to start the club with a few friends who were also interested in the beer making process. The club now has over 70 members and three local chapters: Estero (the mother chapter), Ave Maria, and Naples.

According to the Brew Crafter’s official website, the club’s main goal is to “promote awareness 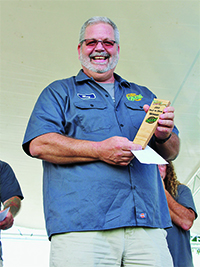 and appreciation of the quality and variety of homebrewed fermented beverages (beer, mead, cider, etc.) through education, research, and the collection and dissemination of information.”

Cass Palmer is the president of the club. He explained that a typical meeting might consist of a presentation by an educational speaker where members learn about malt or hop utilization. The club also puts on “Learn to Brew” days at the BrewStory, a home brewing supply story in Estero, where they hang out, eat, and make beer together.

“My favorite beer is an IPA,” said Cass Palmer. “I’m trying to venture out there and learn about other styles. But that’s the beauty of the club. We get to mix it up and learn from each

Cass brought with him a West Coast IPA that he described as light and “not over hopped” with a nice dry finish. His beer came in second place in the competition.

Allen Steen and wife Natalia brought a maple bacon beer they dubbed “Robocalypse” as well as a “Calle Ocho Pale Ale” made with homegrown sour oranges. They came in third place.

First place went to Roy Tomasch. Roy made a Juniper Rye Ale. As first place winner, Roy’s beer was the official beer of the 2017 Seafood Festival.

For more information on the Southwest Florida Brew Crafters check out: www.swflbc.org