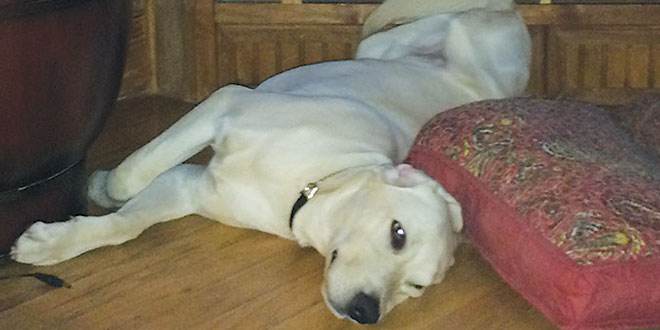 As they say – it is a dog’s life. I don’t know what ‘they’ meant by that, but Breezy gets a lot more sleep and rest time than I do. He’s settling into a ‘boring’ routine which includes going outside to do his business, eating, laying around the house, or if meetings aren’t scheduled and events don’t need covering, he comes to the office with me where he can find much more ‘action’.

As Breezy got older, we began to have faith he didn’t have to be put in the crate. It started slowly at first; a night with the crate door left open. He realized the freedom he was given, he’d come out and lay down by the side of the bed. He’d toss and turn, literally. Rolling on his back, pushing his paws into whatever he could, then roll the other way, stretch his legs out again. Eventually, after keeping me awake half the night pawing at various fixtures in the bedroom, he’d make his way back to the crate. Then he’d paw at the floor of the crate. The nice thick pad in the crate would get bunched up in the corner, and in the morning 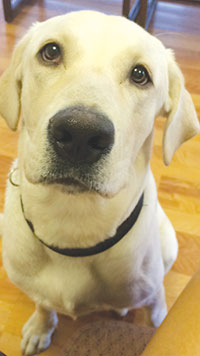 we’d find Breezy contorting his body around it, with the pad half over his head.

Although previously warned by the professional trainer that Breezy wasn’t crated enough, we threw caution to the wind. He was behaving so well we would sometimes allow him the freedom to roam the house if we were going to be gone a short time during the day. Part of this we deemed natural growth and part sheer laziness on our part. We were tired of the routine of preparing to leave the house, even with every imaginable treat possible in hand, dragging Breezy to the crate, get his head in and then quickly move to behind and PUSH him the rest of the way in. So, it got to be easier to make sure there wasn’t food within a three foot radius of any counter edge, put away all items that might otherwise entice him to chew and allow him freedom to roam.

We now know, without a shadow of a doubt, Breezy suffers from separation anxiety. We couldn’t be certain of course, not 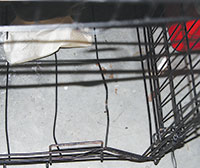 Bent crate, now in the garage, as a reminder of Breezy’s mystery escape.

until one epic event that removed ALL doubt. We wondered when Breezy picked up the habit of jumping in the pool every time he had a half-second lead in front of us on his way in or out of the backyard. That led to the wet dog syndrome. You know, where a dog romps through the house soaking wet? The ONLY thing more fun than slipping and sliding on wet tile chasing behind a wet dog is catching him and playing a hearty game of tug-of-war with the towel you’re using to dry him off. Ha! Once I thought I’d just leave him outside until he dried off. That is when we first got a hint of his separation anxiety disorder. He’d run from door-to-door frantically barking. He’d jump at the door and almost throw himself against the slider wanting in. Being sure the neighbors didn’t LOVE the incessant yapping and with him slamming himself up against the door wanting to come in, I quickly opted for the game of tug-of-war instead. (I didn’t need those beach towels anyway!)

The REAL proof Breezy suffered from separation anxiety came while I was on an overnight trip to Tampa. My husband went to

work in the morning, and my daughter put Breezy in his crate before she left for class. No problem, nothing unusual right?? WRONG! My daughter was home within two hours and no one will EVER know what happened during that time. The devastation and destruction was beyond imagination.

First the crate, you know the ones with metal bars and a heavy duty plastic pan type thing for a floor, was still locked, but Breezy was running freely around the house. A few of the bars were pulled up from the floor of the crate and slightly distorted, but certainly nothing he could get his head through let alone the rest of his body. The blinds on the French door had been ripped off from the bottom about four feet up with the slats laying all over the floor. Not only were they bitten up, but some of them were chewed completely in half! It wasn’t the end of the carnage for Breezy, oh no! One whole side of the bed skirt (which was custom made) was torn off. We now know without a doubt, Breezy suffers from separation anxiety and how Breezy got OUT of the crate with the door still latched will forever remain a mystery.