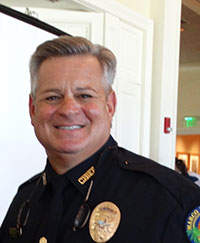 The Florida State Ethics Commission today ruled on a complaint from a former resident on the actions of Marco Island Police Chief Al Schettino in reference to how he handled an incident in early 2015. That incident concerned the noise complaints made by City Councilman Joseph Batte regarding a rental home at 300 Capistrano Drive. That residence was owned by Brien Spina, but has subsequently been sold. Spina’s wife, Tracy Calvert had filed the actual complaint.

The commission issued the following press release regarding their investigation;

“No probable cause was found to believe that Marco Island Chief of Police ALFRED SCHETTINO misused his position to direct officers to issue reports, citations, or Notices to Appear to a rental property tenant regarding a complaint filed by a City Councilmember who had alleged that the tenant had violated the City noise ordinance. State of Florida Commission on Ethics Press Release September 14, 2016. The Commission also found no probable cause to believe that he misused his position to alter or destroy police records related to the matter.”

“No one likes to have their integrity called into question, but I am thankful that the Commission has cleared me of any wrong doing,” said Schettino late Thursday afternoon.

A separate complaint was lodged against Councilman Batte in July of 2015 and the Commission has yet to rule on that issue.