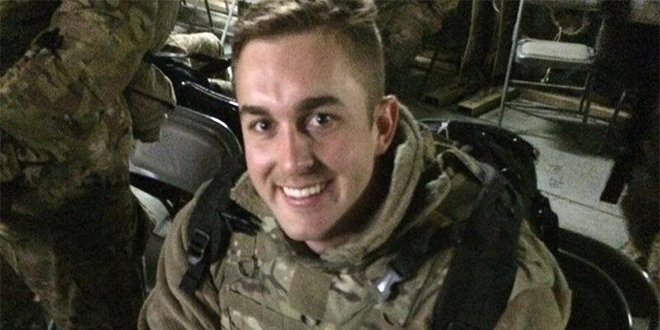 Submitted Photos | Staff Sergeant Cory Vosburgh is currently recovering from serious injuries sustained from a serious accident while on deployment in Greece.

For members of military families, thoughts of deployment always immediately run to praying for the safe return of their loved ones, no matter where their deployments might bring them.

For longtime residents Tony and Teresa Dorris those thoughts have raced through their minds on numerous occasions, as their son Staff Sergeant Cory Vosburgh, a six year veteran of the United States Air Force, has been deployed three times. His latest deployment took him to Greece to support aircraft stationed there. He had earlier in his career been deployed into Afghanistan on two separate occasions.

On March 31 the vehicle he was riding in was involved in a serious accident, injuring Cory and the three other riders. Cory’s injures were serious, and he has been placed in a medically induced coma to help deal with the swelling to his brain from a traumatic head injury. He also suffered numerous other injuries, and is being stabilized with his wife Ann by his side. She made her way to Greece upon being notified of his accident.

As of Thursday morning, Cory was cleared for the move to Ramstein Air Force Base in Southwest Germany, with two of the other injured airmen. His wife Ann will be traveling with them, while his mother Teresa is making her arrangements to meet them in Germany sometime over the weekend.

Because of the expenses involved with travel and loss of income from Ann’s job, neighbors and friends have established a Go Fund Me account to help defray some of those expenses. That account can be accessed at www.gofundme.com/corys-military-medical-fund for donations.

Another fund is being established at the Sun Trust Bank on Marco Island, and Coastal Breeze News will provide further details as they become available.

Teresa Dorris is the longtime manager of the Collier County Tax Collectors Office on Marco Island, while Tony Dorris served four years in the 1st Marine Brigade from 1975 to 1979 and is employed by Walkers Hideaway Marina.

Cory Vosburgh is a graduate of Marco Island schools and Lely High School. As more information becomes available, updates will be provided at coastalbreezenews.com.