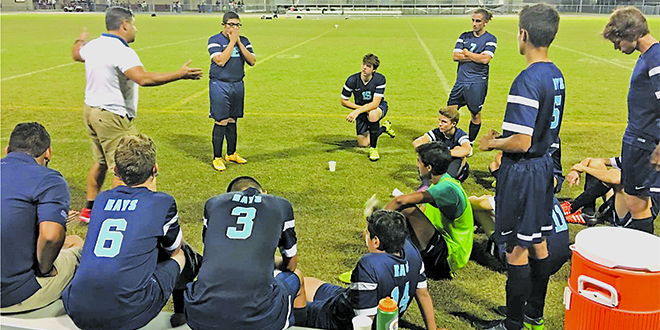 The first 11 games for new head coach Fernando Higuera and new assistant coach Brian Gambuzina have been challenging. With a 3-8 record, the boys’ season is reminiscent of the girls’ team when starting with new head coach, Jim Watt, three years ago.

“It is the same mistakes being made over and over that are hard to live with,” said Higuera who is finding his footing this year, his first at Marco Island Academy. He teaches Spanish and is optimistic once he gets used to the system. “I am encouraged by the good turnout at practices and games. The boys work hard,” said Higuera who spent a lot of time recruiting prospects from the student body before the season.

At their first home game on November 28, the Rays registered their first win of the season against St. John Neumann High School, 3-2. It was an intense game with two goals scored by Josh Dacruz and one by Juan David Patino.

The next night, November 29, still at home, the Rays went down to Seacrest Country Day School, 2-9. The game was characterized by sloppy play for the Rays. Josh Dacruz and Jack Babian each had a goal.

Still at home on December 2, the Rays lost to Evangelical Christian School, 1-4. The Rays scored first in this one on a goal by Juan David Patino, but failed to hold
the lead.

On December 5, at Winterberry Park, the Rays lost to Southwest Florida Christian Academy, 1-3. The Rays were in it to the end. “This is a game we should have won,” said Coach Higuera. Josh Dacruz scored the Rays’ only goal.

On December 6, an away game, the Rays were “mercied,” 0-8 by Community School of Naples. Goalkeeper Daniel Fireman was bombarded by a steady stream of shots on goal. “Community had the best team in the area,” said Higuera, “Daniel Fireman had an amazing game and stopped many goals that were going in.”

On December 9 at home, the Rays were “mercied,” 0-8 by Canterbury School of Fort Myers, thought by many to be the second best team in the district. “We made more mistakes than in any other game,” said Higuera. “Daniel Fireman had an amazing night despite the result.”

On a balmy December 16 evening under the Winterberry Park lights, the Rays put everything together for an impressive 4-1 win over Moore Haven, sweeping the home series. Flashes of excellence during the year had been overshadowed by costly mistakes, but not in this one. The Rays finally put it all together. Striker Josh Lacruz scored all four goals on nifty feeds from wingers Babian and Patino. The winger duo were streaking up and down the field sending balls into the box and also defending at the other end. Playing with only three at the back, Cameron Zook anchored the defense, Eric Mikula was moved forward where he was winning battles for the ball and passing for an assist. Finally, goalie Daniel Fireman turned in another sterling performance, blocking seven of eight shots on goal to preserve the win.

Coach Higuera liked his team’s attitude in this game and thought it was a noticeable improvement over the first Moore Haven game, also a Rays win at 3-1. “After (Moore Haven) scored the first goal of the game, the team put a lot of effort in coming back,” said Higuera. “(After this game), I can envision wins against some of the remaining teams on our schedule.”