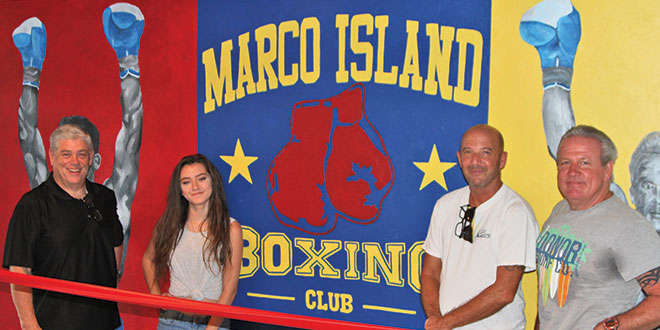 The creation of the mural is thanks to Marco Island Academy art teacher Robert Eder and his student, junior Stephanie Simon. Together, through a series of hour-long

sessions, they designed, painted and perfected the mural.

The mural features the late boxing legend Arturo Gatti who passed away in 2009. Rich Stoltenborg, a long time fan of Gatti’s, chose to memorialize the boxer whom he greatly admired. The other half is dedicated to Marco Island resident Jimmy Downey, a longtime friend of Stoltenborg’s. Downey played an integral role in the completion of the gym and helped with a lot of the heavy lifting.

For more information check out: www.marcoislandboxingclub.com or call 201-694-2182.