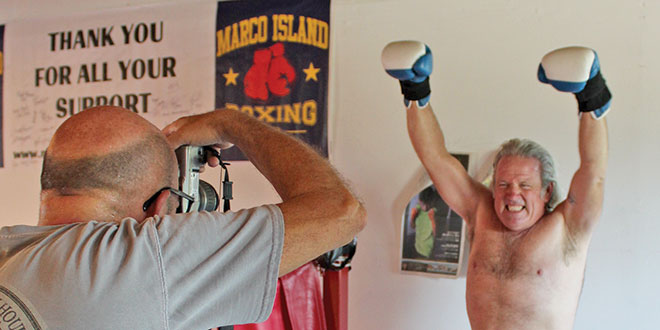 Robert Eder takes a photo of Jimmy Downey. Jimmy’s image will occupy the second half of the mural.

A few months ago Robert Eder, the art teacher at Marco Island Academy (MIA), received an email from Rich Stoltenborg, the coach and president of the Marco Island Boxing Club. Rich, having just recently purchased the space for a boxing club, asked if Robert would be interested in getting some students together to create a mural.

“I reached out to the high school because I know they have an arts program and I wound up speaking with Mr. Eder who was excited to do this for me,” said
Rich Stoltenborg.

The boxing gym, which opened in June, has undergone serious renovations. In what used to be an 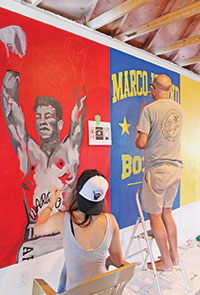 office building there is now a 10×10-boxing ring, punching bags suspended from the ceiling and a soon-to-be completed mural.

“I asked a few students, and Stephanie Simon was in my drawing class at school. She’s one of my best artists there,” said Robert Eder.

Stephanie Simon is an upcoming junior at MIA with a strong interest in the arts. When Eder told her of the project, she jumped on the opportunity.

“When it came down to it she’s the only person that really suited up and showed up,” said Robert Eder.

Together Robert and Stephanie have spent hours working on the almost complete mural. Stephanie has been in charge of the 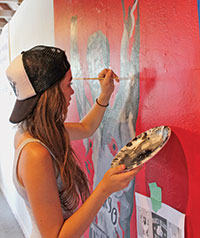 more artistic side of the mural, while Robert has focused on the lettering and technicalities.

“This guy was a tough guy,” said Rich Stoltenborg. “They called him ‘Thunder Gatti.’ He was a warrior. He wouldn’t back down. He was a very exciting fighter.”

The other half of the mural is dedicated to Marco Island resident Jimmy Downey. 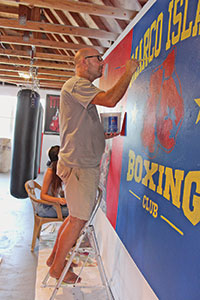 Robert fills in the lettering while Stephanie works on the image of Arturo Gatti.

Downey, a boxer himself, is responsible for a lot of the grunt work that went into getting the gym set up.

“When I finally found a space for the gym Jimmy was right there helping me get things together,” said Rich Stoltenborg. “He was a big help and I thought it would be a great idea to have his picture on the wall, as well as a surprise to him.”

The mural will be completed within the next few weeks.

“It’s coming along really nice,” said Rich Stoltenborg. “I’m impressed with it. It’s a very time consuming project and I appreciate everything they’re doing with it.”

For more information check out: www.marcoislandboxingclub.com or call 201-694-2182.