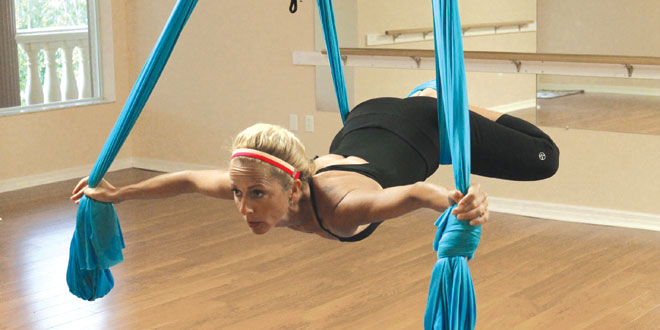 I hate to sweat. It’s true. I don’t mind the type that comes from your typical Florida heat, but to work out, get my heart rate up and have sweat pouring down my forehead is just not my style. So when I was assigned to write about Margaret Lamp’s Booty Barre class – which included actually taking the class – I was unbelievably surprised at how I didn’t mind sweating through the hour-long experience.

I use the term “experience” with purpose. Booty Barre is not your average workout class by any means. “It’s an infusion of ballet, dance, pilates and yoga,” explains Margaret. “It was founded by famous fitness instructor Tracey Mallett of California.” After hearing about the class and knowing it was offered in North Naples, Lamp decided to take a course to become the only certified Booty Barre instructor for Marco Island. “I’ve always wanted to learn ballet,” she states, explaining that many ballet terms, such as first 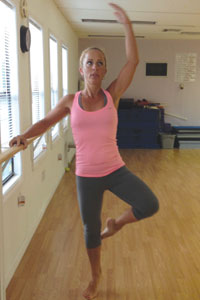 position, second position, relev’e and plies are all utilized in the class.

For all the others out there – like me – who always wanted to be a ballerina at heart, this class offers some fun fundamentals of the dance while offering a great workout at the same time. I often felt graceful during the class. I felt like a real ballerina, up on my toes, arm delicately curved up and over my head.

Booty Barre isn’t just about ballet. It’s a full body workout that incorporates three to five pound weights at times, exercise balls and, of course, the ballet barre. Small pulsing movements target muscles in all areas of the body, with an emphasis on form and alignment.

Feeling my muscles tense and work even harder than I thought they could made me feel empowered. So when Margaret said, “OK everybody, grab your balls,” I laughed to myself even though I knew she was talking about the exercise balls. What she said 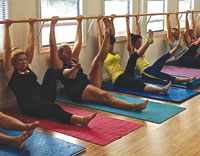 Yoga/pilates mats are used, bringing another workout aspect into the mix.

just seemed appropriate for how I was feeling in that moment – powerful.

And then there’s the booty part. Certain moves are definitely aimed at defining the derrière. The moves are rhythmic in nature and feel like you’re dancing. And I’m going to say it – they make you feel sexy! How could I be sweating, loving it and feeling sexy all at once? This class was simply like nothing I had ever tried before.

Margaret mixes up the routine quite a bit, moving from one style of exercise to another and even incorporating the different styles into one specific move or series of moves.

“I love it,” adds Margaret, speaking of Booty Barre as well as working out as a whole. “I was always heavy set. I moved to Marco in 1994, and I wanted to make a change. I first worked at the Marriott and I started exercising there. It just continued from then on.” Since then, Margaret has become certified in 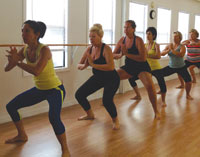 Talk about a booty lift! Nothing like squats to get your gluts sky-high!

But as for the Booty Barre class, “it’s a low impact, quick paced workout,” says Margaret. “An hour doesn’t seem like enough time at all. You’re in for some serious body shaking and sculpting.”

I for one agree on the latter, but an hour works just fine for me! And to Margaret, as promised, I will return for another class. After all, where else can you go to feel graceful, empowered and sexy all in one place?