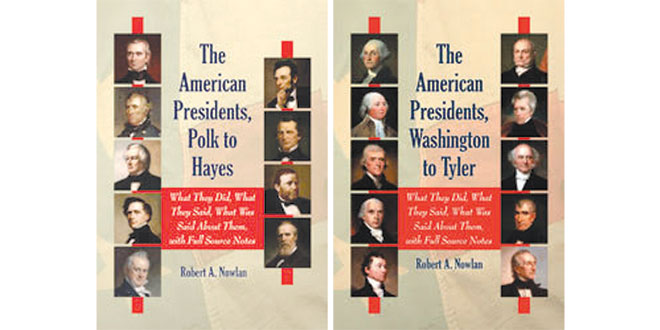 Submitted By Marco Island Friends of the Library

Neither Saints nor Demons

Human, All Too Human

Join the Marco Island Friends of the Library for coffee, tea and a continental breakfast as they present author Robert A. Nowlan. The event will be in Rose Hall at the Marco Island Branch Library on November 6, 2015 at 10 AM.

Dr. Nowlan will discuss his book, “The American Presidents, Washington to Tyler: What They Did, What They Said, What Was Said About Them,” the first volume of a multivolume set on American presidents which covers the lives of the first 10 presidents. Within each chapter is a thorough account of each president’s term, including major events in foreign affairs, primary-source documents by and about him and, in some cases, how each president was viewed by his contemporaries and the other presidents as well. There is an extensive collection of illustrations, which includes images of the men as well as major events from their presidencies.

As his current works include biographical information about the presidents to follow the first ten, his presentation will also focus on trivia and human interest stories about other of our presidents that are no longer living. A book signing will follow.