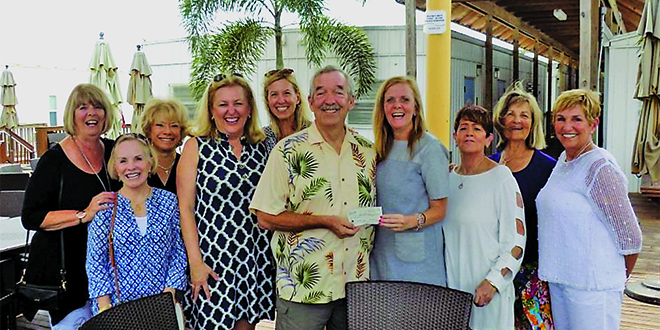 Barbara Dines and her husband Tom moved to Marco Island in 2007. Barbara brought along her love of reading, which was nurtured as a college English major and as an elementary school teacher in Colorado. Upon arrival, the Dines joined the Newcomers Club on the island and soon made many friends. Among them were Cindy MacQuarrie and Mary Lou Watt. In the spring of 2015, Barbara, Cindy, and Mary Lou got together to discuss starting a book club. “We knew that Barbara was an avid reader,” said Watt, “She was always mentioning books she had read. Her enthusiasm and knowledge of literature would have been a great fit for a book club.” The three ladies decided to plan over the summer and then start the book club in the fall. “Barbara Dines was the logical choice to run the club,” said MacQuarrie,” “She had read hundreds of books and would be able to make excellent choices for the club.” Tragically, the three women never got to plan anything together. During the summer of 2015, Barbara died suddenly at age 63, the victim of a major cardiac event.

Devastated, by Barbara’s untimely death, Watt and MacQuarrie must have looked at each other and thought “What’ll we do now?” “Our resolve became stronger than ever to go ahead with the book club,” said MacQuarrie, “It is what Barbara would have wanted. We decided to honor her and keep her memory alive by naming the club after her.” Watt and MacQuarrie felt Barbara’s loss deeply, “She was a close friend and had a lot of energy and enthusiasm,” said Watt, “She was a lot of fun to be around. We were so looking forward to working with her.” MacQuarrie agreed to run the club, and in the fall of 2015, the Barbara Dines Book Club was born.

MacQuarrie, a small business owner from Massachusetts, has lived on the island for 25 years. Using her Rolodex (I just like using the word), she recruited eight more members for the club. Mary Lou got in touch with Barbara’s daughter, and told her of their plans. Soon after, Tom Dines called and wanted to help. “Tom was thrilled that we were honoring his wife,” Watt said, “He felt that another way to keep her memory alive would be by donations of money for books to be awarded to persons in need. He wanted to furnish the money,” MacQuarrie began researching for groups that were in need of books. When she talked to an accommodating woman at Tommie Barfield ElementarySchool (TBE), she knew she 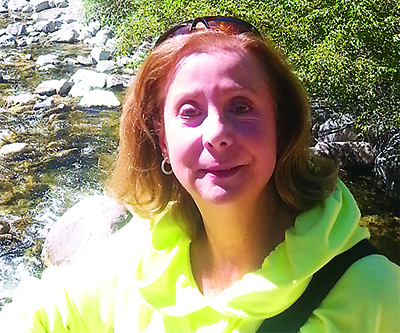 Photo By Tom Dines |Barbara Dines, shortly before her death in 2015.

had found their first recipient. “We are in desperate need of new textbooks,” the woman said, “Right now we don’t have money in the budget for them.” Tom was sold on this idea, MacQuarrie told me, especially since his wife had been an elementary teacher. And so, in the winter of 2016, the book club gave TBE a check for $2,000, with money lovingly furnished by Tom in remembrance of Barbara. “This went so well that Tom said he wanted to do this every year,” MacQuarrie said.

Finding a worthy recipient for 2017 wasn’t quite so hard. Mary Lou Watt is the mother-in-law of Marco Island Academy (MIA) Board Chair Jane Watt. Mary Lou has a granddaughter at MIA, with a grandson to enter next September. Mary Lou was intimately familiar with MIA’s need to raise money from private donors each year (in excess of $525,000 per year). Jane had just returned from a trip to Tallahassee, where she spoke to a state senate subcommittee about the need for more equitable state funding for charter schools. She told them that charter schools only receive 1/7 the amount of public funding as traditional schools, and that MIA had to raise over $3.5 million from private donors in the last five years, just to keep going. (See “Taking her Case to Tallahassee” in the March 3, 2017 issue of Coastal Breeze News.) Jane was moved by Tom Dines’ offer of $2,000 to buy books and wasted no time in setting up a luncheon meeting with Dines and members of the book club. At the meeting, Jane assured Dines and the book club members that a gift toward much needed books would help their academic program significantly. MIA’s constant struggles with adequate funding make this gift most welcome at this time, Watt told them. Jane Watt was so impressed with the group that she invited them all over for a tour of MIA’s campus.

Today, the Barbara Dines book club has grown to 14 members. It meets monthly in the members’ homes on a rotating basis. They read, discuss, and rate a different book every month. Barbara Dines still picks the books that they read. Tom has inventoried all of Barbara’s books and presented the club with 40 pages of the titles she has read. The club is working its way down Barbara’s list. Thanks in part to Tom Dines’ gift, the school will be presenting new history and marine science books to its students. In a nod to Barbara Dines perhaps, Elie Wiesel’s novel, “Night,” was also purchased for study in English class.