A visit to Joe Douglas

SEPTEMBER 2016: The results of 22 years exposure to the elements; the colors have faded and the paint is peeling.

I can’t remember a day quite like this since I became a reporter two years ago. Bonnie Hauke couldn’t either. Neither could Joe Douglas.

Bonnie Hauke is an accomplished artist who also loves the village of Goodland. She was married here on a sailboat, fortuitously to a sign painter, Kevin Hauke, whom she helps with their business, “Sign Artist” on Marco Island. You can see Kevin’s work on the signs at the entrance to Goodland Road and at Sunset Court on the way in to Goodland. You are much more likely to notice what Bonnie has done, along the same stretch of road.

In 1995, the then 25-year-old Goodland Water Tank was just that – a water tank. Bonnie saw it differently. With the help of Kevin she painted a stunning mural on it, featuring the flora and fauna surrounding Goodland. No one commissioned her to do this; she just did it. A labor of love she called it. It soon became the pride of the village of Goodland, a technicolor announcement that this was a special place. Over the

MAY 27, 2017: After Bonnie had been working on it for two months. She’s not done yet (her painting paraphernalia is visible), but the contrast is already startling.

years, through hurricanes, storms and blistering heat, the paint began to fade and then to flake off. Bonnie couldn’t bear to watch. By March of this year, she found herself back at the tank, restoring its former glory. How this came to be will be reported later this year. Suffice it to say that she and Kevin were back doing what they had done 22 years before – just for the love of it. She has been at it since March, working most mornings before the sun gets too hot, and fending off the salt marsh mosquitoes that have taken a fancy to her. She is still at it, trying to get it done before the rainy season sets in. As before, she wasn’t commissioned to do this (that is another story). “It was just something I had to do,” she said, repeating that it was “a labor of love.”

As the mural reemerged from the faded and peeling tank façade, more people started to notice. When it became apparent that Bonnie and Kevin were doing all this at 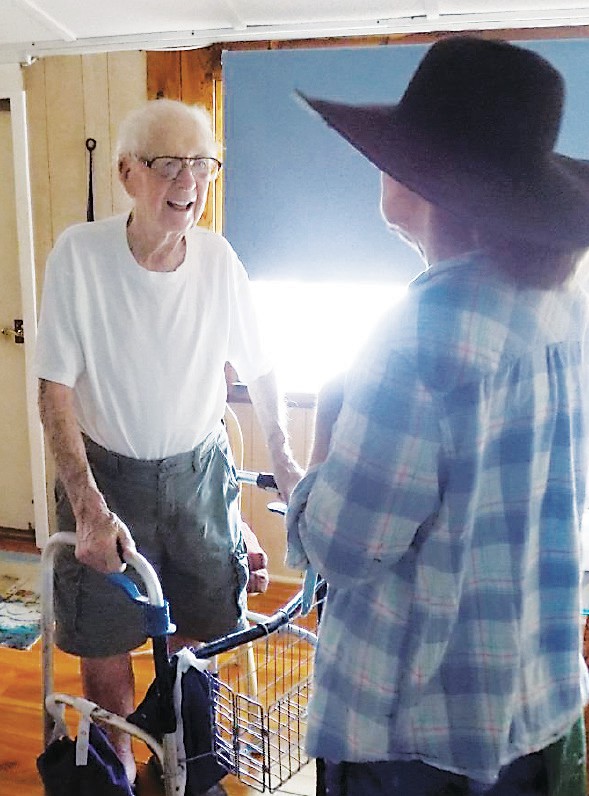 An emotional moment as a beaming Joe Douglas hears how much his donation meant to Bonnie Hauke.

their own expense (the county has since reimbursed them for some expenses), residents were looking for a chance to help. On April 18, the Goodland Civic Association (GCA) offered the use of their mailbox for anyone who wished to help out or just express their appreciation for the Haukes’ great work at the water tank. By May 31, $2,455 in cash and checks had been received. The last donation was in cash. It came from Joe Douglas.

Douglas is 93 years old, and until two years ago, was a ubiquitous presence in Goodland, pedaling his bicycle around town, mowing his grass and sailing his 28-foot schooner. Then cancer struck, and his bladder was removed, slowing him down considerably. This past winter, he broke his hip in a bicycle fall outside the Goodland Post Office. Many of us thought he had subsequently died as a result. No one knew what had happened to him. On May 27, I got a voicemail message from him, asking me to come over to his house. He wanted to make a donation to the 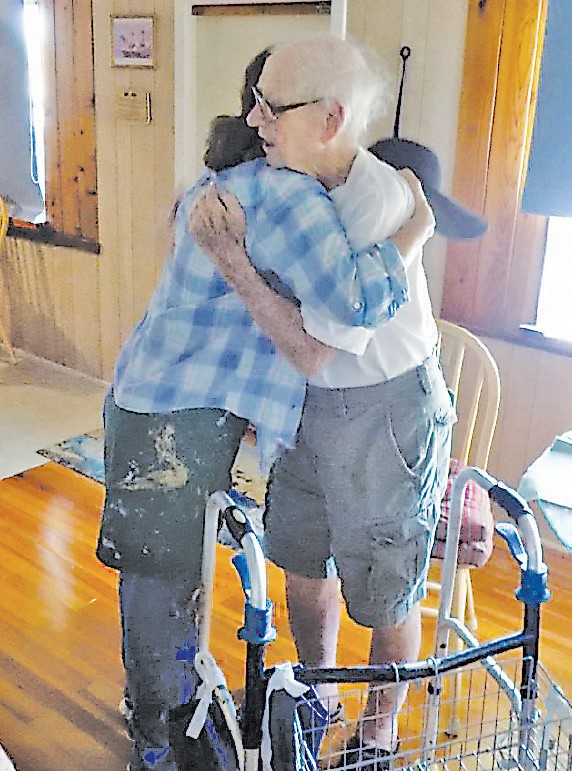 Bonnie expresses her appreciation in another way, as Joe gets a rare hug. Photos by Barry Gwinn

Haukes. Did I mention that Joe is a tough old bird? It turned out he had been discharged from the hospital the week before, and in checking his emails found the announcement from the GCA concerning donations. I went over to see him a couple days later.

At his instructions I knocked and let myself in. Joe lives alone now. Ivy, his beloved wife of over 50 years died last year. He is alone most of the time, and his visitors are few. When I walked in, he was lying on a couch, dead to the world, with his feet propped up to avoid accumulation of fluids. The AC was not turned on and the heat was oppressive. I had to touch his arm to wake him up; he is totally deaf without his hearing aid, which he only wears when he gets visitors. As he struggled to his feet, I could see the half full urine drainage bag strapped to his thigh. He empties it three or four times a day. It is his constant companion. Joe Douglas

As he does most mornings, Kevin delivers painting supplies to Bonnie at the tank.

can get around now only with an unsteady tentative shuffle, and depends mostly on his walker. We have a history, and Joe was glad to see me. “I am glad you came over,” he said. “Since I came home, I have been admiring the work being done on the water tank. It gives me a lift every time I see it. It is so beautiful. I want to do something for the artist who is doing the work. Something like this deserves our support.” With that, he reached into a not-bulging wallet and produced $50 for Bonnie Hauke. Joe has no bank account. His son Robert, who has power of attorney, takes care of him (quite well it seems) and handles all his financial affairs. Joe has made some wise investments along the way and is not wanting. After an hour and a half reminiscing with Joe, I went home.

As keeper of GCA’s post office box, all of the money had come to me. I sensed that Joe’s contribution might be the last to come in. Thirty Goodland 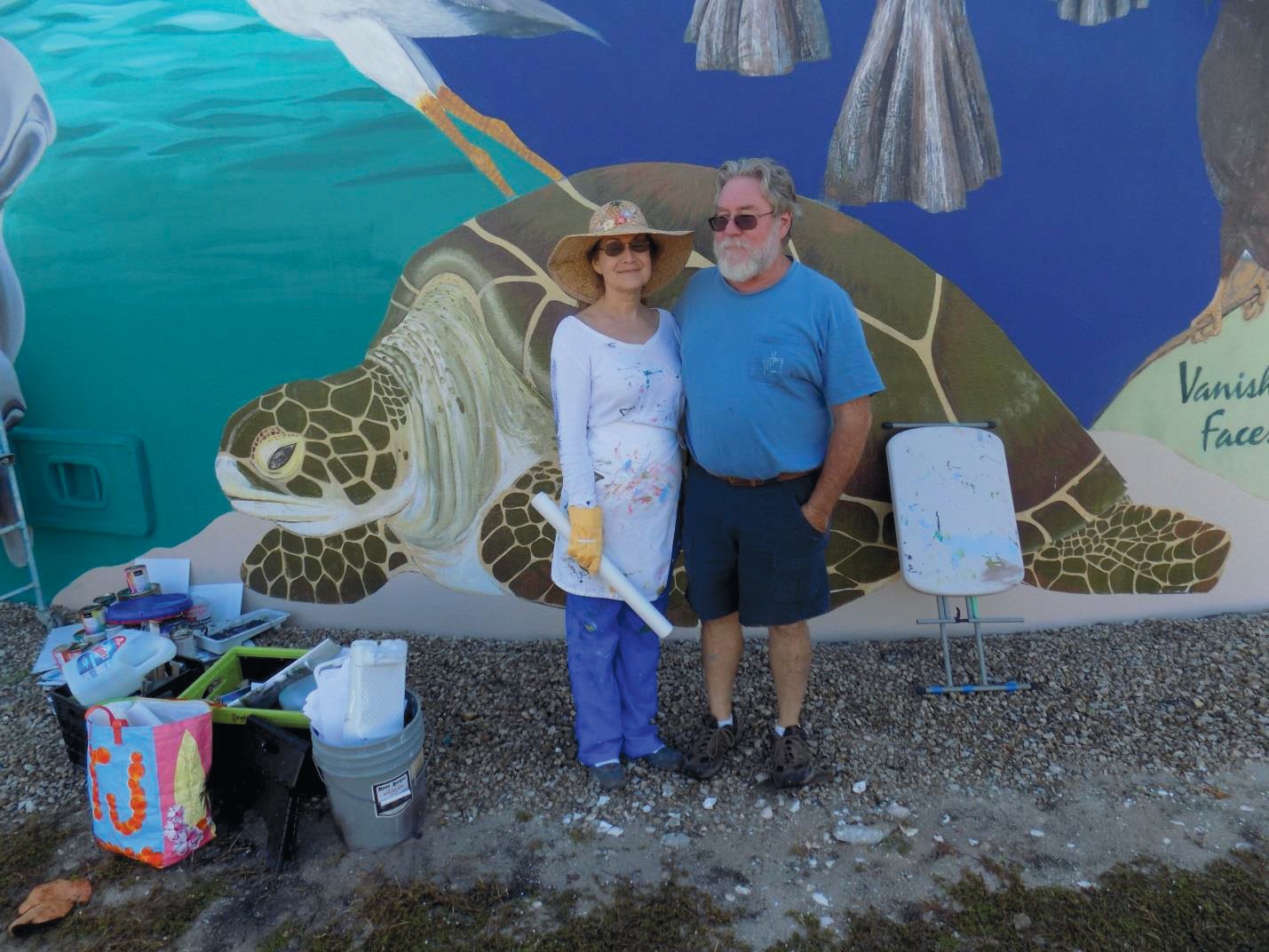 Bonnie and Kevin Hauke pose at the water tank before beginning another day’s work.

households had responded. A few days later, I took the donations along with the thank you notes over to Bonnie Hauke at the water tank, still painting and now surrounded with workmen and rumbling machinery of a construction crew laying a new waterline into Goodland. She was speechless; then the tears started to come. I had to choke back some of my own. “This is more than twice what our expenses have been,” she said, regaining her composure. “We are so grateful for this, but we never expected any payment. Kevin and I were married in Goodland and lived there for years. We have always loved it here. This has been our way of giving back.” I couldn’t resist telling Bonnie of Joe Douglas’s efforts to become involved. That brought more tears. It also brought a phone call from Bonnie after I had returned home. She wanted to personally thank Joe Douglas. We went right over.

This time Joe was sitting at his computer and the house was cooler. I’d like to think that the past few days had 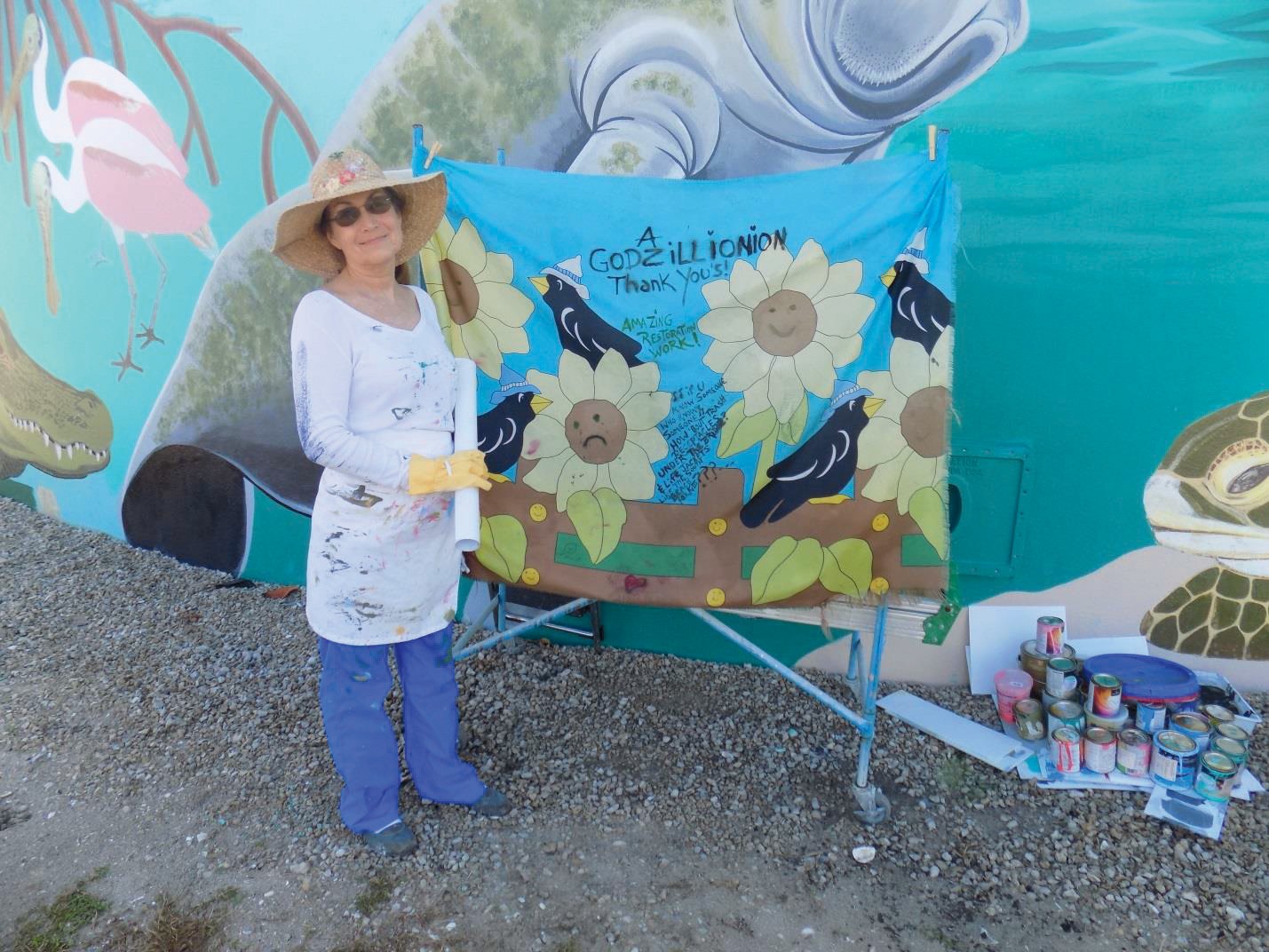 Some appreciative fans of Bonnie’s work left this tapestry with its message of thanks at the water tank. Bonnie hung it up so she could look at it as she worked.

given him a tad more zest for life. I am certain that what happened next did just that. After trying but being unable to adequately express her gratitude in words, Bonnie stopped talking and hugged the bejeebers out of the old man – not once but twice. Joe never knew what hit him. What looked like another dreary lonely day had been suddenly interrupted by the intrusion, attentions, and embraces of a pert and pretty lady, whom Joe had never met. He was visibly moved. Each had done for the other what neither had ever expected. In addition to the hugs by a cute gal, Joe Douglas, perhaps for the first time, at least in my eleven years here, was sought out and thanked for the encouragement he had given to another – something we all crave. For her part, Bonnie Hauke had finally realized firsthand and up close, the depth of the love and appreciation felt by the residents of Goodland, for who she is and for what she has done. It was a great moment. 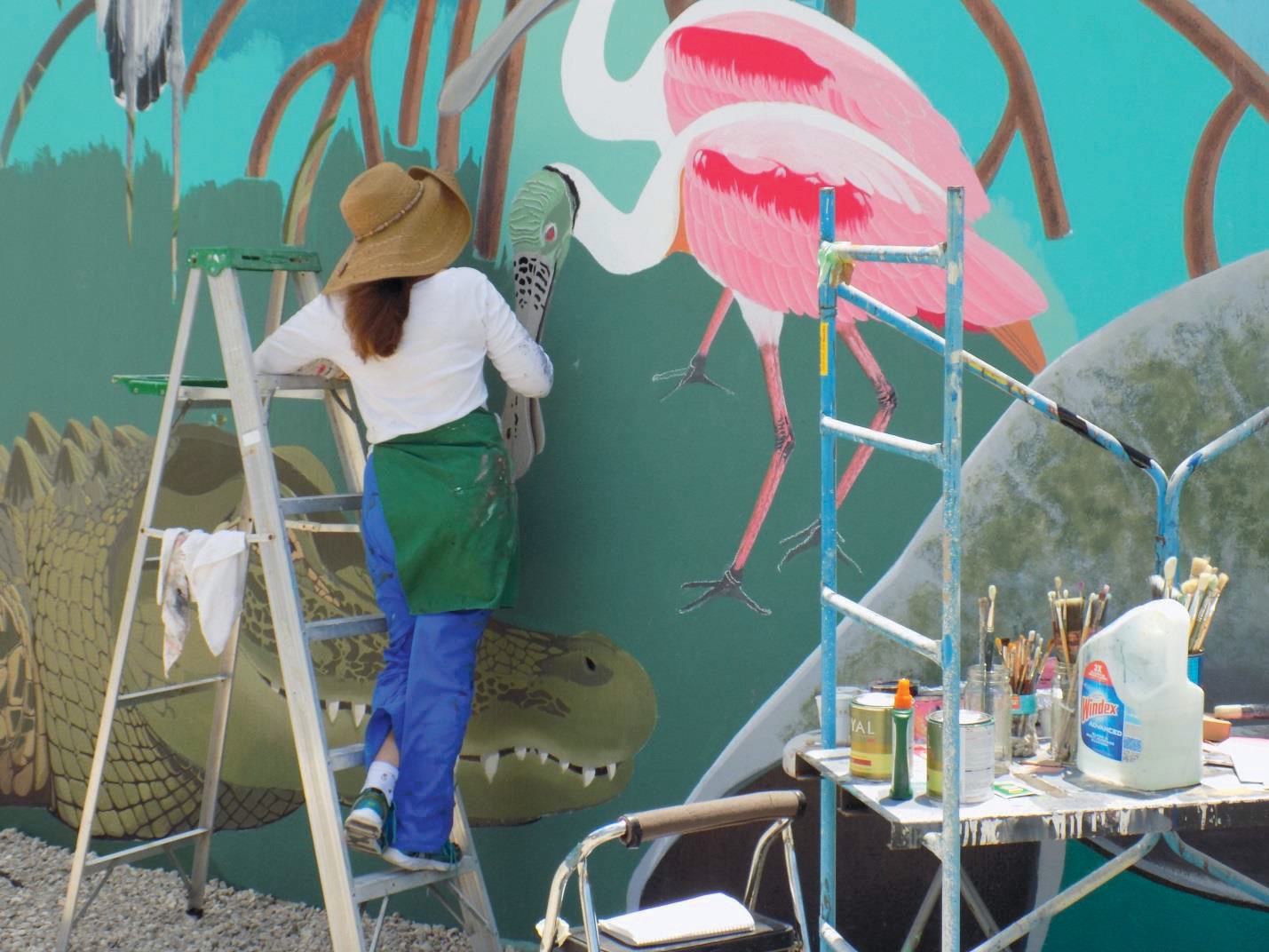 Bonnie at work in May 2017. Each brush stoke is carefully planned and applied lovingly.

second time in 22 years, Bonnie and Kevin Hauke, motivated by their love for the area, have taken on a monumental task, unbidden, unrecompensed, and until now, publicly unrequited. This article begins at the end of the second one of these tasks. A more comprehensive history of the Haukes and the water tank, perhaps in two parts, is in the works and will be written after Bonnie has laid down her brush and has had a chance to go through her memorabilia. For now, Joe and Bonnie deserve the spotlight.

On June 5, as this article was going to the printer, two more checks @$100 each came in. For those of you haven’t heard what’s going on down here, and want to express your appreciation, checks payable to Bonnie and Kevin Hauke may be sent to the Goodland Civic Association, P.O. Box 571, Goodland, FL 34140.