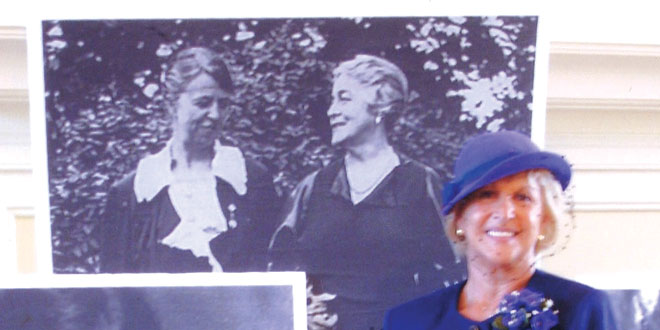 You probably don’t know Ruth Bryan Owen but you will be glad that you met her after seeing her portrayed by local actress Bonnie Bozzo. Mrs. Owen was the daughter of Williams Jennings Bryan who unsuccessfully ran for U.S. president three times but is better known for his part in the Scopes Monkey Trial opposite Clarence Darrow. But she is well known in her own right.

She was the first female representative from the south to be elected to Congress with her district stretching from Jacksonville to Key West. While there, as a friend of Marjorie Stoneman Douglas, she wrote legislation to create the Everglades National Park. She was also appointed as minister to Denmark by her good friend Franklin Roosevelt, at the urging of his wife, Eleanor. She later became the first woman delegate to the United Nations and helped in writing the UN Charter. The list of “firsts” in her life goes on and on.

It all sounds pretty dry until you hear about her personal life from the heart and mouth of Bonnie Bozzo who brings her personality quickly and humorously to life. When I interviewed Mrs. Bozzo she gave me a short, five minute version of a portion of her one hour performance. It was not long before she had me enthralled and grinning from ear to ear and determined to be first in line for a ticket for her performance.

Many of you may have seen her playing the part of Kathryn Hepburn, Margaret Thatcher, Maria Callas, Jackie “O,” or any number of the other famous women she has portrayed for various groups in past years. When 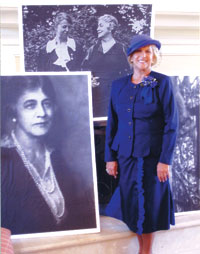 Bonnie Bozzo was the first woman delegate to the United Nations. SUBMITTED photo

I asked her how she comes up with her spot on portrayal of these women she told me “research, research and more research!” The first thing she looks for when coming up with her characters is strength. That requirement was easily filled in choosing Mrs. Owen as she had led an outstanding life as wife, daughter, mother, widow, divorcee, nurse, educator, advocate, politician, delegate and diplomat.

Bonnie Bozzo herself has not just spent her time sitting around thinking of new characters to portray. The wife of Dr. Alfred Bozzo, mother of six children, 15 grandchildren and one great grandchild has made herself a very active member of the Marco Island Community. She was one of the founding members and directors of the Marco Island Historical Society and has served on the boards of the Literacy Council and the Friends of the Library. She was the founder of “Just Friends” and has been an officer of many service organizations on the island.

Mrs. Bozzo’s reenactment of the life of Ruth Bryan Owen will be performed on the stage of the Rose History Auditorium at the Marco Island History Museum on February 4th at 2 p.m. Tickets can be purchased in the Museum Gift Shop for $6. There is limited seating available so those who are slow in getting seats may miss out on this delightful reenactment of a woman we should all know about.

This event is just one of many events planned throughout the county and state for the coming year’s recognition of “Viva Florida,” a year long celebration of Florida’s 500 years of rich heritage and diverse culture after the arrival of Ponce de Leon on our shores.