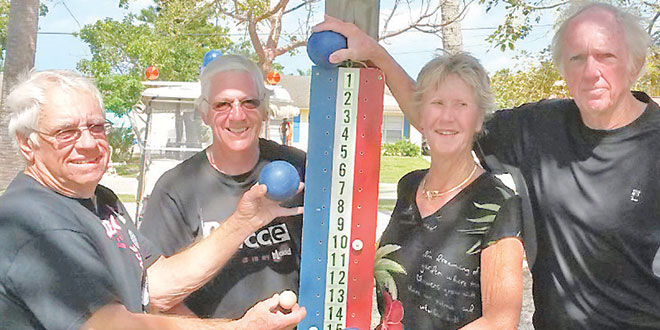 Bocce took over the Isles of Capri four days a week and on weekends when the team competition took to the court. Red and blue balls beat up the poor little white ball, playing in rain or shine, wind or calm, heat or cold. The measuring tape came out, as balls were close. At times there was no winner with equal distance between balls.

Seventeen teams with at least four members played two games a week during the eight-week season. They were in two divisions, A and B, and only played within their division until the playoff. Then on March 7, all teams participated with division A and B intermixed.

On the first day the brackets were even – half A and half B. Then teams in A took off dominating the rest of the play. The Beach Bums won the tournament from the Island Breeze. They were in the middle of the rankings for the eight weeks, and really peaked at the end.