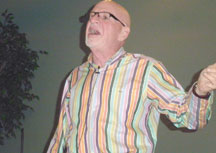 Bob Stutman, working to curb drug use, one community at a time

Collier County was recently honored by a visit from a national hero, a man whose civic duty went beyond what was expected and compelled him to interact with such high profile criminals as John Gotti and Pablo Escobar. Robert Stutman, a former Drug Enforcement Agency agent for 25 years, visited Collier County in order to give several presentations about the current epidemic of drug use across the country.

His visit was sponsored by many organizations including Iberia Bank, Drug Free Collier, Naples and Barron Collier High Schools. Robert had many places to visit, including New Hope Ministries. Robert spoke to the students at Naples and Barron Collier High Schools about the dangers and potential life long threats that come with drug use. After each presentation he made himself available for a question & answer session.

Before Robert’s presentation began at New Hope Ministries, I spoke with one of the students who attended his previous talk at Naples High School. Tori Hendry, a senior at Naples, spoke very highly of Robert and what he had to say about drug use in our community. She reported, “I learned a lot of information that I did know, especially information that I thought I knew, but discovered I was wrong. I’m grateful for Robert and his factual way of giving information.” One comment which surprised her was, “…never trust anybody who gives you a drug. He could claim that is has some substances in it, but most likely it has others that are potentially harmful to you.”

When asked what she would tell her fellow peers, based on a young adult’s perspective, She firmly urged, “stay away from drug use. It is an easy excuse to avoid reality, and will harm you and others around you.” She ended our discussion with these final words, “I’m glad that I had the opportunity to meet him and hope others will be as inspired as I was to stay away from drugs.”

After speaking with Tori, I had the pleasure of meeting with Robert before his presentation. His first comment was, “Please call me Bob!”

Bob is an extremely modest guy. He spoke very highly about all the students who attended the schools’ seminars. He claimed that “the children were very open about their drug use, which to me, is surprising. Most children at their age keep it a secret.” Some of the examples he gave about what the students had said tied in to the purpose of his presentation. “According to these kids, their parents are the main distributers of their drugs and alcohol. Apparently, a number of parents host alcohol parties at their homes and give their underaged children and their friends booze for the night.” What was even more surprising to him was the lack of care by the parents. He mentioned the students claimed that “our parents believe that our county is the ‘Pleasantville of the 1920’s.” “This is obviously not the case,” Bob explained.

He presented a statistic, which was specific to our own community. According to him, “Collier County is within the National Norm of recreational drug use.” He claims that this is both a good and a bad thing. “Even though your community may be within the national norm, it doesn’t mean that you are not in a tough spot.”

He offered another statistic which has quite a bit to do with our own community. “The Center for Disease Control has recently released a statement that ranks the leading cause of death in America as overdoses on prescription drugs, before automobile accidents & cigarette related deaths. A person dies every fourteen minutes due to a prescription drug overdose.”

How does this information tie into his previous discussion with the students from our local high schools? He ex- plains that “since these drugs are readily available and in most parents’ medicine cabinets, it is very easy for children to take advantage and steal their parent’s medication in order to abuse them.” He explains that this specific group of drugs, prescription medication, is even far worse than heroin or any other “hard drug.” The reason for this is the fact that it is nearly impossible to arrest the distributors of these medications, who are the doctors who prescribe them.

All hope is not lost, according to Bob. He ended his presentation with three final statements that could prevent your own children from drug use. First, he explained that “…the younger a child is when he or she first starts using drugs, the more likely it is for a problem to develop. Keep your eyes on your children and make sure they stay away from drugs.” Second, “as a predictor of drug use among children, be aware if your child starts smoking cigarettes. Those who do smoke are 12 to 16 times more likely to become a drug addict. So if they do, seek help.” And last, “the amount of times you have dinner with your children per week is an indicator of how likely they are to begin using drugs. The more often you have dinner with them, the less likely they are to become drug addicts.” He uses a great example to urge parents who claim they don’t have enough time for such dedication. “If Barrack Obama, the president of the United States, is able to take an hour out of his day, every day, to have dinner with his children, then anyone should be able to do so, as well.”

Bob surfaced information that I was unaware of and he opened my eyes to the issues that are currently affecting our community, inspiring me to want to take action in the prevention of drug use. If what he had to say affected you in the same manner, I have a suggestion for you. Anne Frasier, from Drug Free Collier, is sponsoring ‘Operation Medicine Cabinet,’ which invites anyone in the community to bring in drugs no longer needed for disposal. This is a no questions asked event, you may bring in any drug for disposal. Please refer to the website for more information, time and locations at DrugFreeCollier.org.