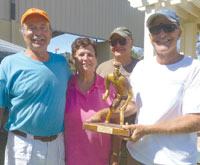 “The popularity of bocce has blossomed in recent years,” according to Marco Island Parks and Recreation Manager Mindy Gordon. “At Mackle Park, a group of residents play year round, every single day weather permitting. Groups such as the Italian-American Society of Marco Island have teams, and even some of the condo associations have formed teams now.”

More than 100 people attended the recent Italian-American Society Bob Ray Memorial Bocce tournament, co-sponsored by Marco Island’s Park and Recreation Department. In fact, 16 teams signed up for the tournament this year, and it was standing-room only around the bocce courts.

“It is very competitive. Players have become more sophisticated in their play; their skills have improved; and they LOVE the game. It is healthy competition,” said Joan Ray.

The tournament and trophy are dedicated to the memory of Joan’s husband, Bob Ray. The trophy awarded was sculpted nine years ago by Italian-American club member, player and friend, Jerry Leeman. Another plaque, featuring the names of the tournament’s winning team members is on display at Mackle Park throughout the year.