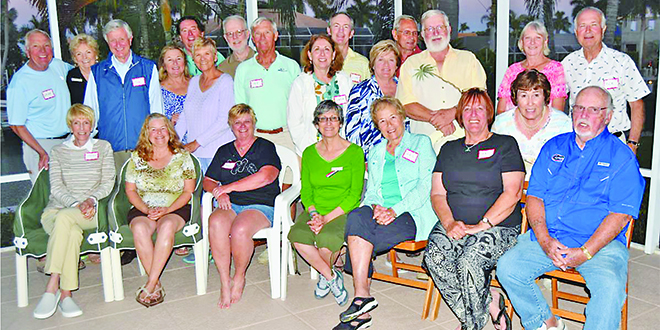 At 10 AM the crews boarded their craft and opened the sealed packets that contained the detailed instructions and the all-important (and sometimes intentionally confusing) clues. Six hours were allotted to find the answers to those clues, digitally photograph them and record it on the official tally sheet. Entries had to be returned by 4 PM. The marine boundaries were from the start of the Marco River near the Gulf to the Isles of Capri to the Jolley Bridge with only the North Barfield Bridge to pass under.

There were some 80 clues, some straightforward such as: “2016 World Champions.” The answer of course is the Chicago Cubs, and the digital evidence was a dockside pennant/flag of the 2016 world champs. Or, “It Stinks,” with the answer obviously the Marco Island sewer treatment facility. Another clue was “Sweet Scented Marina,” a clear reference to Rose Marina. Other clues were not so easy. Some were quite oblique and mysterious: “dragon lights the way” or “five palms gone 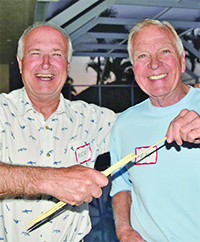 to pot” or “flying pig for dinner.” The answers to some of the clues remain known only to the organizers!

The day ended with a pizza and wine party at the home of Andy Battaglia, where the winning team was announced. The team of members Stosh Kott and Karen Urso and their guests Bill and Carol Carson, all first time participants, were flabbergasted when their names were announced as the victors. The boat of members Jerry and Lori Williams with Jim and Teri O’Connell, also members, as crew were awarded honorable mention for having traversed all the way from the Port of the Islands to participate.

A ceremonial drawing of the short stick resulted in Gene and Wanda Burson winning (or losing) the job of organizing and importantly, designing the hunt for next year. The day ended with all participants attesting to a great day on the water enjoying the sights and sounds of Marco Island and relishing the goodhearted competition. And, as always is the case with Squadron events, a good time was had by all.

Why not join Marco Island Sail & Power Squadron and learn about boating safety? We welcome you to “come for the boating” and “stay for the friends.”