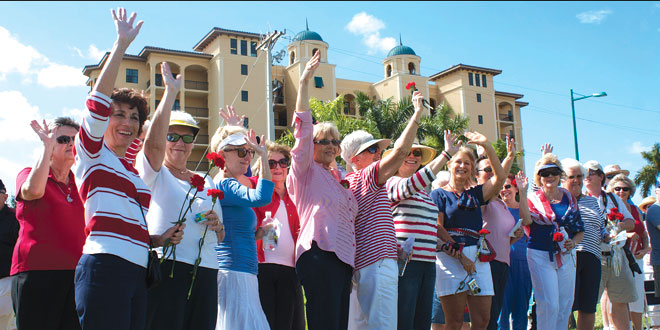 The ladies of the Calusa Garden Club. Their tremendous effort brought the Blue Star Memorial to Marco. PHOTOS BY NATALIE STROM

Dale Defeo, president of the Marco Island Calusa Garden Club led the unveiling, explaining the importance of the Blue Star. “Since World War II, the Blue Star Banner hung in the front window indicates that a family member is serving in the armed forces… this banner is a blue star on a 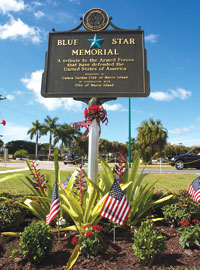 white field surrounded by a red border, and it was the inspiration for the Blue Star Markers.”

The symbol became a national sign in all major wars except for Vietnam, Defeo explained. If a soldier died in battle, a gold star would replace the blue. If they were seriously injured in the line of duty, the star would be changed to silver.

“In 1946, National Council of State Garden Clubs, now National Garden Clubs, Inc., founded the Blue Star Memorial Marker program as a way to honor all of our service personnel across the country.”

“Through the years, members of the Garden Club have 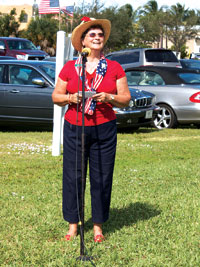 been asked, ‘why do we get involved with a veteran’s memorial?’ The succinct answer is that Garden Club members are the mothers, fathers, wives, husbands, sisters and brothers of our military personnel. And, yes, we do have a good number of men in National Garden Club!”

Community Affairs Director Bryan Milk and Chairman Joe Batte came forward to remove the covered sign, unveiling it for all to see. Many took pictures next to it, including the tremendous amount of Marco Island Garden Club members in attendance.

Located at Veteran’s Community Park on Marco Island, the Blue Star Memorial couldn’t have been placed at a more fitting location.