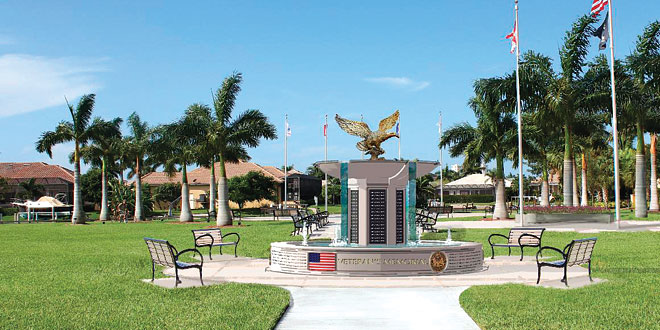 The Blue Star Memorial Program has been in existence through National Garden Clubs movement for more than 65 years. National Garden Clubs, Inc. is committed to placing Blue Star Memorial markers on our highways, in parks, and on public grounds to honor our nation’s Armed Forces. The Blue Star program became an icon in World War II and was seen on flags and banners in homes and businesses for family members away at war.

There are now thousands of Blue Star markers across the country; 150 in Florida alone. Rosenberg indicated the Calusa Garden club 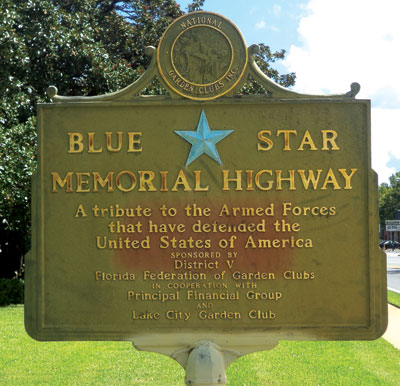 A Blue Star Memorial Marker similar to this one in Lake City, Florida, will soon honor our our nation’s Armed Forces at Veteran’s Community Park. SUBMITTED PHOTO

would pay the $1350 cost. The Veteran’s Memorial Committee will supply the concrete foundation for the installation.

The Calusa Garden Club President spoke as to the significance of the Blue Star Memorial Marker honoring our love of country and armed personnel. The only requirement of the City would be to irrigate the garden by tying into the existing sprinkler system.. The proposed installation of the Marker would be near the corner of the Holiday Inn and Park Avenue. “The marker is 41” high and 45” wide. It will stand approximately seven feet high when erected. Affordable Landscaping is assisting with the cost and installation of a garden area around the marker. We would like to hold the dedication on Veterans Day, November 11, 2013,” said DeFeo. Maintenance of the sign, needed about every ten years, would be the responsibility of the Calusa Garden Club.

A motion to approve the project was made and seconded. The motion was carried unanimously. The project will now go to the City Council for final discussion.