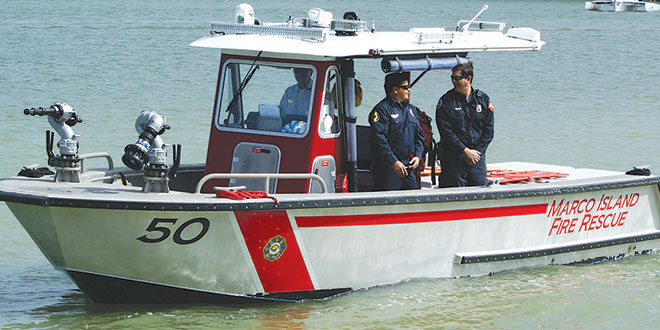 The Blessing of the Fleet is a time-honored tradition whose origins can be traced back hundreds of years. It first began in the coastal areas surrounding the Mediterranean Sea, and is rooted in Catholicism. Today, many ports across the United States, and all over the world, take part in the blessing ceremony in order to ensure prosperous seas and safety for their boats and the people on them.

Since 2001, the Marco Island Yacht Club (MIYC) has taken part in this global tradition for its members. However, this year they decided to do things a little differently. On Saturday, February 20th, MIYC held the their annual ceremony and for the first time opened it up to the public, 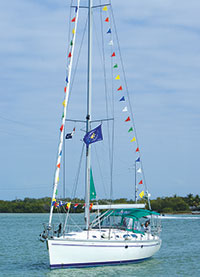 allowing anyone with a boat (or a wave runner) to stop by and get blessed.

It was a sunny but cool morning. The blessing began with Chaplain Richard Blauw reciting Psalms 127: 1-2, a traditional verse sometimes used in these ceremonies. The verses he says, “speaks about the vanity of living our lives without an awareness of God’s presence.” After Blauw’s blessing, the boats made their way across the back of the club, where they were greeted with a salute from Commodore Randy Harris, Chaplain Richard Blauw and Rear Commodore Bob Winterhalter, all dressed in their crisp, white uniforms. The Marco Island Strummers played a little tune each time a boat passed while Yacht Club members, watching from the dock 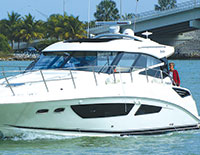 Ellie and Dave Everitt on their boat, Class Sea.

with drinks in hand, cheered on.

Overall 21 boats and three wave runners were blessed. Boaters came from all over Marco, adding a nice variety to the ceremony that was previously a members-only affair. It was a mix of MIYC members, non-members, and even city officials such as Marco Island Fire Chief Mike Murphy and his wife Barbara who headed the wave runner crew. The Marco Island Fire Rescue, J.W. Adam’s boat, was also present that day, as well as Marco Island Police Chief Al Schettino with Marine Officer Josh Ferris and Sergeant Matt Goetz on the police boat.

Now that the “fleet” has officially been blessed, it’s smooth sailing ahead. Or as Commodore Randy Harris says, “calm seas and a safe return” for boaters.