Blasting Ahead to the ‘Battlefield of Brotherhood’ 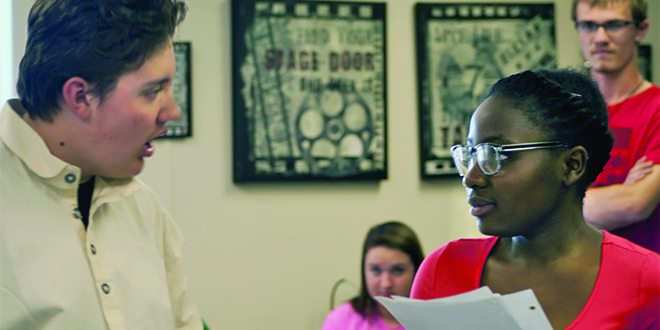 Photos by Jory Westberry | Ryan Sullivan as the Plantation Overseer, Henry Hodges, berates Sophonie Desvaristes, as Mama Hayes, in a scene from the play as Lenka Okenkova and Eddy Ludwigsen look on.

Attending a rehearsal with the cast of the upcoming performance of “Battlefield of Brotherhood” is like being pummeled and then revived. Let me explain.

The play, written, produced and directed by Gina Sisbarro, showcases the often misunderstood, but clearly the reality of relationships between the southern plantation owner and family with the plantation overseer and his family. There’s slyness, jealousy, violence, passion, angry eruptions and honesty – a lot of honesty.

Some scenes make you jump out of your seat and some bring you to tears. It’s the pummeling of your senses and preconceived ideas that make you question the play’s authenticity, but in your quieter moments, you realize that this production depicts the reality of the human spirit and maybe, just maybe, you’ll feel a sense of embarrassment and understanding about your original thoughts.

At the most recent rehearsal, I was challenged to take a photo that wasn’t blurry because the action was fast and furious. (Who was I to ask them to pose and pretend – I was too drawn into the scene for that technicality.) You’ll see what I mean when you attend the performance.

I asked the actors before they started the rehearsal, “What was the hardest thing they had to face when doing this play? And what have you learned?”

“I had no experience with (white) kids, everybody was different, but it was a nice different.”

“It was hard to be mean in this role, because I’m not a mean person.”

“This is a very edgy play, so much rough material.”

“My character is so rotten; zero of the character will transform to myself.”

“It made me realize that there was controversy between interracial relationships and that there was more that went on during the Civil War than we knew.”

“We still think that everyone is equal, but that this actually happened has made it much more real.”

“Our generation is blamed for all the problems, but this play has taught me what we can do in the future to be better.”

“It’s very realistic and sticks close to the truth, that’s what 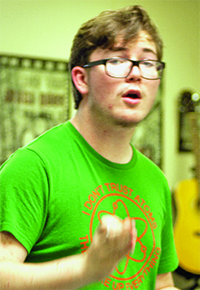 Abraham Lincoln, portrayed by Cooper Ussery, practices the speech he will deliver as the Civil War approaches.

makes it stay together.”

This is a performance that will make you think. The fact that students from three different schools are getting to know each other and facing the past makes for an interesting dynamic. Marco Island Academy, Lely High School and Marco Island Charter Middle School are represented and director Sisbarro looks forward to more collaborations in the future.

Gina Sisbarro is no stranger to acting and producing. About 20 years ago, she sponsored a Scary Story Contest for school age children in a state north of here. (What state isn’t north of here?) Gina transformed the winning story into a script with the author as the main character, along with family and friends. The result was a NJRPA State Award for Best Educational Program.

Today, the name Sisbarro is associated with many Marco Players performances as well as the YMCA where she began a summer camp acting program several years ago. You may have attended her last season’s production, “The Men of Rushmore and Their Wives.” She has contracted with the Marco Players Theater, Island Community Theater, YMCA, and the Marco Island Historical Society to produce her latest, “Battlefield of Brotherhood.” This spring, she will be taking her acting school over to the Greater Marco YMCA to offer acting classes from pre-school through adults.

Tickets for the “Battle of Brotherhood” are on sale at the Marco Island Historical Museum gift shop (Open Tuesday-Sunday) and the nights of performances on March 31, April 1, April 7-8 at 7 PM and afternoon performances on April 2 and April 9 at 3 PM. All performances will be in the MIHS Rose Hall Auditorium. School age children are free and adults are only $10. You won’t want to miss this historical, looking-glass to the past.