Blame it on Beckett 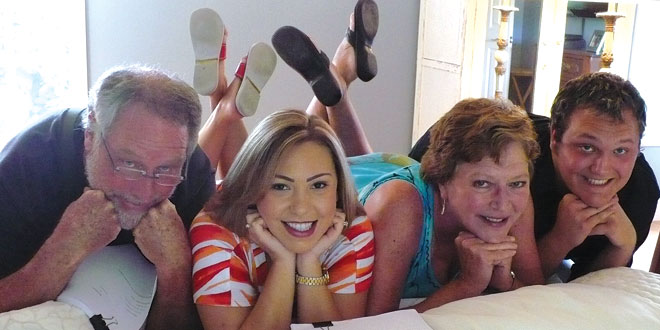 The Island Theater Company is pleased to announce the cast of “Blame It On Beckett.”

John Moulton made his stage debut earlier this year in ITC’s Mama Won’t Fly. He had several signature parts, including bar-keep “Mitch,” truck driver “Red,” and his most memorable and fashionably dressed character, “Spud Farley,” complete with spike heels. This is John’s first lead role.

Mai Puccio is a graduate of Bennington College with a BA in Theater Arts. She has appeared in many theater productions in Naples and on Marco Island, including Wally’s Cafe, Art of Murder, Crimes Of The Heart, Annie and Fiddler On The Roof. She gave an amazing performance in the lead role of Myrtle Dyrtle in ITC’s debut production A Bad Year For Tomatoes. She most recently performed the role of Myra Bruhl in Marco Players Death Trap.

Jared Wagner is a graduate of AADA in New York and has an extensive background in theater. In addition to performing in over forty shows from South Bend to New York to Marco, he includes improv in his list of credits. Earlier this year, Jared debuted on Marco as Clifford Anderson in Marco Players production of Death Trap. Some of his favorite roles include Mrs. Turnblad in Hairspray, Thenardier in Les Miz, Marcellus in Music Man and Dr. Einstein in Arsenic and Old Lace.

Abby Yetter began acting in community theater productions at age five. She graduated high school early and completed her B.A. in three years. She has a long list of credits in theater, film, television, commercials and voiceovers. She has been trained in acting, dance, and voice and has performed in numerous productions throughout Pennsylvania, New York and Las Vegas. Her favorites include Peter Pan, Annie, Les Miserables, and Rumors. 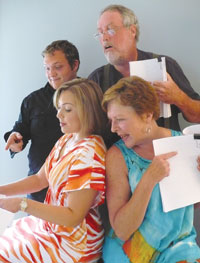 The cast of “Blame it on Beckett.” SUBMITTED PHOTOS

This is Abby’s first performance in Southwest Florida and with ITC.

“Blame it On Beckett” is an interesting look at human nature and the phenomenon of what people will do to get ahead. It is a theme that everyone can relate to on some level.

The main character, Heidi Bishop, is a wide-eyed dramaturgy intern, eager to better American drama. What she encounters instead is an endless stream of bad scripts by desperate playwrights, and a literary office filled with cynicism and turf battles, led by her bitterly hilarious boss Jim Foley. When Heidi’s efforts to improve things run into unintended consequences, she is forced to confront her idealism with reality to save her career, reputation, and relationships.

“Blame it On Beckett”, sponsored by Centennial Bank, will run for nine shows at the Rose History Auditorium, 180 S. Heathwood Drive, from November 1 through 16.

Tickets are $20 and can be purchased at Centennial Bank at 615 Elkcam Circle, or at the Marco Island Historical Society Gift Shop at 180 S. Heathwood. Tickets are also available online at theateronmarco.com, by calling 239-394-0080 or at the door. Evening performances begin at 7:30 PM. Sunday matinee performances are at 2:30 PM. Doors open half hour prior to performances.

The November 1 Opening Night tickets include the “Meet the Cast” party, hosted by Centennial Bank, immediately following the performance. Group discounts are available! To reserve seats for a group of ten or more, please call the Box Office at 239-394-0080 to make your reservations and receive 10 percent off on your order. Student groups receive additional discounts.

Volunteers are the backbone of any theater group. The Island Theater Company is always looking for energetic, fun, friendly folks who can help “behind the scenes” with set construction, painting, and technical support. Please call 394-0080 if you are interested or would like additional information.