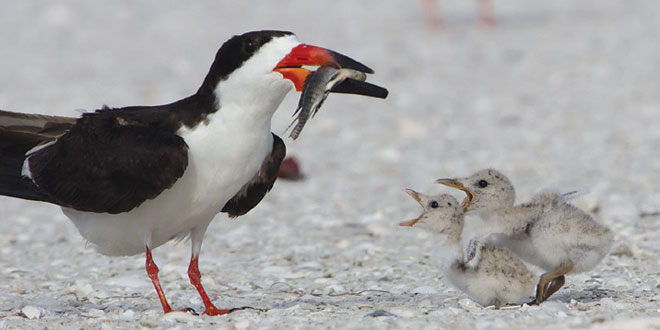 Skimming along our beaches and resting in our rivers, bays and canals, these birds are a common sight on Marco Island. Their presence is especially breathtaking in the early mornings and as the sun sets over the island. Black Skimmers slice our mirrored waters, cutting the surface like silk. With their bright orange-red beaks and legs, they add a certain majesty to the waters that surround us. This bird is one of the most tropical in North America… Really, who needs a toucan?

Black Skimmers (Rynchops niger) are gull-like in size, about 11 ounces and 18 inches long, though they have a wide wing span up to 44 inches. These long wings allow them to turn and swoop brilliantly. These skimmers are striking in markings and color just sitting on the beach. The male and females are quite similar; males can be slightly larger. Black with white under parts complimented by bright orange-red legs and beak, it’s a shorebird dressed in tux and tails, gracing the Marco Island beaches. Due to egg collecting and habitat loss, this shorebird is protected federally and by the state of Florida.

If you haven’t noticed them resting on the beach, you might hear their distinctive call, referred to as a bark. It’s a repetitive bark that inspired ornithologist R.C. Murphy in 1936 to state, “unworldly…aerial beagles hot on the scent of aerial rabbit.” You might think of them as “the Snoopy of the beach!”

They are also easily spotted flying down the beach edge, mouth open, skimming the waters just on the surface. Dragging the lower jaw of its beak, or mandible, through the water it searches in hopes of a fish dinner. Hence, the name, “skimmer.” It’s the only bird in North America with the upper beak, the maxilla, shorter than the lower beak, the mandible. The beak is very thin,

compressed laterally – almost knifelike – adapted to cut through the waters and snap shut to catch its fish.

At birth, the upper and lower parts of the beak are the same length, but at four weeks, the lower jaw is measurably longer, readying the young for its skimming ability for fishing. The diet preferred is fish from one to five inches in size. Some skimmers will travel up to five miles to have their fill. With the abundant baitfish in the Tigertail lagoon, Marco Island’s beach, bays and canals, the local and quite large population of Black Skimmers need not travel far.

Nesting begins in mid to late May each year on Marco Island. Particularly, the sandy stretch of beach known locally as Sand Dollar Island, really a “spit” of sand connected to the north end of the Marco Island beach, is a popular nesting spot. Stretching and meandering one to three miles and dynamic in its shape and length, Sand Dollar Island changes due to season, tides and storms. This area of beach is federally protected and managed by the state, named as the Big Marco Pass Critical Wildlife Area (CWA). This CWA was designated for the listed threatened species, Piping Plover, but protects the spring nesting Black Skimmers, Least Terns and Wilson Plovers – all of which nest and produce young in some of the highest numbers in Florida and actually, the planet. Symbolic fencing with signs to keep out of the nesting areas should be respected. Never is the beach closed to pedestrian access along the shore, but areas of historic nesting are posted yearly and moved accordingly to encapsulate the nesting areas of the skimmers, terns and plovers each season. The area is also one the “Great Birding Trails” named by the state of Florida

due to over 60 species of birds, most that are rare and protected, but nest, rest and forage in this ecosystem.

In the past years, due to the tides, currents and storms that change the profile of the sandy “spit,” numbers of nesting decreased compared to prior decades. The skimmers instinctively try to come back each spring to Sand Dollar Island spit as they prefer to nest on sandy, un-vegetated beaches. Black Skimmers nest in flocks called colonies. Studies have shown, the larger the colony, the more successful, as they rely on “mobbing” any threat or predator to the colony.

The nests are a simple “scrape” or a shallow depression of about an inch depth in the sand – both the male and female will make several “scrapes” with the male improving them constantly. The well-camouflaged scrape can be about ten inches or smaller in diameter. Up to three or four eggs are laid in the scrape in intervals of every other day or so. The female will stay on the eggs to regulate the temperature in the hot beach climate. The male will feed her and take over the eggs when she needs a break. Any time off the eggs could spell disaster – the eggs would bake in the sun. When the birds are “flushed” or scared off the sand to fly away, mortality to eggs and chicks is high in this harsh environment.

Since the Black Skimmers nest and feed so close to the shoreline, they were one of the species of greatest concern along the Gulf of Mexico coastline during the 2010 BP oil spill. Close to 300 skimmers were collected and treated for oil impacts in that year.

This past spring and summer, issues with dogs on the beach was the biggest threat to the nesting birds.

The Sand Dollar Island/Tigertail Lagoon ecosystem is within the incorporated limits of the City of Marco Island. The City’s Beach Ordinance prohibits dogs on any beaches in the City. Many signs are posted along the northern tip of Sand Dollar Island, but boaters still bring their dogs and let them run. Unfortunately, not only is this illegal, but a conflict for the conservation of the protected, nesting shorebirds of the CWA. The other impact is trash left on the beach. Trash attracts predators, such as raccoons, black crows, and fire ants, not typically found on a beach, but a threat to eggs and chicks of the shorebirds.

This year’s nesting season shows the numbers of nests and fledged young Black Skimmers were at the highest in recent history. Florida Fish and Wildlife Conservation biologists manage and monitor the posted CWA areas with the help of citizen scientist volunteers called the Collier County Shorebird Stewards. This group of hardy beach goers and avid birders are on the beach every weekend near a colony to share information to beach goers on the species of shorebirds, why they are protected and their importance to a healthy ecosystem and provide an opportunity to view the birds and chicks through a high powered scope. The Stewards’ presence improves understanding of why we all need to share the beach with wildlife.

By this time of summer, many of the chicks have fledged, or can fly, but there are still Black Skimmer downy chicks to be seen out on the beach. Take a walk, respect the posted areas and enjoy the beautiful birds on our beaches. Remember, no dogs are allowed on the Marco Island beaches and please remove all trash when you leave the beach.