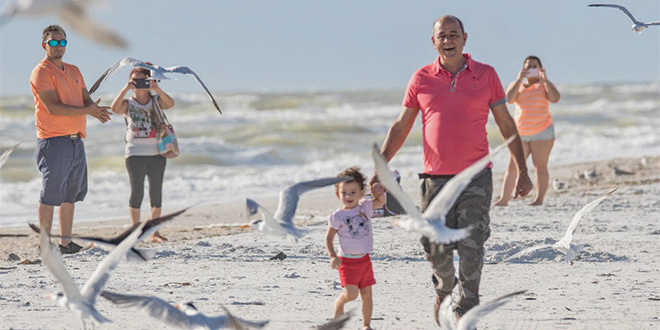 Please do not force birds to fly. The photo may look cool, but repeated flushing of birds is harmful to resting birds.

“Birds matter because they give us wings. And because if we save the birds, we will save the world.” ~ Peter Trail, USFWS forensic anthropologist.

It was a very busy summer for the shorebird stewards. According to Jayne Johnston, coordinator of the Collier County Shorebird Stewards, the summer volunteers logged 312 volunteer hours. Sixteen active stewards interacted with 219 members of the public. You can’t miss the shorebird stewards wearing their bright green shirts inscribed with their message, “Ask Me About the Birds.” Adam DiNuovo, Audubon’s biologist reported that the 2016 summer season was a terrific success due to predator control and stewardship. He added that Marco had one of the biggest colonies in the State of Florida, with over 500 black skimmer chicks fledged, along with over 400 least tern chicks.

According to Jean Hall, you get to watch the fascinating life cycle of the black skimmers and the least terns from their courtship rituals to chicks testing their flight feathers during the summer months.

During the winter season, the volunteers’ main task is public education and awareness on the importance of the migratory birds sharing the beach with humans. Audubon is calling for volunteers to ensure a successful winter season. As in the summer, the new stewards will be paired up with a buddy. Winter season is flexible on times and location, wherever flocks 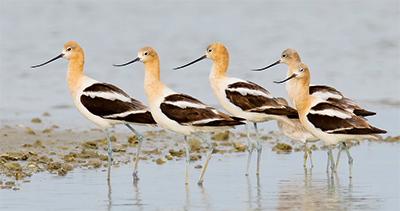 Photos by Jean Hall: American avocets are here! These long-legged shorebirds have been spotted in front of the Marriott hanging out with the willets and sanderlings. They have thin up-curved bills and distinct black and white striped pattern on its back and sides.

We are so lucky here in Marco Island. Our island is a critical stopover for thousands of migrating and wintering shorebirds. We have front row seats as we watch birds on our beaches that flew thousands of miles to come and winter here. According to Brad Cornell of the Audubon of Western Everglades, it is crucial for these birds to rest, feed and gain weight for the next leg of their journey, without human interference.

Something Special for Bird Lovers

Audubon Florida and Rookery Bay have partnered to offer a shorebird migration and ID class this winter. Class will discuss the incredible journeys of these birds. You’ll learn how to use plumage, size and behavior to help with identification. The classroom session will be followed with a trip to Tigertail Beach for the practical portion of the class. Adam DiNuovo will be teaching the class at Rookery Bay. If interested with the class or in joining the winter shorebird stewards, please e-mail Adam at adinuovo@audubon.org.

Sharing Our Beaches With the Birds