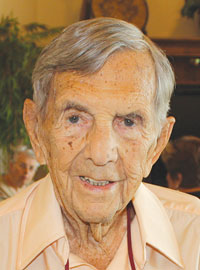 Only a few weeks ago, Coastal Breeze was pleased to write an article about “Grandpa Bill” Tiley celebrating his 102nd birthday in Marco Island, where he had lived for the past eight years with his daughter Dana Cleary until their recent move to the Tampa area. We are saddened to report that Bill passed away on August 12th after a fall at his home. He had looked forward to the day that he could join, in heaven, his wife Ginny to whom he had been married for 68 years. He made many friends while in Marco where he was frequently seen on the corner of Barfield and Bahama Ave. waving as people drove by. He had a smile and a wave for anyone who looked up to see him standing there as a part of his daily walk.

He leaves behind him, in addition to his friends of all ages and walks of life, his daughter Dana Cleary, who cared for him since his wife’s death eight years ago, and her three sons, Wes (Cathy), Doug (Kim) and Wade (Lynn) and their families, and his son, Dr. Fred Tiley (Candace) of Salem, Oregon and his family. No service is planned at this time. His ashes will be spread on the golf course in Sun City, Arizona where he loved to spend time with his wife playing his favorite game.

Donations may be made in his name to Avow Hospice in Naples who were wonderful to him while he lived in Marco (1095 Whippoorwill Ln. Naples, FL 34105) or to those who cared for him in his final days of life, Gulfside Regional Hospice. ( 5760 Dean Dairy Rd. Zephyrhills, FL 33541).