Bill Hughes Wows the Crowd with “Marco in the Making” 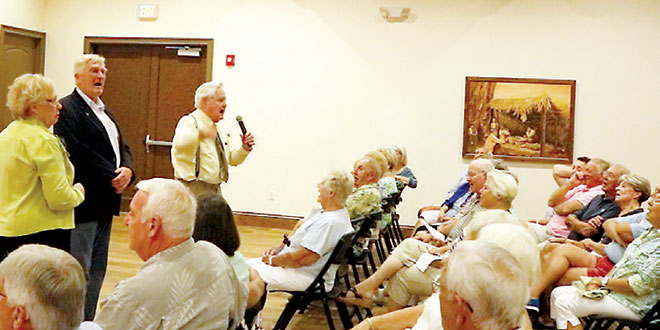 Herb Savage (with microphone) leads the crowd in a rousing rendition of “God Bless America”.

Due to technical difficulties, we now bring you…a song!

That was how the evening started out at Rose History Auditorium Tuesday, July 7. The technical glitch was solved but not before Bill Hughes, creator of the film, “Marco in the Making”, entertained the crowd with a short, fun monologue.

“That was great,” said Lyzz Tinges, a very pleased audience member. “Bill’s talk alone was worth the price of admission (which was $5 for non-members). And then you get the song. That was over the top!”

The song was God Bless America, and the leader was Herb Savage. Herb Savage is an architect that, in conjunction with the Mackle brothers, translated a vision into what Marco Island is today. An amazing person in his own right, the presence of Mr. Savage on this night was an exclamation point to the great film created by Bill Hughes.

Bill Hughes and BJ Henning look on as the film is about to begin.

was created by Bill Hughes and his company Hughes Productions. Using historical photos, video footage, and some wonderful aerial photography, all from the mid-1960s, showed how Marco Island was transformed into the paradise we enjoy to this day.

What got me hooked right away was the soundtrack. Mr. Hughes incorporated some incredible songs about Marco Island including the Marco Island song by Stan Gober. That name should be familiar to anyone in these parts (Think Stan’s Idle Hour on Goodland). Frankie Ray and his Marco Island song was also prevalent. The songs used in the film should be part of everyone’s backyard BBQ party.

The film also include interviews with Joe Garagiola, Ara Parseghian, Gene Sarazen, Jack Paar and more. It was the perfect fit as they talked about what made Marco so special. And that was 50 years ago. The film does an exceptional job of depicting the 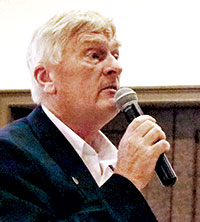 vision people had for our paradise and how that translated into the Marco Island of today.

Also presented was a film by Hughes Productions of Jane Hittler. In his introduction, Mr. Hughes says of Jane: “When you look at your roads and you see those beautiful medians and all those tree plantings, you think of Jane, and the original Marco Island Beautification Committee. This is Jane Hittler.”

It was close to a visual diary as Mrs. Hittler talked of settling Marco in the early part of the century. Jane Hittler is also the person who gave the first $1,000 to help build the Marco Island Museum. Jane Hittler Park is dedicated to her memory and contributions to our community.

Rose History Auditorium was full on Tuesday night, and more chairs had to be brought out to accommodate the enthusiastic crowd. “Wow, I didn’t think there were this many people left

Bill Hughes has fun with Herb Savage during the technical glitch. PHOTOS BY STEVE GIMMESTAD

on Marco this time of year,” said Mr. Hughes laughing.

If you weren’t part of the crowd Tuesday night, you can purchase a disc of the “Marco in the Making” for your home use. It is available at the History Museum. Just stop in. It will be a valuable and entertaining addition to your home collection.

You can get in touch with Hughes Productions through their website: hughesvideoproductions.com. Or call: 239-435-1188. You can view some of their other films and find out how they can work with you for any event or special occasion. They are located in Naples, and serve the Digital Media Market in a very personalized manner to aid in all your projects.

Staying with the theme of the night, BJ Henning, event coordinator, announced a special evening coming up. On November 14th, there will be “1965 Shindig” at the Rose History Auditorium. Mark you calendars and stay tuned for details.

Marco in the Making