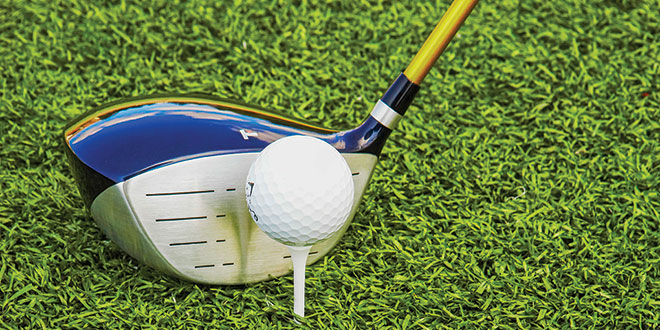 If you have ever read my articles you know that there is one myth that really bugs me. The myth is usually in the form of a free tip from a friend to “keep your head down” or after the shot, a playing partner will say “you lifted your head.” I cringe when I hear these statements on the range, or when playing golf with others.

Let us start with stating one fact. A golfer’s head should always come up during a golf swing. It is not a matter of if it happens, it is a matter of when it happens. Let’s do an experiment. Take a standing position, and try to lift your head. Impossible, correct? Now, take your golf stance, and try to lift your head. It comes up, correct? I assume you used your neck muscles. I promise that will never happen in the golf swing. No golfer uses neck muscles to move the head upward during the golf swing. So what happens? Why does your head come up, and why is it bad to try to keep it down?

As stated before, every golfer should raise their head, but many golfers’ heads rise before it should in the golf swing. One more experiment. Take your golf posture, and then push your hips towards the golf ball, or where the golf ball would be, until you are in a standing posture. This is how your head raises in your golf swing. The hips extend until you are in a standing position. If your hips extend early, your playing partners will say, “You lifted your head.” They would then proceed to tell you to keep your head down. However, they have not cured the root of 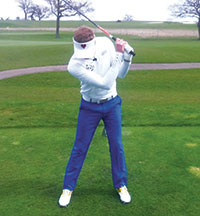 Keep your head down. SUBMITTED PHOTOS

the problem, because we do not physically raise our head during the golf swing. What happens next after the golfer listens to their playing partner? The golfer will early extend, and try to keep their head down at the same time. The human body was not designed for this movement. I call it the cat. Hips extended towards the golf ball, back arched or rounded, and chin buried in the chest. All while rotating as fast as possible…ouch! For a couple shots this might bring results, but after a few swings the body says “no more.” Then, no matter how hard the golfer tries to keep their head down, it is physically impossible.

So what is the correct fix for early extension?

I see two main reasons for early extension. One reason is physical. A player that is not capable of making the proper rotation in the hips and thoracic spine will usually early extend.

The second reason, and most common, of early extension is a swing flaw. A golfer must shift with the feet and legs towards the target to transition from the backswing to the downswing. This is a weight shift or a shift of pressure under the feet from the trail side towards the target. Many golfers start rotating to start the downswing. The golfer’s body will be fully rotated at impact if they start the downswing by rotating, causing complete extension at impact. Full extension is supposed to be at the finish of the swing.

Early extension causes multiple problems. The number one problem with early extension is the inability to control the club face at impact. The hands do not have a clear path to work properly. The hands move upward, and the club head works down. 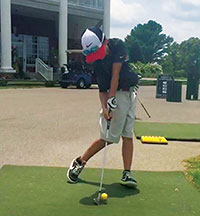 I hope you have learned something about your own swing, and how to correct it from this article. I hate to be so negative on this myth, but these two phrases can cause physical trouble, and trouble to a player’s golf game. The worst scenario for me is when a young junior golfer is being told one these phrases from their parent, grandparent or friend. Most juniors have the dexterity and are physically capable of keeping their “head down” almost through the entire swing, as seen the photo. This small tip can cause major problems later in their golf career.

I beg you, next time you go to tell someone “keep your head down” to think about the physical implication it could have on their body, and the lasting affects it will have on their game. Thanks for reading my rant, and go see a PGA Professional for a series of lessons if you want to improve your golf game.

Todd Elliott is the PGA Head Golf Professional for Hideaway Beach. Todd is TPI (Titleist Performance Institute) Certified as a golf professional. This gives him the ability to give golf specific physical screening to detect any physical limitation that might affect the golf swing. Todd is also a Coutour-certified putting fitter, a Titlteist-certified fitter and a Titliest staff member. Follow Todd on Twitter @elliottgolfpro or for any question or comments email telliott@hideawaybeachclub.org.