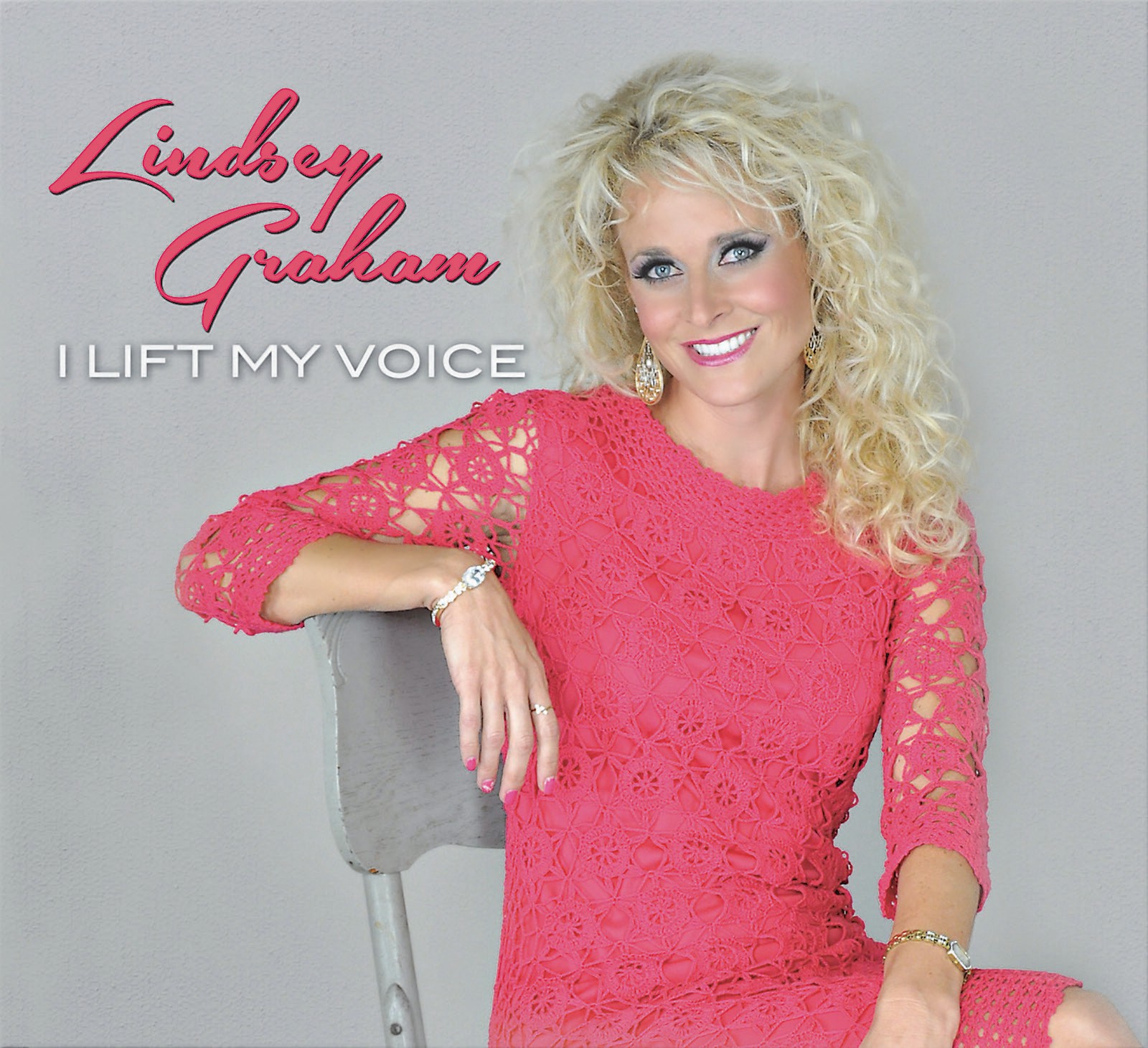 Submitted Lindsey’s latest album, containing her charted composition, “No Greater Song,” which she sang for the GBC.

es, Goodland has a church. It has only about 35 members, a

61-year-old pastor, no board of elders, and only one deacon, but it’s been around for as long as anyone can remember. (I will be doing a later article on its history.) We’re not just Collier County’s favorite tourist destination. On Sunday, March 12, this tiny undermanned church managed to snag one of the hottest tickets in Southern Gospel singing and the place was rocking. Lindsey Graham, renowned and much in demand, captivated the congregation with a repertoire of some of her favorite songs, finishing up with a rousing barn burner, which brought everyone to their feet, grinning, clapping and swaying in time to the music – sort of. Full disclosure: I used to be one of the soloists in a Gospel singing group of a large Phoenix bible church. I know a little something about what it takes to put on a show like this. This one was a first class professional program. I have never heard any better.

Lindsey Graham has been singing for as long as she can remember. Growing up as an only child in Hartford, Kentucky, her parents started taking her to Southern Gospel concerts shortly after she was born. Her dad was the 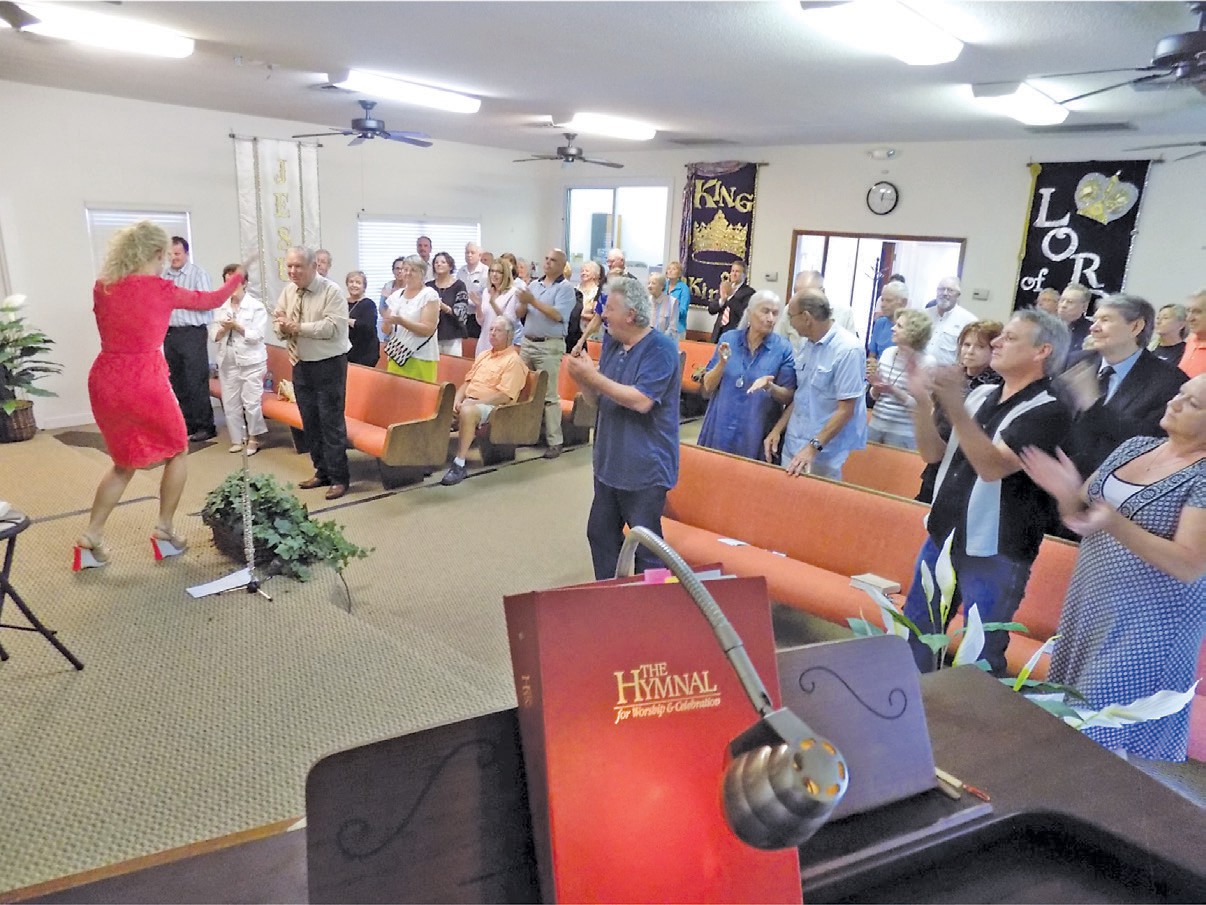 almost Been “ This rousing finale of I Wish I Could Have There” brought everyone I have heard, it was impossible their feet. One of the best performances to not to get caught up in the song’s rhythm and joy. Photos by Barry Gwinn

minister of music (and a pretty fair tenor) in a Baptist church there, and was soon including Lindsey in the music program. Early on, they began singing as a family at revivals, with Lindsey taking over the solo mike during the breaks. In 2011, after touring for a year with a Southern Gospel group, Lindsey contacted a booking agent and has devoted herself full time to spreading the Gospel through music. “My call from God to sing for Him came at the early age of eight years old,” says Lindsey, “Everything has pointed toward that calling throughout my life.” She has shared the stage with many of the Gospel greats and has sung in Europe, and even as part of a group at Carnegie Hall. She participated in the 2007 Bill Gaither Homecoming video, “Amazing Grace.” Gaither is easily the most respected, prolific, and productive writer and arranger of Gospel music in the U.S. We did a lot of his stuff in Phoenix, back in the ‘70s. Lindsey’s biggest solo audience came before 8,000 spectators at a Boston Red Sox spring training game in Ft. Myers, where she sang both the Canadian and U.S. national anthems.

Since 2011, she he has had over 75 engagements at churches throughout the 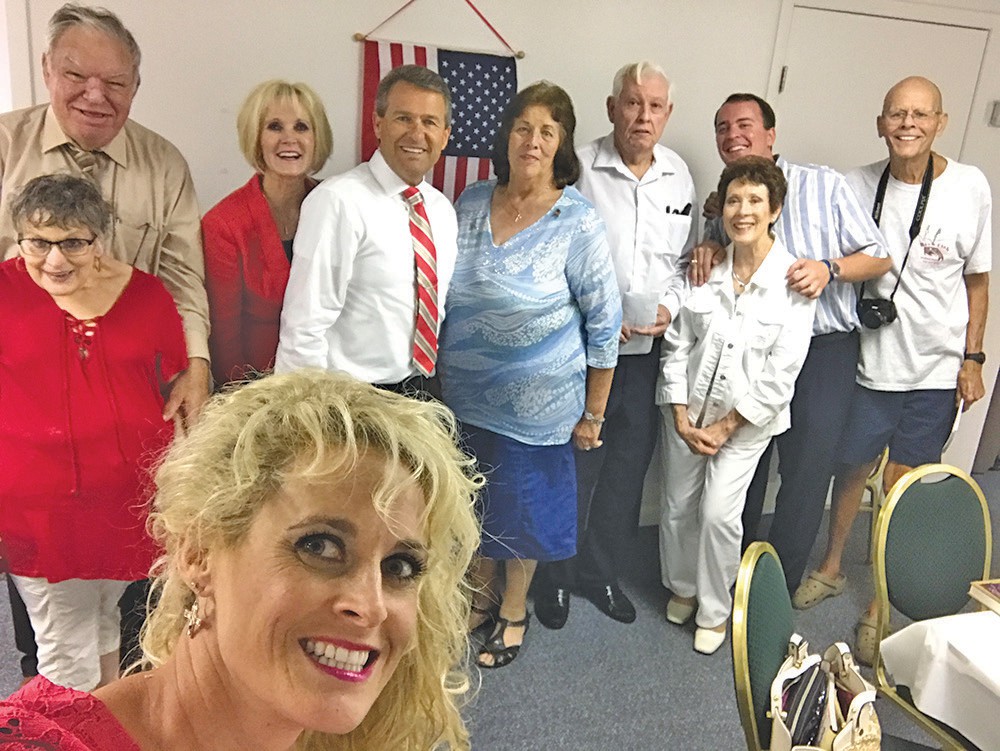 with Lindsey took this selfie following performance, a potluck supper her Pastor Richard At players in the day ’s festivities. From left: John some of the main Pixie and Greg Graham, Dorothy and Hughes and his wife, Virginia, appearance). Bev and John Boggs, and Barry Gwinn (in a rare Hearndon, Photo by Lindsey Graham

Midwest and South. No church is too small to merit her attention. “[Goodland Baptist] was not the smallest church I’ve sung in,” Lindsey said, “but it ranks pretty high on the list of the most hospitable, generous and kind churches we’ve ministered in.” From an audience of about 45 people, the always-generous Goodlanders left over $700 in the “love offering” plate in appreciation for what they had heard that morning. Those offerings, plus the sale of her CDs and giving voice and piano lessons is how Lindsey makes her living. She will never get rich doing this.

Lindsey has sung at the GBC before – about two years ago. She moved to Estero with her family 16 years ago and became acquainted with Alice Hearndon, a Naples resident, who with her husband, John, the head deacon, has been faithfully commuting to GBC since the 1970s. Alice had heard Lindsey perform at a Saturday evening service in Estero. Lindsey is continually honing her skills. She has a bachelor’s degree in music from Belmont University, has studied classical music with Dr. Jeannie Darnell at Florida Gulf Coast University, and is presently pursuing a doctorate in worship studies at Liberty University. She says that classical training keeps her voice in shape 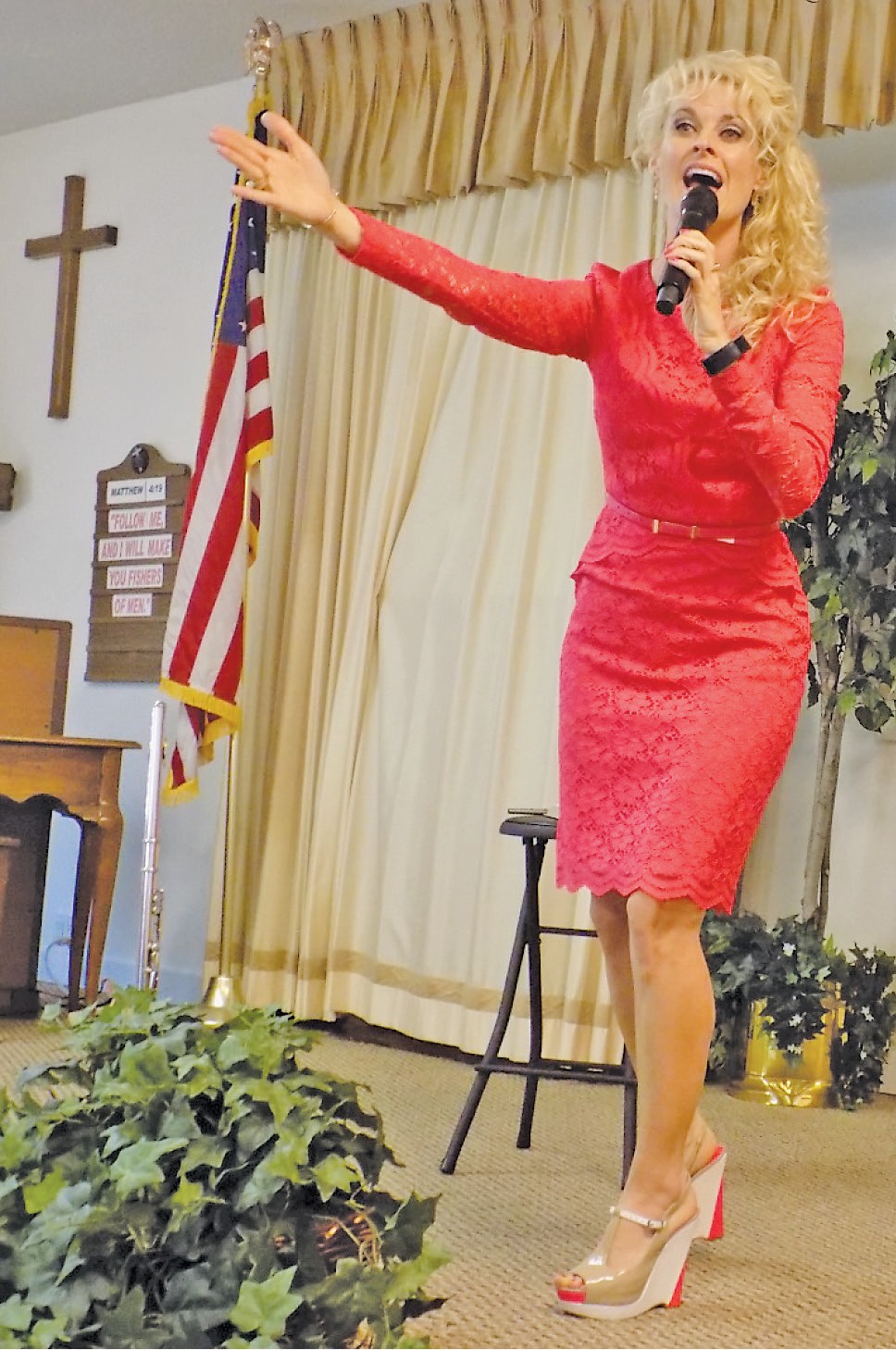 Putting her heart into “No Greater Song.

and reminds her to use proper vocal and breathing techniques. For good measure, she also performs with the Naples Opera Society.

Back in the day, the only accompaniment a Gospel singer had was a piano or organ. Most would bring their accompanists along with them or would accompany themselves. With the advent of magnetic recording in 1945 (a German invention discovered after the war – think reel to reel), which led to Hi-fi and stereo, vocalists making personal appearances were able to bring recordings of an entire group of musicians who had prerecorded the accompaniment to the songs. In 1975, the development of digital recordings (think compact discs) and modern sound systems made it possible to bring even higher quality sound to smaller venues. Thus, when Lindsey arrived at the GBC church on March 12th she brought along only a trunk full of equipment, her flute, and her mom and dad. With Pixie at the controls of the sound panel, Lindsey’s voice came through, full-bodied, soaring and clear. It sounded like the musicians were up on stage with Lindsey.

Greg and Pixie Graham accompany Lindsey on all of her performances and are an integral part of the team. Greg, a consultant for a Midwest manufacturing firm, does a lot of 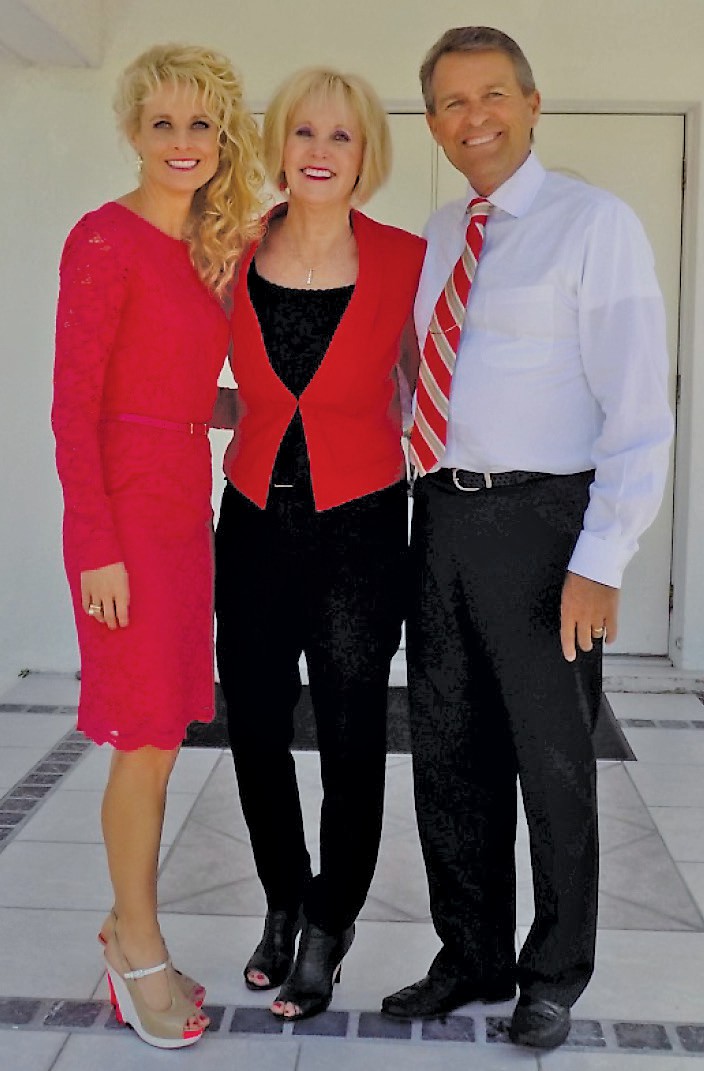 Lindsey with her mom and dad, Pixie and Greg. They sing together, work together, and live together.

traveling for his business but works mostly from home in Estero. Pixie, a retired elementary school teacher of 30 years, runs the sound equipment and sells Lindsey’s CDs at the back of the room. They also come up on stage for trios and duets with Greg. They are talented and attractive, lending additional warmth to Lindsey’s performances.

On this day, they combined for a rendition of “Oh, How I Love Jesus” and a Lindsey and Greg duet of “Beulah Land,” a popular New Jersey camp meeting song in the 1870s, which evinces a longing for heaven. Lindsey’s solos included some of her own songs, one of which “No Greater Song,” had reached the radio top 80 in the Singing News, the leading magazine in the Southern Gospel industry. This bouncy arrangement cleverly uses key changes and crescendos to make its point, likening Jesus’ life to a “song of creation.” She says she has been writing songs since she was a little girl but has only recorded three of them. More are on the drawing board. The congregation was rapt through the entire performance – eyes glued on the stage, little discernible movement, eagerly awaiting the next song.

But it was the finale which brought them to their feet. Septuagenarians,

octogenarians and nonagenarians, along with younger whippersnappers got up to cheer and clap. “I Wish I Could Have Been There,” a driving fast-moving Gospel song by The Perrys, leading Gospel artists, recounts some of Jesus’ miracles, following each with the refrain, “Oh, I wish I could have been there.” This was the best, most rousing performance of an evangelical revival song I have ever heard. I have listened to The Perrys sing it. They are good and have sold a lot of sheet music and recordings of it. Lindsey’s performance was better. “I want my music to inspire a response,” she says. Her sparkling stage presence, powerful voice and roving eye contact with the audience, had us all in a frenzy of joy and gladness that we were in that room, at that time. I could hardly fit the grin onto my face. Those that couldn’t make it can only wish that they had been there.”

For booking information, visit www.lindseygrahamministries or call the Dominion Agency at 828-454-5900.