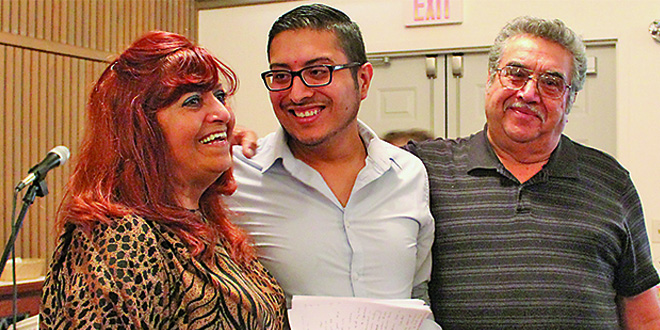 Ruben with his parents Eva and Ruben Sr.

On Nov. 16, Keller Williams Realty hosted its annual Thanksgiving Celebration luncheon at the United Church of Marco Island. This year, the potluck themed event was in honor of military members and veterans.

“One of our agent’s nephews, Jared Davis, passed away after returning from Iraq,” said Donna Cottrell, agent services director for Keller Williams. “When that happened, we decided to make our Thanksgiving feast in honor of him and to celebrate Thanksgiving for the military.”

The luncheon kicked off with a surprise of viral video proportions. Keller Williams agent Ruben Zamora, who is an active-duty member of the military, was called to the front of the room under the pretense that a phone interview with his mother would take place. However, it soon became apparent that Donna Cottrell had something else up her sleeve. With the help of the BT Hero House Foundation for Recovering Warriors, Donna announced that they were able to fly-in Ruben’s parents Eva and Ruben Sr., unbeknownst to him or the realtors. The audience erupted with applause as a stunned Ruben excitedly greeted his parents, who entered from the back of the room.

Brandi Tramazzo, CEO and founder of the BT Hero House Foundation for Recovering Warriors, spoke next. Her foundation was able to provide the Zamora’s with a one-week vacation here on Marco Island.

“As we prepare to celebrate Thanksgiving, let us remember that the first occasion that we celebrate in November is 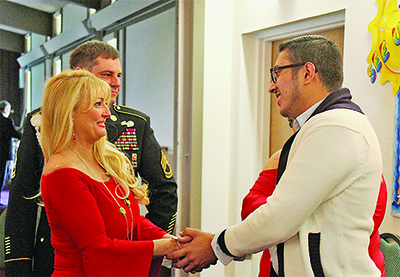 Veterans Day,” said Brandi in her opening remarks. “If it were not for our veterans, we would not have a Thanksgiving to celebrate.”

The BT Hero House Foundation provides all-inclusive family vacations on Marco Island for active duty military members, those returning from deployment and their families. The foundation focuses on service people who have demonstrated exemplary service, but are in need of rest and relaxation due to multiple deployments and burn out. 100 percent of all money donated to the foundation goes directly to military families.

Finally, Ruben closed out the day with a presentation about his military experience, as his parents looked on proudly from the audience. He spoke of how the events of 9/11 inspired him to enlist. He explained what it meant to him to serve his country and what it means to him now. He also emphasized how important it is to support veterans and active duty military members coping with PTSD.

“I had never even thought about the military,” said Ruben Zamora. “It never crossed my mind. But it was the only one thing that I could do to take ownership of the power I had lost. This is my country, one that has given so much to my family and myself.”

After his presentation, there wasn’t a dry eye in the building and Ruben was met with a standing ovation.

For more information on the BT Hero House Foundation, check out btherohouse.org.

A surprised Ruben greeting his parents.