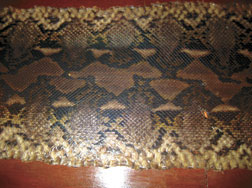 A closer look at the reticulated python.

The Skunk Ape Research Center in Ochopee, Florida has added a fascinating new piece to its collection of weird and wild. Stop at the research center and camp ground on US-41 to see and feel the skin of a 20-foot reticulated python.

According to David Shealy, owner of the Skunk Ape Exhibit, the reticulated python “was found on US-41 and Burns Road, which is located in the Big Cypress Reserve, about two-and-a-half miles from our shop here. The snake was found by a hunter on the side of the road and it was assumed the snake was run over. But when I skinned it I couldn’t find where a vehicle had hit it and there were two empty casings found nearby.”

Shealy and others in the area came to the conclusion that it was probably seen by someone driving by who simply shot it and left it. To shoot a reticulated python, or any other species of python that now live in the Everglades, is not necessary illegal. The species is one of six non-native constrictor snakes that can now be found in and around the Everglades. The worst invader, the Burmese Python, is now considered an established species, meaning that they have multiple breeding populations. Or more simply put, there are a lot of them out there.

According to Scott Hardin, the Exotic Species Coordinator for Florida Fish and Wildlife, “these species are not protected nor are they native to the area. As long as a person is 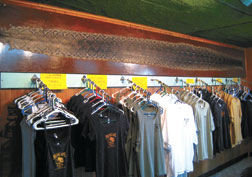 The length of the python is evident in this photo. The skin was actually too long to fit on the wall so the head was removed. PHOTOS BY NATALIE STROM/COASTAL BREEZE NEWS

within a zone where it is safe to shoot a gun, the snake may be shot.”

This may sound harsh, but the invasion of these species is considered to be a problem in the Everglades. They do not have many natural predators but are a very powerful predator themselves. The introduction of a non-native species to an area can often be disruptive, just as these pythons, especially the Burmese, have become.

Biologists speculate that the jump in python activity in the Everglades is due to human causes. Many people purchase a pet without realizing the care involved. For some it was easier to just release their suddenly large, powerful snakes into the glades. Hurricanes have also contributed to the problem. Breeders of constrictor snakes have lost many as a result of hurricane devastation.

Due to such carelessness, constrictor pythons may no longer be kept as pets as of July 2010, in the State of Florida. Those who already owned large snakes were able to be grandfathered in as long as they microchip their snake, pay a $100 registration fee per year and keep it in very secure conditions. Commercial breeders are also under strict regulations by the state and are not allowed to sell their snakes to anyone in Florida.

Biologists at Florida Fish and Wildlife are working hard to monitor all snake populations and to keep them from traveling further north in the state. As Hardin explains, “The Everglades is a National Park which means that it is legally controlled by 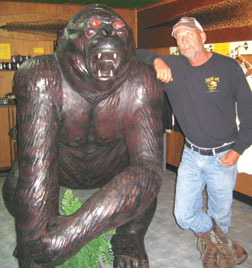 David Shealy poses with a gorilla at The Skunk Ape Research Center.

the federal government, not the FWC.” This makes controlling the population that much more difficult. But there is always hope. “There are not a lot of biologists out there, but there are a lot of people. We ask that everyone keep their eyes peeled and report sightings of large snakes. This gives us a head start.”

If you see a constrictor snake, shoot it, run it over, leave it alone; it’s your choice. But you should definitely call 1-888-IVEGOT1 and report what you saw and where. This helps to identify constrictor populations. Hardin remembers when the call came in reporting Shealy’s find in Big Cypress. “At first we believed it to be an extremely large Burmese, but after closer examination we realized it was actually a reticulated python.” Proper identification is important as all sightings are mapped and monitored, giving biologists a better idea of the constrictor snake population.

While the freeze in January of 2010 proved to eliminate many large snakes, it is clear that there are still many more present and thriving. Always use extreme caution if you do come across one, and if you have an exotic pet you can no longer care for, look for Pet Amnesty Days in the area where you can drop your pet off and it will be placed in a new, secure home.

Still a doubter of the constrictor population in the Everglades? Visit Shealy at the Skunk Ape Research Center on US-41 in Ochopee and see for yourself the massive snake that symbolizes one massive problem.