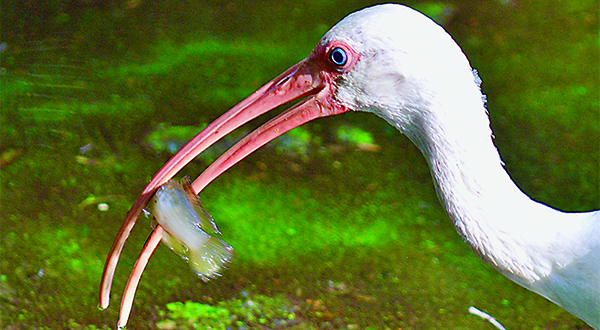 Photos by Bob McConville | A wood stork, great egret and an ibis all caught breakfast within 10 minutes of each other at Big Cypress Bend. Stepping Stone Ecotours conducts walking tours of this area through April.

Big Cypress & Manatee Presentation
Join Bob on March 22nd at 7 PM at the Marco Island Historical Society, Rose History Auditorium as he presents an update of photos taken in Big Cypress. His special guest is Master Naturalist Nancy Anderson who will speak about our area manatees.

“Have you ever been to the Everglades?” is a frequent question that I ask many visitors to the Marco Island area. More often than not I receive an answer something like, “I would like to visit them but I don’t want to drive all the way to Miami.” For those of you with that mindset, let me tell you that the western Everglades are just 30 minutes away from here!

This unique system begins just south of Orlando with the Kissimmee River and flows into Lake Okeechobee and continues for more than 100 miles all the way to Florida Bay. It is as varied as much as it is vast, containing many ecosystems that are interdependent upon one another, from marine environments, mangrove forests, tropical hardwood hammocks, pine rocklands, sawgrass marshes, cypress swamps and more.

Closest to home (Marco Island), and just a short drive down US 41, is the western edge known as Big Cypress Preserve. This 720,000-acre wonderland was originally intended to be part of Everglades National Park in 1947, but some of the lands were not purchased from private owners and Big Cypress was released from the park system. However, it became the first National Preserve system in 1974. It is still an integral part of the Everglades ecosystem.

Just a few miles past Port of the Islands and in one of the most dense portions of Big Cypress Preserve you will find a boardwalk that will take you into the heart of the Fakahatchee Strand, which is the largest bald cypress/royal palm swamp in the world. The area is actually nicknamed the “Amazon of the North” because of the density and variety of plant and tree species. And where there is vegetation, there are “critters” that enjoy this habitat. Many animals eat plants and some of those creatures are food for other larger animals.

On a March 8th tour of the boardwalk several large gators were seen, as well as some hatchlings, now about 18 weeks old. Feeding along the way were birds such as great egrets, ibis, wood storks, green herons, and more. Hidden among the tree branches were a night heron and a barred owl. Red shouldered hawks could be heard in the distance. Teaching people about these animals and the plant life that they call home is always fun and interesting. You never know what you will find along the way.

Stepping Stone Ecotours conducts educational, informative, intimate guided tours of this boardwalk setting twice daily. You can reserve your opportunity by calling 239-293-0800. A maximum of eight guests are on each tour and a Certified Florida Naturalist will lead your way.

So…you don’t have to drive to Miami, you don’t need to catch a bus to the center of the state. Just a short drive down the road and you are there! Marco Island is the largest of the 10,000 Islands and those islands are part of the Everglades ecosystem. Take that extra step and learn all about this one-of-a-kind land of enchantment!

Many of the photos in Bob’s new book “Beyond The Mangrove Trees” were taken in the Big Cypress Preserve. This pictorial look at Florida wildlife contains more than 160 photos shot by the author and is available at Sunshine Booksellers, Rose Marina Ship’s Store, Marco Island Historical Society Gift Shop, Your Family Home, Office City and Rookery Bay.

Bob is the owner of Stepping Stone Ecotours and a naturalist for a local dolphin survey team. He is a member of the Florida Society for Ethical Ecotourism (SEE). Bob loves his wife very much!