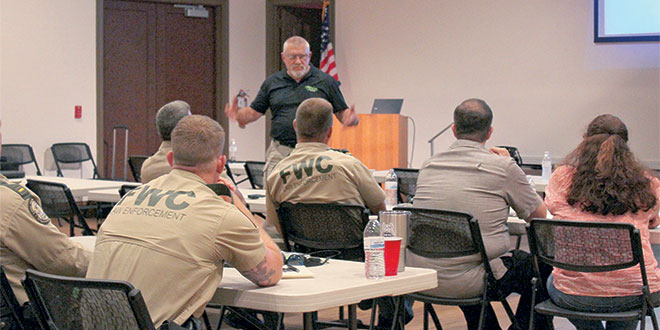 Photos by Samantha HustedDave Smith addressing the crowd of officers from various stations and organizations.

By Don Manley and  Samantha Husted

Maintaining a state of readiness isn’t only an on-the-job requirement for law enforcement personnel. It’s increasingly become necessary when the workday’s done, given the uptick in gun violence and potential dangers police and their families may face from those with sinister intentions.

That was a key element of a recent seminar attended by officers from several local police agencies that was conducted by well-known law enforcement trainers and authors Dave and Betsy Smith. The Tucson couple brought more than six decades of combined experience as police officers to bear in presenting a free, day-long program entitled “Beyond Off-Duty Survival: Developing a Winning Mindset for the Law Enforcement Life.”

Among the topics covered by the class were:

Off-duty threats, such as an ambush, that officers may face and how to respond safely and tactically

Effective ways to help loved ones understand the police officers job, how they think and why officers act the way they do, both on and off duty

The importance of forming action plans, including with loved ones, for scenarios where self defense may be required

“You’ve got to expect the unexpected because things happen,” said Betsy Smith.

The Smiths conduct their “Winning Mind” seminars and provide law enforcement consulting services across the country, as well as in Canada and Mexico, and in Europe and the Middle East.

“We’ve been teaching together since about 1999,” said Betsy Smith. “We travel 46 weeks a year talking to cops. We love law enforcement and we love their families.”

Dave Smith was an officer in his

Betsy retired in 2009 as a 29-year veteran of the Naperville, IL Police Department. Beginning her career as a police dispatcher at age 17, Betsy became a police officer four years later and has held positions in patrol, investigations, narcotics, juvenile, hostage negotiation, crime prevention and field training

The seminar was held at the Marco Island Historical Museum’s Rose Auditorium. In attendance were personnel from the Marco Island, Naples and Miccosukee police departments, along with officers from the Collier County Sheriff’s Office and the Florida Fish and Wildlife Conservation Commission’s Division of Law Enforcement. The audience also included some of the officers’ wives and some retired law enforcement professionals.

Whether on-duty or off, police officers can face a multitude of dangers from the criminally inclined, dangers that have escalated over the last couple decades, said the Smiths.

“There’s never been a time in my lifetime and probably yours that it’s been this bad,” said Dave Smith.

He and his wife cited the advent of the Internet and social media as an example of a new source of potential danger.  Today, the addresses of law enforcement officers and pictures of their homes can be found online and death threats have been communicated via Facebook, they said.

not, without an apparent reason.

They also said there are domestic groups that advocate harming police officers and their families, not to mention international terrorist organizations, such as ISIS and Al Qaeda, which share that goal.

“There is a war on cops out there, so we have to understand that and we have to be prepared,” said Betsy Smith.

Even something as seemingly innocuous as wearing a t-shirt emblazoned with the insignia of a police agency or taking a police car home could make an officer and their family a target, they said.

Besides the obvious dangers of police work, the duo also discussed the less talked about issues plaguing officers today. These issues include mental health, posttraumatic stress and administrative tensions.

Officers are often met with intense or violent situations. For many the stress of the job can alter their worldview, making them extra watchful or fearful of others.

“It wears on us and we can become hyper vigilant,” said Betsy Smith.

Betsy and Dave believe that in order to combat these issues it’s important for officers to maintain friendships with people outside of the profession.

“Support and comradery is the number one antidote,” said Dave Smith.

Officers should also be wary of taking the job home with them as this can be alienating and add unwanted stress onto relationships.

Finally, being aware of one’s surroundings is important, at all times, for officers and is something that is also wise for family members, said Dave Smith. Examples of this situational awareness would be sitting with your back facing the door in public places and taking note of exits.