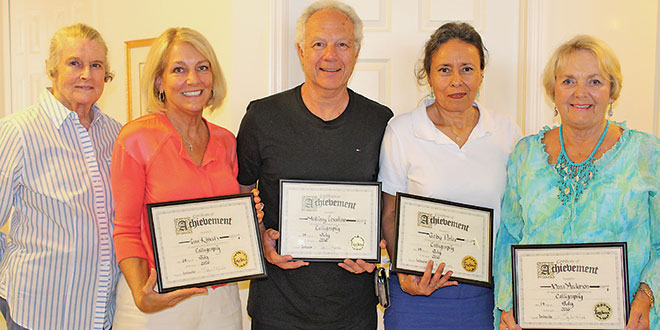 While some may consider it a dying art form, it seems that calligraphy has found its home on Marco Island. All thanks to artist Betty Kimble.

Each year for the past 12 years that she’s lived on Marco, Betty has held a two-week calligraphy workshop in her condo. Space is limited and only the most serious of students need apply. This year, due to popular demand, Betty held two separate classes. The first round of students consisted of: Gaby Porter, Gina Roberts, Mona Anderson and Anthony Cosentino.

“They all have their own style. I try to teach them the way I 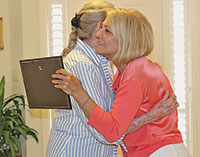 print to get them going. If they want to add to it or change it in any way, they can,” said Betty Kimble.

Betty, who just celebrated her 92nd birthday back in July, can usually be found at Keep In Touch where she sells her customizable greeting cards. For the past 70 years she has studied the art of calligraphy and is considered a master of the craft.

Each of the students brought with them their own unique reasons for wanting to learn calligraphy. Mona Anderson for instance, a grandmother, wanted to 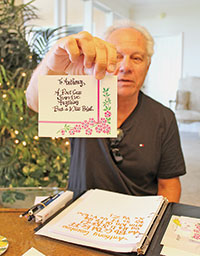 learn so that she could write personalized cards to her grandchildren, and maybe even teach them if they were interested. Anthony Cosentino, a creative writer, wanted his poetry to look as good as it read. And for Gaby Porter, calligraphy simply seemed like a good form of therapy and stress reduction.

During the two-week class the students became close. Together they would sit at the round table and talk as they practiced their writing. Anthony even wrote a poem for each member using calligraphy.

“We became a pretty close 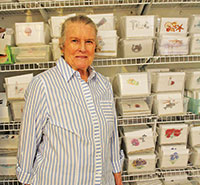 Betty Kimble, in front of her closet filled with her cards. Photos by Samantha Husted

knit group in a hurry, which is rather unusual,” said Mona Anderson. “But I think the positive energy that Betty brought to the table was just contagious.”

They started with the basics, the alphabet. After they had become familiar with letters they moved on to words and spacing. Then they practiced addressing an envelope, which is more difficult than it sounds. They also learned how to write numbers.

“Each time they walk in they do not know what to expect,” said Betty Kimble.