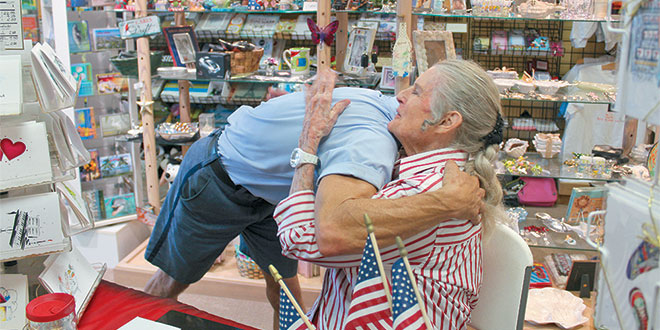 Betty Kimble was 15-years-old when World War II began in 1939, 31-years-old when Rosa Parks famously refused to give up her seat on a Montgomery bus in 1955, and 45-years-old when Neil Armstrong and Buzz Aldrin took their first steps on the moon in 1969. She has lived through the Great Depression, the Hindenburg disaster and the Vietnam War. She has seen 15 different presidents during her lifetime. At 92-years-old Betty Kimble has been witness to some of the most iconic events in world history.

Imagine the change and evolution you would see over 92 years—the technology, the social issues, and the fashion. With our society on a fast track to modernization, and the technological boom that’s happened in the last decade alone, it’s hard to imagine someone old enough to have lived through the invention of the microwave oven. But at 92 Betty has done just that.

On July 2nd the Marco Island resident celebrated her 92nd birthday at Keep In Touch, where she has sold her customizable notecards for the past 12 years. Betty is a self-taught artist who has been drawing for as long as she can remember. “I really started when I could first pick up a pen,” said Betty. “I just wanted to draw everything! By the time I was a teenager there was nothing I couldn’t draw. I’ve never stopped.”

Betty first began making cards for friends and family as a hobby. But soon,

Betty sits surrounded by her hand drawn cards with friends and Keep In Touch staff. Photos by Samantha Husted

Betty made it abundantly clear that she is a cartoonist; she does not do caricatures. “I never, ever draw caricature,” said Betty. “You make fun of a big nose, a pimple or a wart, wrinkles, glasses. I don’t draw that way.” Her cartoons are whimsical and happy, and drawn with good intentions. She has cards for nearly any occasion and is always making more. It seems that ideas strike her at any moment and off she goes to draw. During the season she can be found at Keep In Touch about three times a week and is willing to customize cards with her calligraphy skills, free of charge. And if you can’t find what you’re looking for, which seems unlikely as she has hundreds of cards, she’d be more than happy to draw something up for you.

On her key to longevity, Betty says she was never a coffee drinker and she “never had a cigarette” in her fingers. She considers her art to be another reason for her good health as it gives her purpose. “I’m fortunate. It’s therapy. All I have to do is start drawing and I forget what it was. It’s better than medicine or a cup of coffee or alcohol,” said Betty.