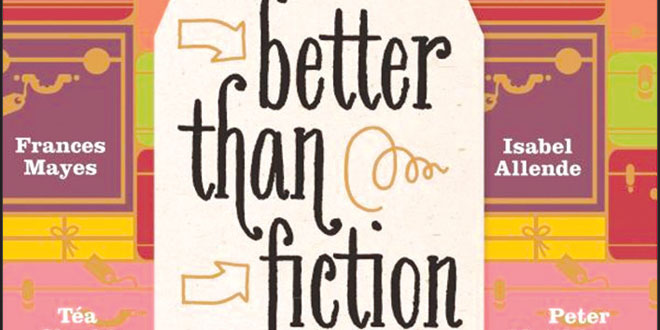 I usually find collections of short stories a bore. If there are ten stories, only four are truly interesting and well-written. I was drawn to this book because I was intrigued by the title, “better than fiction,” which could be my mantra, and because “travel” is in the title (Ready – where are we going? is my other mantra). I had no inkling I would be writing about it in Book Remarks, but it was an unexpected delight and worth sharing.

An editor and book reviewer for National Geographic Traveler, Don George has compiled this anthology which lives up to its title. Thirty-two accomplished authors have shared vignettes of their personal globe trotting.

Some will make you chuckle, like Kurt Andersen’s “Going South,” recounting his first without-his-parents vacation in 1972 with five other guys in a converted yellow school bus. Hearing that “hippie types” were not allowed to cross the Mexican border, the six hirsute guys stopped in Laredo, brought Brylcreem to slick down their longish hair, shaved their facial hair, bought nerdy shirts, and sailed across the border unchallenged.  But his description of the hospitality and improbable soccer match they experienced in a barrio in Mexico City will make your heart smile.

Joyce Carol Oates submitted, “A Visit To San Quentin.” If you’re familiar with this author, you know she can heighten your senses with her descriptive language. She delivers in this retelling of a tour of the prison which includes a visit to the robin’s egg blue gas chamber (no longer used – deemed cruel and unusual). Her observations about the buildings, guards, prisoners and other members of the tour, especially 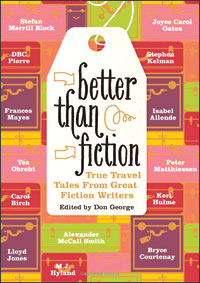 the younger females, are keen and bring the reader into the experience, conveying the condescension of the guards, the dankness of the gas chamber, repression of “the yard” and restrictiveness of the cells.

Others write about returns to childhood homelands. In “Among Saudi Sands,” Keija Parssinen recounts her trip to Saudi Arabia after a 15-year absence. For three weeks, she stayed with various friends who ranged from a very conservative gender-segregated-even-in-the-home family to a very westernized family that watched American television shows together.  Everything had changed, of course. There were now shopping malls, gourmet restaurants, barricades around official buildings and people sharing memories of bombings.

Most who wrote about “going back home” had similar revelations and concluded much as Parssinen did: “Since my trip home, I don’t cling as ardently to my memories, don’t ache to reclaim the vanished land. I understand that while our homelands shape our story, they cannot be possessed. Ever forward we keep moving – people and countries, the world over.”

I very much enjoyed the few hours I spent reading this book. I toured the world without leaving my condo. I had planned to read a story here and there, to break up the long intense biography I am currently reading. Instead, I read “better than fiction” in two sittings. Great writing, intriguing stories – and with 32 to choose from, you can skip any that don’t grab you and still get a worthwhile return on the investment of your time.

Maggie Gust is a life-long avid reader whose career path has included working as a teacher and in various positions in the health care field. A native of Illinois, she has lived in Florida since 1993 and presently works from her home here on Marco Island. e-mail: winetaster13@gmail.com