Best. State. Ever. A Florida Man Defends His Homeland 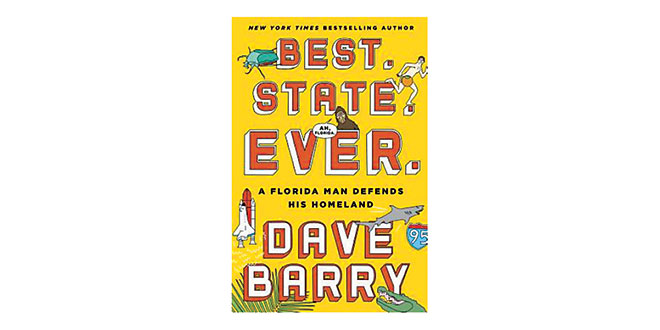 I have been a fan of Dave Barry’s humor for most of the 25 years that he has been writing columns, so I was anticipating a great read. He starts out with a strong first chapter, in which he takes on the State of Illinois and their penchant for electing governors who end up in prison. This was in response to a member of the media in Illinois who called Barry wanting to know what is wrong with people in Florida. Dave says he gets these calls about the mental health of Florida every few months and he traces it back to the 2000 election. I think all of us living here at that time received at least one phone call or email from family or friends wondering the same thing, “What’s going on down there?”

Barry on the day after election day November 2000: “Meanwhile, the morning skies over the state were darkened by vast fleets of transport planes swooping in from Washington, D.C., opening their doors and dropping tens of thousands of election lawyers. Some landed in the Everglades and were consumed by Burmese pythons. But, tragically, many survived, and, without taking time to remove their parachutes, they commenced filing lawsuits.” Thus was born the nation’s conviction that Florida is full of stupid people. Dave offers a scientific explanation for this proliferation of stupid people living in Florida. Basically, it boils down to the fact that they move here from the other states that roll their eyes when some stupidity in Florida hits the media. “Those of us who live here have to contend with not just our native-born stupid but your stupid, too.” His exposition of the scientific explanation is one of the funniest passages in the book.

The stupidity is enhanced by the weirdness of things that occur in Florida, such as a shark being the only fatality in a traffic accident on I-95 in Volusia County. Four sharks were being transported from the Keys to Coney Island in New York and one of them was ejected from the tractor trailer during the accident, causing its demise. Fortunately, the shark did not strike another vehicle.

Barry admits we are “The Joke State” in the eyes of the rest of the nation, but what really annoys him are the New Yorkers who transplanted here and cannot stop their incessant comparisons. The pizza, the bagels, the sports teams, the newspapers, the theater, and even the water are so much better in New York. Being from the NYC area himself, Barry points out when he goes for a visit, he never mentions that Manhattan smells like garbage during warm weather. “Nor do I observe that when you eat in popular restaurants – after waiting an hour or more to be seated, of course – the tables are jammed so close together that adjoining diners sometimes accidentally put their food into your mouth.”

Yet, despite all this negativity directed at Florida, our population continues to grow. The reasons for this, in Dave’s view: The weather is warm; taxes are low; the women are amazing; it’s not boring; and Florida has Disney World. “It means that wherever you live in Florida, you have easy access to the number one family theme resort in the world. My family can get into our car in Miami and, in just three and a half hours, we can be in the Magic Kingdom, standing in a four-hour line to get into Space Mountain. You cannot put a price tag on a family theme experience like that.”

As I mentioned earlier, I found the first chapter to be the most hilarious. It is followed by a brief history of the state, a visit with the proprietor of the Skunk Ape Research Headquarters in Ochopee (why, Dave, why?), Weeki Wachee and Spongeorama (where he discovers a Mold-A-Matic machine), an overnight stay in Cassadaga the week before Halloween. Here he has a reading by a medium and has his dog’s aura read. Another chapter deals with his excursion to The Villages in search of evidence of the “hot times” said to occur there among the seniors. There is an unremarkable visit to Gatorland. A trip to a gun range in Miami with his wife’s cousin seems to have been his favorite outing involved in the writing of this book. Nothing like the smell of spent shells in the afternoon to put a man in touch with his inner Rambo. In “LIV,” Barry details his date with his wife at this exclusive night club in Miami, where people wait for hours to be “chosen” for admittance. The Barrys were invited guests, so did not have to wait for bouncer approval to enter. Finally, a trip to Key West with a friend for a guys’ getaway closes the book.

Personally, I found the book uneven. A couple of the chapters were vintage Barry, particularly the first chapter. There were photographs for each chapter, which are quite nice. He cleverly used images of the Mold-A-Matic to rate his experience at the end of each chapter. My impression is that he phoned in most of this book. I wonder why nothing north of approximately the Ocala area was included in the book. All the locations he chose were within an easy day’s travel from his home in the Miami area. No Redneck Riviera? Why not a visit to Panama City during Spring Break? A Gator home game? A Seminoles tailgate party? The Blue Angels?

This book is available in audio, hardcover and e-book formats at just about every book vendor. Get your request in at the library – currently there are about 70 holds on queue. My rating is 3 Mold-A-Matics out of a possible 5, due mainly to an outstanding first chapter.