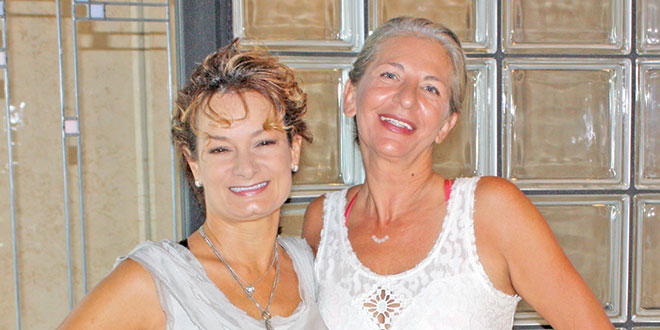 Theresa Chambers’ passion is unmistakable when she is discussing her business.

“I enjoy making people happy through what I can do for them,” said the owner of Bella Florals by Theresa. “That’s how I work. That’s why I do what I do. It really is true. I don’t just say it.”

Chambers opened the newest addition to Marco’s roster of florists in April, operating out of home thus far. But the business has proven so successful that Bella Florals will soon occupy its own shop, located at 9 Front Street. The grand opening is set for November 12, and the day-long event will be highlighted by a host of activities, a wine toast from 5 to 7 PM and of course, uniquely designed arrangements of flowers, flowers, flowers.

The business’ specialty is customized floral arrangements for weddings and events, an approach that is heavily influenced by Chambers’ fellow designer, assistant and best friend, Bosnia-born Bjenana Ninkovic. 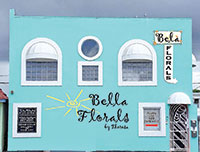 consultations are held, by appointment, with wedding and event customers to assess their desires, and Chambers and Ninkovic take it from there.

“I look at the environment and listen to what they want for their event and provide them with flowers that are within their budget,” said Chambers.

They also provide customized arrangements, plants and gift baskets for birthdays, anniversaries, parties and for those “just because” occasions.

“If somebody is ordering flowers, we really listen to what they want and what they want to do,” said Chambers. “We’ve really been successful with that and with offering different designs. We really get involved with every order and every customer. Each order is unique and one-of-a-kind and that’s what we take pride in.”

People who love to brighten their surroundings with fresh flowers can have Bella Florals deliver them on a regular basis. There is also a maintenance service that has Chambers stopping by the home to freshen up an arrangement to maximize its freshness.

Chambers moved to Marco in April of 2015, from Wilmington, N.C., where she opened 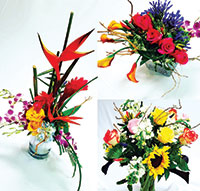 A sampling of the displays that can be created by Bella Florals.

her first Bella Florals in 2007. Prior to that, she worked for six years as head designer for another Wilmington florist, which is where she and Ninkovich met.

“She’s one of the best designers I’ve ever met in my life,” said Chambers.

Before entering her current profession, Chambers was a personal trainer for 12 years. She shifted careers after desiring a change and finding that she had a talent for floral design.

She is closing her Wilmington location, although she will still utilize flowers that she grows on a one-acre parcel there.

Future plans include adding an art studio to the shop where floral design classes can be taught and for weekday community activities, such as public viewings of Chambers and Ninkovich creating arrangements.

“I believe that Marco Island residents and visitors, they really deserve the best,” said Chambers. “I have the patience and the love to provide everybody who walks in my door with exactly what they’re looking for. When people see what we do, they’re going to get that and they’re really going to enjoy it.”

For more information about Bella Florals, visit bellafloralstc.com or call 239-316-2373.