Being Mortal: Medicine and What Matters In The End 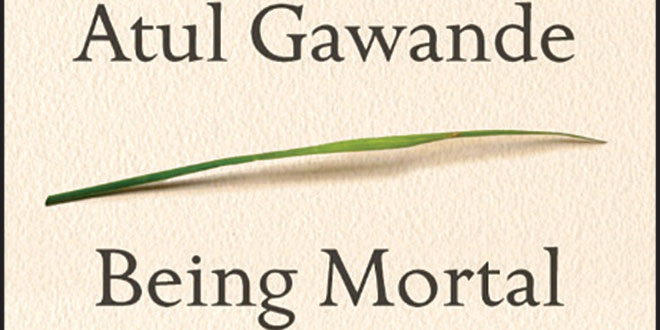 “If end-of-life discussions were an experimental drug, the FDA would approve it.” — “Being Mortal.”

The author is a general surgeon practicing in the Boston area, who has written previous books about medical practice (“Better,” “Complications,” “The Checklist Manifesto”). His name may be familiar to you. In “Being Mortal,” he is opening a conversation about how we deal with not just end-of-life issues but also debility and decline in our well-being.

“‘Being Mortal’ is about the struggle to cope with the constraints of our biology, with the limits set by genes and cells and flesh and bone. Medical science has given us remarkable power to push against these limits…I have seen the damage we in medicine do when we fail to acknowledge that such power is finite and always will be.”

This is pretty much the kernel of this book. Dr. Atul Gawande’s writing is informal, easy to read, much like listening to your nephew the doctor explain things to you.

I always thought America was behind the rest of the world in how we isolate our elderly and those in debilitated condition, forcing them from their own places into nursing homes. Actually, I was taught that in my sociology classes. It turns out the rest of the world does not do much better. In societies where multigenerational households still exist, they come with their own tensions and complications. Elders around the globe still prefer autonomy and want to maintain their independence as long as possible. This usually works until they start to fall, to forget or to have a medical event of some kind. Then decisions need to be made about interventions.

Choices usually involve hiring help to come into the home, moving the elder or debilitated relative to another family member’s home, assisted living or a nursing home. Too often, the patient is left out of the conversation, and the “care” devolves into the family and the medical providers deciding what to do. This is why Dr. Gawande exhorts the importance of advanced directives and having “hard conversations” with your loved ones ahead of time.

Knowing what the patient wants is essential for the family and friends, as well as the care providers. Family usually wants everything possible done. If X does not work, then try Y, etc. In “Being Mortal,” the author notes that an advanced directive especially when coupled with the “hard conversation” will not only ensure the patient’s autonomy, but also relieves the family of having to decide whether to prolong the patient’s agony with another procedure or treatment.

Much of the book details the experiences of several patients including the author’s father, a urologist, and his treatment for a spinal tumor that was misdiagnosed for a year, as well as a couple of patients. He weaves back and forth, telling their stories, as well as that of the 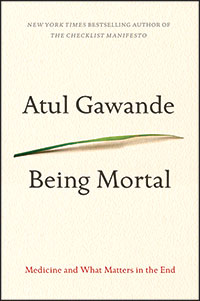 founding and growth of assisted living in the United States, hospice and a newer movement called independent living. Independent living involves people staying in their own places and getting what help they need. It works in a manner similar to a co-op — some people just need a handyman to come in and change the light bulbs, fix a broken lock, etc., while others need help with bathing, dressing and other basic activities of daily living.

There are innovations occurring all over the country as more and more older adults and people with debilitating conditions are determined to keep their autonomy and dignity absolutely as long as possible. He gives an example of one doctor who turned a nursing home on its head. Somehow he got approval from the state government to bring in dogs, cats and parakeets, planted a vegetable garden in the front lawn, brought in kids from a nearby school as well as the employees’ kids to liven up the place.

“Being Mortal” addresses a lot of crucial issues. Dr. Gawande explains how he had to relearn how to talk to sick patients. Instead of just offering them information and options, he needed to learn how to let the patient know that she, the patient, was in charge. A palliative care nurse gave him these new communication skills.

The author and his family generously share their story of his father’s illness and death. In chapter 7, “Hard Conversations,” he includes the account of the discussion he, his father and his mother — all three physicians — had with his father’s oncologist as well as a later discussion with the home hospice nurse. The elder Dr. Gawande knew exactly what he wanted to do and laid it all out to the nurse practitioner, astounding both his wife and his son. He exercised his autonomy and also gave his family clarity about how to handle the end, relieving them of the responsibility. The wife and son thought they knew what he wanted, but without that conversation, they would never have realized they had it all wrong.

Although the topic is serious, this book is not the least bit morbid. It addresses issues we all have either already dealt with or will have to deal with in the future. He indicates we are in a transitional phase in this society regarding this issue, are making strides forward, but we still have a long way to go. First, we have to talk about it.

Available in the usual book markets; not yet available at Collier County Public Library.