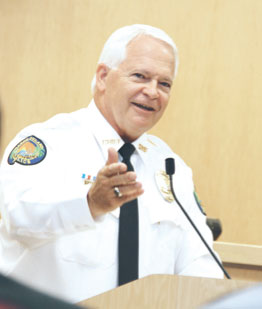 Marco Island’s Police Chief Don Hunter is famous for a long stint as Collier County Sheriff. Like many of the officers now reporting to him, he came out of retirement to take the job on Marco. Unlike many of them, his backstory doesn’t include the traditional ‘boots on patrol’ career path. This “accidental sheriff” (his words, not ours) took time out from assessing what it means to have just grabbed the tiger of Marco politics by the tail to share how his early view of our justice system from 32,000 feet can help build the island’s unique community police force.

Hunter, who now exhibits the laconic stiff upper lip of many a law enforcement veteran says, “I was 37 or so, and I didn’t really feel ready to be an elected official,” upon his election to sheriff in 1988. But in a dog eat dog political maneuver, another CCSO deputy had sworn to dispatch Hunter if the deputy himself won. Instead it was Hunter who came out on top, and stayed on for about 30 years.

He began his career in the now-defunct Law Enforcement Assistance Administration, an umbrella agency that worked with the Department of Justice to help, not just Florida police departments, but judges and corrections facilities with grant money, equipment, staffing and strategic planning. “You learn how the whole system is interlocked; how it’s supposed to work together, but also, how many times it can work against itself.”

This top-down view of the justice system continues to serve Hunter, who has a strong academic bent and seems most drawn to the intricacies of growing a law enforcement agency. Before becoming sheriff, he was a principal planner at CCSO during his eight and a half years as deputy chief of special operations. During training at FBI headquarters, he was, and still is, part of a working group on ‘futures,’ the study of how law enforcement can lead, instead of react, to changes in crime. He serves on the Commission on Accreditation for Law Enforcement Agencies, an international organization that shares best practices, and says that getting the Marco PD accredited with the commission is something he intends to explore.

It was during his 1994 FBI training that Hunter put to rest a haunting case of a woman found in her locked car with her neck severed. It seemed an incomprehensible possibility that this woman could willfully inflict enough self-violence to nearly decapitate herself, despite the evidence pointing to suicide. Hunter brought her case to his death investigations class and learned that the circumstance was, sadly, more run of the mill from the agency’s perspective.

“It was the test marks on the side of her neck. Apparently, it’s not as uncommon as you’d think. She tested the blade first… but I was never comfortable with [the ruling] until I brought the case to the FBI.”

So, like many of the Marco police veterans, Hunter has seen everything from the horribly macabre to the vividly absurd, and has respect for the experience his officers have accumulated. “You’re always looking at the underbelly. These guys are survivors because they’re al- ways thinking of the next scenario, how do you mitigate the situation?”

Hunter, like his force, has respect for Marco’s community policing philosophy. And his first encounter with it in a dodgy neighborhood while sheriff, was amusingly familiar to anyone with an inconsiderate neighbor. He and a deputy picked a door, knocked, and prepared to hear about the drug dealers, prostitution or the neighborhood’s other serious problems, or possibly just get shot at. “Instead, a woman opened the door and said, ‘I’m so glad you’re here! There’s a rooster that lives next door and it won’t stop crowing….’”

Hunter says community policing works because it puts police in touch with the world citizens live in. “There’s hardly any problem that can’t be solved, beyond jobs and the economy, and those are above my pay grade.”