Before I Forget: Love, Hope, Help, and Acceptance 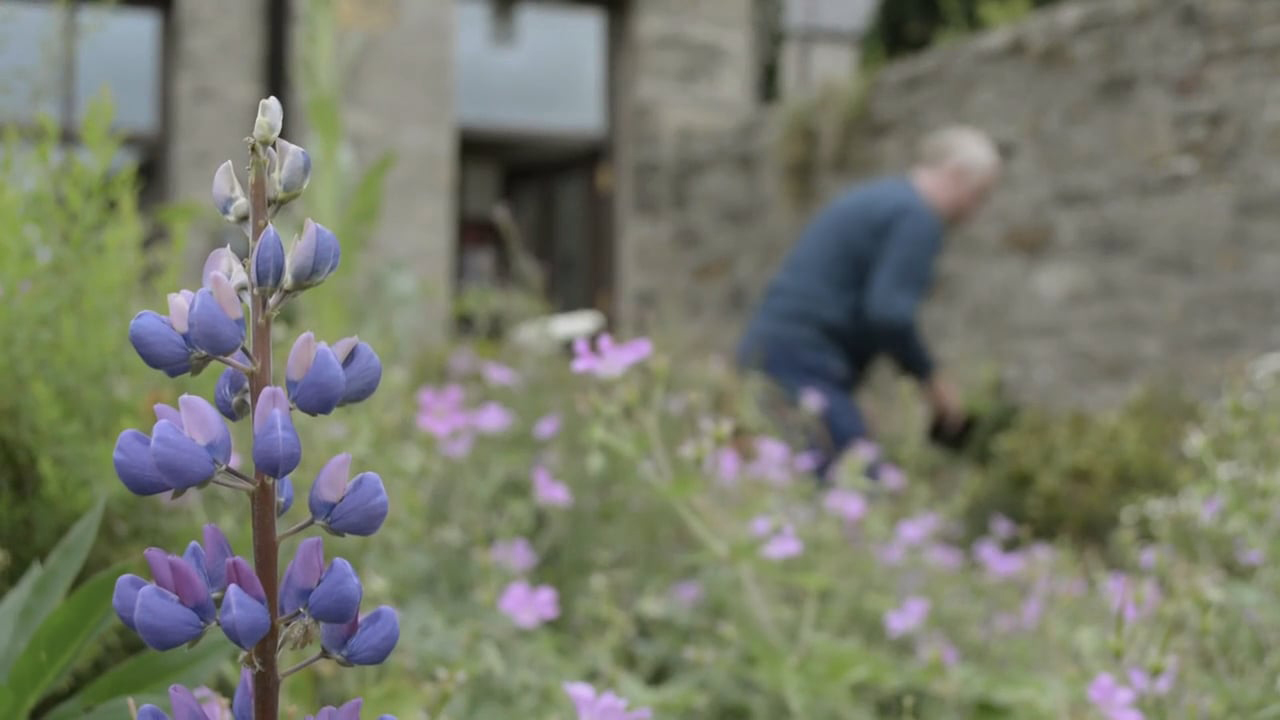 Have you ever read a really interesting book on Alzheimer’s disease and caregiving that is also a couple’s love story? I’ve just finished one, “Before I Forget,” by B. Smith and Dan Gasby, a 2016 publication. They tell us what frustrates them, why they get angry and where they find joy. It feels as though they’re communicating with the reader on almost a day-by-day basis with nothing held back.

Before Barbara, known as B., is diagnosed with Alzheimer’s, her husband, Dan, struggles to understand what is happening to her. Although they love each other, B.’s memory lapses begin causing problems and Dan reacts with anger. It happens often enough and long enough that Dan believes the marriage ties are fraying.

B. Smith is known for her fashion modeling, her cookbooks, B. Smith restaurants, and her television show and magazine. Her husband, Dan Gasby, is a television media sales executive and a television producer for both network and syndicated programs.

When B. is diagnosed with Alzheimer’s, they decide to share their story. The book is part memoir and part caregiver’s guide that takes us through the necessary life adjustments after her diagnosis, his state of denial, an eye-opening, detailed testing of B.’s capabilities, and a harrowing story of her wandering. While their story gives the highs and lows of their experience, it also presents the case for more funding for research, the need for more participants in research trials, and for more comprehensive testing of patients with professional guidance given to help caregivers.

The book is divided into ten parts or sections including Little Signs of Difference, the New Normal, Walking in Her Shoes, and the Road Ahead with short chapters within each part telling their location and the date. Lessons Learned are given at the end of each section and begin with an italicized description of B.’s thoughts and emotions.

For example in the beginning: “I know where I’m going. I’m still myself. I just can’t remember things as well as I once did. So on short trips I work hard not to be confused. I’ll say to myself, “What are we going to do? How long are we staying?’ It’s like I’m talking to my other self—the self I used to be. She tells me, ‘This is what we need to buy—not that.’”

Or, “Here at the house I’m fine. Sometimes it takes me a little longer to get dressed than it used to; sometimes I forget what I put on the stove. But that’s just normal, right? Actually, I know it’s not normal. I know I have Alzheimer’s. I know I have to work harder than before to keep things straight and do what Dan says. So I do! It doesn’t always work out, though, and Dan gets frustrated with me. I get frustrated with him, too. We’re both very strong people, in our own different ways—I’m quieter, he’s not and both of us speak our minds.”

Dan writes about B.’s early changes. “Along with the memory lapses, I noticed the emotional ups and downs. When I spoke with her, B. would seem preoccupied, unresponsive. Finally I’d say, ‘What’s wrong with you?’ But that only made her withdraw more. If I kept insisting she’d say what was really on her mind, she’d burst out with, ‘I hate you! I love you, but I hate you.’”

“B. was the kindest person I’d ever known—kinder even than my own mother. Yet now she might snap at small things, leaving me hurt and confused. And to tell the truth, I would snap back. It wears on you. Suddenly I was in this bizarre world where B. might be nice and loving one minute, then explode the next. We had been together more than twenty years. We’d never experienced explosions like that.”

It was a guest spot on the Today show when Dan and others saw B. needed help. She’d been on the show many times before and was always at ease. She was to demonstrate recipes for a Labor Day picnic. That morning she started out talking with the co-hosts as usual. Then, “One of them asked her a question. Instead of answering she just kind of went blank…B. was a pro. She knew the first rule of live television, fill the space. Finally the co-hosts started talking with each other…That was the day both of us had to admit that something was terribly wrong and that we would have to seek medical help. In retrospect it was the end of B.’s life as a healthy, happy woman—wife, stepmother, entrepreneur—and the start of a new life, as a person with Alzheimer’s.”

“It was, of course, the end of one life and the start of another for me, too, not just as B.’s partner in marriage and business, but in a role I had never expected to play: her full-time caregiver. Neither of us had any idea how challenging it would be.”

B. Smith was diagnosed with Alzheimer’s in 2013 at 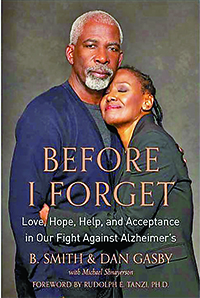 64. As Dan explained it, B. has lived in the public eye for a long time from her first days as a black fashion model…“For all the challenges we face with Alzheimer’s…B. would live this part of her life in the public eye too for all Americans struggling with Alzheimer’s, but especially for women, even more so women of color.” As Dan says, “too few of us have volunteered for research and clinical trials, so scientists have been kept from figuring out why we get Alzheimer’s more often than whites.”

One of B’s happiest times is taking Bishop, their Italian mastiff for a walk on the beach. He belonged to their twenty-seven-year-old daughter, Dana, until she moved in to help and gave him to her mother. According to Dan, “Bishop is smart, we really communicate. More important, I know that B. will be safe whenever he’s with her. I’m not sure B. can sense danger anymore—not from someone who might at first be friendly, but Bishop can.”

They live in Sag Harbor Hills on Long Island and from their house Dan can watch B. taking Bishop to the beach toward town throwing a tennis ball into the surf again and again, and laughing as Bishop swims out to retrieve it. “From our front deck, I watch her playing with him, as if nothing was wrong and this day was a day like all the others we’ve had. Then slowly, steadily, she diminishes, until she’s a distant dot.”

B.’s initial diagnosis was at Mt. Sinai School of Medicine. But after meeting Dr. Howard Fillit, and speaking at an Alzheimer’s Drug Discovery Foundation luncheon, B. was very thoroughly tested by him during an hour-long appointment for various aspects of dementia with many specifics given in the book. After the testing, Dr. Fillit gave the results to B. and daughter Dana, (Dan was at home trying to clear out some of the clothes B. was hoarding): that B. was no longer in the mild stage, that she suffered from a number of specific issues, such as agnosia or difficulty with processing sensory information, and apraxia, the loss of fine motor skills. Dr. Fillit was also adamant that B. had to accept a homecare worker, which she’d resisted. B. reluctantly agreed.

Dan writes, “And then the office visit ended, and the worst eighteen hours of our lives as a family began.” After this harrowing experience, Dan is no longer in denial about B.’s decline.

Interwoven throughout all the difficulties B.’s disease brings to their life, is the couple’s love for each other. “B. is different. Life is different. My love is different too…The love I feel for B. now is even deeper than the breathless excitement I felt when we first met…Love…becomes more about friendship and companionship than lust,” and finally, “Protect and provide…those are the watchwords for where we’re at now.”

Dan Gasby worked with Vanity Fair contributing editor, Michael Shnayerson on the book. The foreword is by Dr. Rudolph Tanzi, professor of neurology at Harvard Medical School and Director of Genetics and Aging Research at Massachusetts General Hospital whose lab produced Alzheimer’s cells in a Petrie dish.

While there is a lot to learn from the pages of “Before I Forget,” it is as the book jacket states, “at its heart, a love story, illuminating a love of family, life, and hope.” I’ll be returning my library copy to the Marco Library in a few days. It’s worth checking out.

If you’re interested in another book about a couple’s experience with Alzheimer’s, take a look at “Elegy for Iris” eloquently written by John Bayley. Both Iris Murdoch and Bayley are English writers of note. Other books you may want to explore are: the classic resource book, “The 36-Hour Day” by Nancy Mace and Dr. Peter Rabins, and “Dancing with Rose,” by Lauren Kessler, a daughter’s tale about working in an Alzheimer’s facility after her mother’s illness and death from dementia. In “Still Alice,” Dr. Lisa Genova tells us what it’s like to have Alzheimer’s disease. The movie, “Still Alice,” will be shown at the South Regional Library on Rt. 951, on Wednesday, February 15 at 2 PM.

For information about the national threat posed by Alzheimer’s disease, see the PBS documentary, “Every Minute Counts,” Wednesday, January 25 at 10 PM.