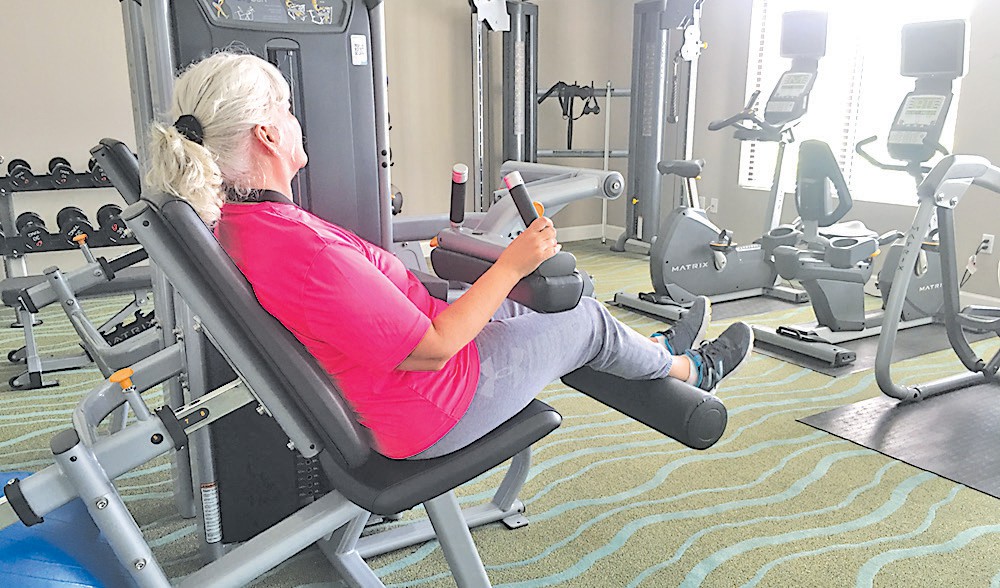 Kristina Hodgdon works out at the gym in the Artesia development. Submitted Photos

Kristina Woodman Hodgdon was leading a full life when the unexpected radically altered her circumstances on July 19, 2015.

Until that day, she was a wife and mother, employed fulltime by Marco Island’s utilities department who played tennis twice a week and had just completed an associate’s degree. She was also known for volunteering for an assortment of events, organizations and causes in the community. Her world was then turned upside down by a rare type of brain aneurysm that struck while she was in her Marco Island home, threatening her life and leaving her hospitalized for three months.

“I’d had this aneurysm for about 20 years and didn’t know it and then I got a blood clot and it burst,” said Hodgdon, known as Cricket to the many friends she acquired during 12 years on the island. “Only 5-to-7 percent of people who have my kind of stroke live. I really am lucky. I figure I’m still here for some reason.”

Cricket credits the prompt response and expertise of the city’s fire-rescue department personnel with being a key to her survival.

After being stricken, paramedics rushed her to Naples Community Hospital. Cricket was then airlifted to UF Health Shands Hospital in Gainesville, where she was immediately placed in the ICU. Within days, she’d undergone two operations, including a procedure to remove a blood clot on her brain, and she spent three weeks in a medically induced coma.

Her husband Jim, the city’s former parks and recreation superintendent, and their then 11-year-old son Lucas, were constants at her side during her hospital stay. Members of Marco’s Fire-Rescue Department held a fundraiser that August at the Marco Island Brewery to help the family with the travel costs.

“Everybody came out to help when I had my stroke and I really appreciate that,” she said. “That’s what community is about, looking out for each other.”

Cricket still has major hurdles to surmount, such as blindness in her left eye, but she has traveled a long way down the road to recovery and she’s determined to continue that progress.

“I’m doing really well,” she said recently. “It’s been two years (since the stroke) and I’ve been doing therapy the whole time. I feel a lot better and I have a new device (the L300 Foot Drop System) that I use to walk with. It has electrodes screwed into my nerves and it’s programmed for you and 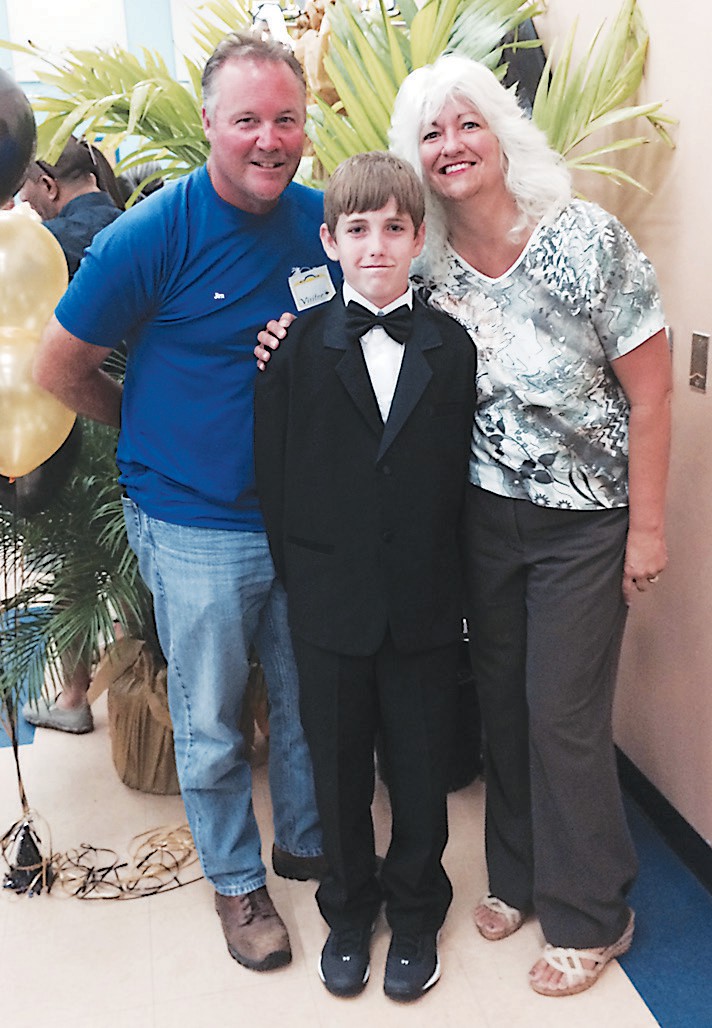 Jim and Kristina Hodgdon and their son Lucas.

it helps lift my foot to walk. I was falling quite a bit, but I’m doing much better with this.”

When not attending physical therapy sessions, where the focus is on helping her learn to walk without a cane, Cricket works out at the gym in the nearby Artesia development, located off U.S. 41. The Hodgdons moved there recently to put Jim closer to his current job of parks superintendent for the City of Naples.

Cricket isn’t able to drive yet, but an important milestone is within sight.

“I want to get myself independent and I’m almost at that point,” she said.

She’s been exercising her mind as well as her body, by taking online courses to pursue a master’s degree from Capella University. Cricket is also a volunteer for the Crisis Text Line, a national nonprofit that provides assistance to teens and adults in crisis. And she’s started a blog to help others in her situation, apositivelifeafterstroke.com.

“I want to have links to research, studies and positive psychology articles, anything that can help people think positively after a stroke,” said Cricket.

As with other health challenges, maintaining a positive mental outlook is all important after a stroke, she said.

“You have to realize that you’re not the same person,” said Cricket. “You have to create a new person. That’s how I deal with it. That’s my goal is to just keep going and if I can help people along the way, that’s even better. There are a lot of people who don’t feel good after a stroke and those are the people that I want to reach out to.”

Cricket returned to work with the city, on a part-time basis, last October, this time working in the growth management department overseeing business licensing. She worked for the city for almost 14 years.

“I missed working with the city because I’d get to see people,” she said. “It was like a family, I was there so long.”

And even though her family has moved off-island, Cricket still has strong ties to Marco, which was their home for 12 years after moving from their hometown of Portland, Maine. Her sisters, singer Jenny Woodman, and Kecia Cookson, still live on the island.

“I met a lot of people there and had a lot of fun there,” she said. “That’s why we didn’t move too far away. I think I still feel like I’m a Marco Islander because we’re so close.”