Beaten, Seared and Sauced On Becoming a Chef at the Culinary Institute of America 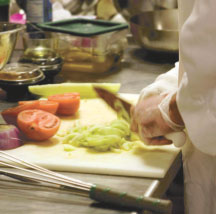 I doubt that I am the only one, man or woman, who loves to cook but is seldom able to produce anything to equal the gourmet delights I have been served in first class restaurants. You would think that with enough practice cooking meals for a family day after day you would eventually reach some level of acclaim, at least from that very family eating those lovingly prepared meals, but ‘taint necessarily so! You can spend all the time you want perusing cookbooks of all types and practicing what you read and still not reach that coveted goal of “Chef” versus “cook.” Those of you who have read Julie and Julia: My Year of Cooking Dangerously, a biographical book of a young girl, Julie, who decided to cook, in one year, every one of Julia Child’s 524 recipes in Mastering the Art of French Cooking, know she soon found that effort and intent do not always lead to excellence.

Jonathan Dixon decided on his 38th birthday, after years of various unsatisfying jobs, to enroll in the two year program of the Culinary Institute of America (CIA), one of the world’s premier cooking schools. He was one of the oldest students in the class with most of them coming straight out of high school.

One of the things Jonathan had going for him in writing this book is that he was a writer before he became a chef. We often find that an author has the best of intentions in telling his story but falls down on the job. This is not the case with Mr. Dixon. In this fascinating chronicle of his time at the school he quickly gives us an insider’s view of all that is required of a student preparing to become a gourmet cook.

This is not a journey for the faint of heart. Not only does the Institute have very explicit rules to follow, but its two year course is broken down into hundreds of essential skills involving all types of cooking from all over the world. You might imagine that each dish presented is practiced over and over until perfection is achieved but that is far from the 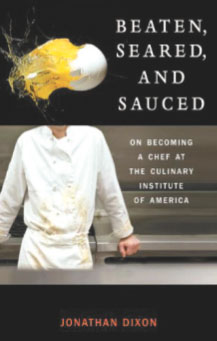 case. Almost always each recipe is prepared only one time. Skills are used over and over again only because many recipes call for the same skills learned earlier to be used again and again. A student must not only learn how to cook each dish but is expected to learn the recipe by heart and from that basic recipe be able to add and subtract ingredients to make other equally delicious dishes.

Often the instructors bear a strong resemblance to Chef Gordon Ramsay in the T.V. show Hell’s Kitchen. They keep an eagle eye on everything being done by the students and have no qualms at all about pointing out the error of his or her ways loudly, clearly, profanely and in an extremely embarrassing manner. The calm, gentle instructor is the exception, not the rule by any means. Each class is crammed with not only skills and recipes to be learned but also facts about the food, where it came from and how to break down and identify the ingredients by taste alone. The extensive wine course alone has an eight hundred page book which has to be pretty much memorized in its entirety.

Not only must a CIA student take the classes but also take an externship of 126 days in a CIA recognized and approved restaurant in New York City and, in addition, spend six weeks each in two of the school’s four on-campus restaurants, both cooking and serving in the dining room.

It would be an understatement to say that many of those starting the program do not make it to the end. After reading this book you will have a new appreciation for the chefs in the kitchen when you dine in a fine restaurant.

If you enjoy this book you might also like Endless Feasts, Sixty Years of Writing from Gourmet, edited by Ruth Reichl, Condee Nast Publications, Inc. 2002.

Diane Bostick has lived on Marco Island since 1987. She was the Founder and President of Ft. Myers chapter of the Association of Children with Learning Disabilities, President of Jr. Welfare League, Ft. Myers Chapter, and served on the board of Art League of Marco Island. She is an avid reader, fly fisherwoman, tennis player and crafter