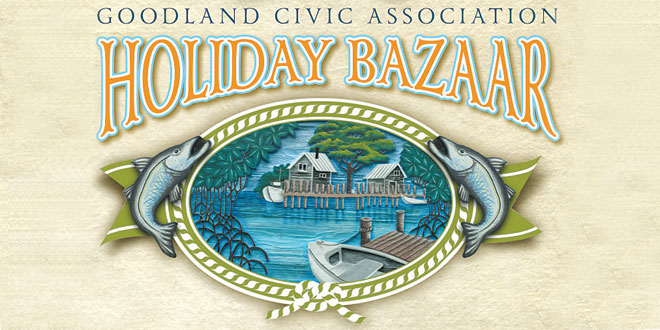 Tis the season! I’m not just talking about the holidays, either. It is officially November and traffic has officially increased throughout Southwest Florida. As snowbirds and vacationers stake their claim of paradise, paradise puts on shows to entertain them. Goodland, my little piece of paradise, is already getting into the season by way of the Goodland Civic Association Fourth Annual Holiday Bazaar.

This annual event has seen some major changes this year. First, we moved the date… This year, the Bazaar will fall on the weekend of November 16 and 17. It’s the perfect chance to find holiday gifts in the form of beautiful arts and crafts from nearly 60 vendors. Many artists are local, coming from Goodland and Marco Island, but many also come from as far as Sarasota to take part. If you’re looking for something original, you’ll be sure to find it here.

“Here” is the other major change regarding the event. The annual show has changed venues from the Goodland Boat Park to Margood Harbor Park, 321 Pear Tree Avenue. MarGood was given a makeover by Collier County Parks and Recreation over a year ago and has since been a great gathering spot for families and friend to have picnics and entertain their children. It has also been an excellent locale for art shows as proven by the successful Harbor Arts Festival held there last March.

What is a Staycation you ask? Well, it’s a word I made up after hearing my sister say it, basically combining stay and vacation into one. It’s all about having a great time in your own backyard. This raffle offers all one needs for a relaxing weekend away from the norm, but not away from where we live, work and play.

The package includes: a two-night, three-day stay at the Marco Island Marriott, a sunset boat tour with Dreamlander Tours, two tickets to the performance of your choice from the Marco Players and dinner for two at the Snook Inn. Raffle tickets will be sold at the Goodland Civic Association’s booth at the Marco Island Farmer’s Market as well. Tickets cost $5 for one ticket, $10 for three tickets and $20 for 10 tickets.

JRobert, musician extraordinaire, has put a fabulous musical line-up together for the event as well. Different bands will be featured each day, playing hour and a half sets to entertain the crowd. Seats will be available for those who want to sit and listen, and with this line-up, visitors will surely want to stick around. Although time slots are still being finalized, featured musicians will be Raiford Starke, JRobert & Martin, Gator Nate & The Gladezmen, Tom Porter, Terry Lee & The Bridge Trolls, Randy & Zia, Captn Jac, Merrill & Jim Allen and JoRey UFO.

Recognize a band you like? My apologies for not having the time they will play. To ensure you see your favorite, your best bet is to arrive at 11 AM on both days and leave at 4 PM. For those of you who are a little slow on the uptake, that means the time for the Bazaar is between 11 AM and 4 PM on both Saturday, November 16 and Sunday, November 17.

Please come. It’s going to be great! I should know. After all, I was a part of the committee that planned out the details for the event. Albeit a small part on my behalf, Connie Fullmer and Noreen Seegers each dedicated their entire summer to getting this grand affair together.

Once again, The Goodland Holiday Bazaar will take place on November 16 & 17, from 11 AM until 4 PM at MarGood Harbor Park, 321 Pear Tree Ave, Goodland.

Now that you’ve marked your calendar, don’t put the pen down just yet. Speaking of art shows, two more are in the works for the New Year as I type. The Goodland Arts Alliance will be holding a one-day GAA Arts & Crafts Fair on Sunday, January 26. Incidentally, this coincides with Stan’s Annual Mullet Festival. Since you’ll already be in town, swing by MarGood for some extra stimulation by way of art.

Next up… The Second Annual Harbor Arts Festival. The first year was such a success, the GAA has decided to do it again. The date: Sunday, March 9.

But first, check out the GCA Holiday Bazaar. You won’t be disappointed, and it will leave you thirsty for more… which is a good thing, since there’s definitely more.