Barry Cole’s model of the Ludendorff Bridge is part of the setting for movie scenes focused on the Battle of Remagen. SUBMITTED PHOTOS

Barry Cole grew up near the Victoria and Waterloo railway lines in post-World War II South London. During the day, he and his friends would play in the ruins of buildings destroyed by the Nazis.

“When I was a kid, my playground was bombed-out London,” explains Cole, who is a seasonal resident of Marco Island. “It was a bit of mess, but for a child it was like the surface of the moon — total devastation.”

In the evening, he would watch huge steam engines chug by his home to parts unknown. “I was fascinated by (trains),” says Cole, and as he would watch the trains cross bridges, he fell in love with bridges too.

Little did the young Cole know that this fascination would lead him to one-day build model train bridges, and further, that one of his model bridges would end up in a movie about an American World War II platoon with orders from President Franklin Delano Roosevelt to recover master works of art stolen by the Nazis and return them to their owners. That movie is “The Monuments Men,” and Cole’s model of the Ludendorff Bridge is part of the setting for movie scenes focused on the Battle of Remagen.

As an adult, Cole never forgot his love of trains and bridges. He became a civil engineer, and lived and worked in London with a short stop in Canada while working for an oil company. In retirement, he came to Marco Island in 2000 to visit a friend, and married his wife here. They stay in Marco for three months every year — a short respite from the dreary English winter plus relief from pain due to a life-changing automobile accident some years ago that ended his career. 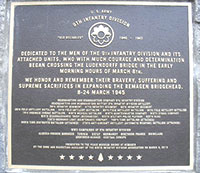 and the smoke plumed in the back of Cole’s mind, and a chance visit with a family friend, The Who’s Roger Daltrey, brought him full circle. Daltrey asked Cole to help him find a bridge he could use in his model train layout, which mirrored the Alpine region of southern Germany. When Cole could not find one, he decided to build it, and he used the Ludendorff Bridge as his inspiration.

“Roger was impressed by it,” remembers Cole modestly. “But it was a little too big, so I built it a bit smaller.” The project became a new hobby for Cole. “Thousands of people have (model trains) as a hobby,” Coles muses. “I have had people from all over the world contact me to build models.” In fact, he has constructed models of the Navajo Bridge, the Victoria Falls Bridge, the Sitter Viaduct and the Warren Truss Bridge. He even has a web site: www.barrysmodelbridges.com.

Cole kept the first model of the Ludendorff Bridge he made for Daltrey’s layouts, but after a time, he decided to put it on eBay in an effort to sell it. “I didn’t think anything about it,” notes Cole. “When I checked it a few days later, it had sold. I couldn’t believe it.”

The buyer was a global visual effects company named Moving Picture Co., or MPC. With eight offices around the world, the firm has worked on a number of box office smashes, including “World War Z,” “Life of Pi,” “Maleficent,” “The Amazing Spider Man 2,” “Man of Steel,” the “Harry Potter” franchise, and the “Pirates of Caribbean” franchise.

Cole delivered the model personally to MPC for fear the 8-foot-long box housing the structure would be destroyed during shipping. MPC officials 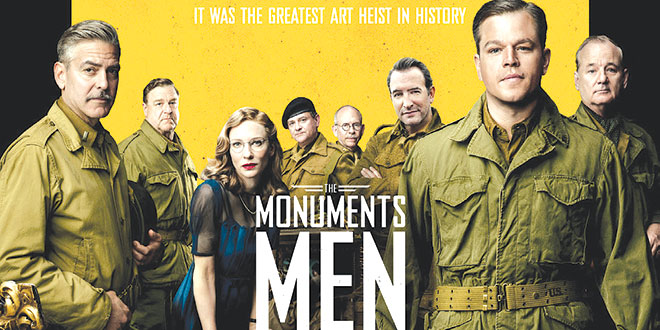 called Cole shortly thereafter to inform him that his bridge would be used in “The Monuments Men” during scenes centered on the Battle of Remagen.

According to war historians, the Battle of Remagen was fought between American and German forces in March 1945. The focal point of the battle was the Ludendorff Bridge which sat across the River Rhine — the last natural line of defense for the German Army. If American forces could capture the bridge, it would allow for the first major crossing of the Rhine by Western Allies, and most certainly signal the death knell for the Nazis.

As such, Adolf Hitler ordered the bridge be destroyed, but the attempts failed with great loss of life for both the Americans and Germans. The bridge was damaged but repairable, and repair the Western Allies did. The lead elements of the 27th Armored Infantry Battalion, Combat Command B, US 9th Armored Division, watched the bridge for enemy activity, and with none recorded, some 30,000 troops and 100 tanks were sent over the bridge. The Ludendorff Bridge was the first foothold in Germany during World War II for the Western Allies.

The bridge eventually collapsed and was never rebuilt. Its towers remain though, and can be visited. They also serve as a memorial to those who died while trying to protect it. Author Ken Hechler wrote about the battle in his novel “The Bridge at Remagen,” which was adapted into a film in 1969.

When Cole went to Marco Movies to see “The Monuments Men,” he could hardly believe his eyes as his bridge flashed on the big screen. He was proud of his work and his small role in the film: “This is a very important story that had to be told.”