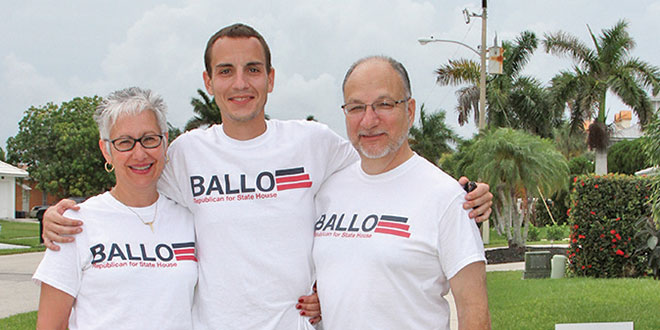 Photo by Val SimonTerri and Nick’s father Rich, are by his side on the campaign trail.

It seemed like a scene from “Back to the Future” with Michael J. Fox flying along on a hoverboard, but it was really Nick Ballo, a candidate for the Florida House of Representatives #106. He was going door-to-door campaigning using his hoverboard. Ballo is stepson to Terri (Barone) Ballo, a past Marco Island city councilwoman.

Nick at 27 years old points out Marco Rubio was his age when he started his political career. Nick said, “This district needs a true conservative. I grew up here, I know the citizens, the area and the issues.”