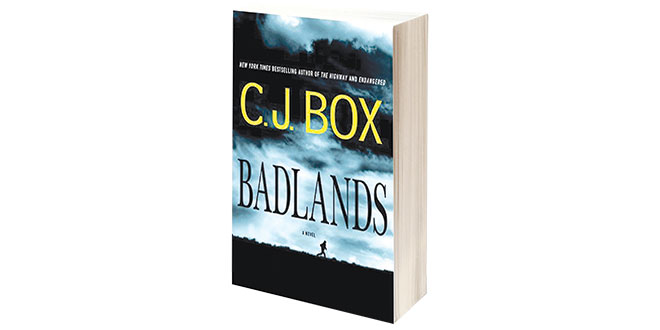 This is a terrific read. If you are already familiar with C.J. Box, you will not be surprised at that. The man is a w-r-i-t-e-r and an enthralling storyteller. Every word he puts on the page moves the plot along and deepens the character development so vividly that the reader can feel the very presence of these people. This book is made for one-sitting reads.

Badlands features his newer character, Cassie Dewell, for the second time. She is in North Carolina at the request of local and federal authorities to interview a trucker they believe to be the Lizard King, a serial killer who targets lot lizards, female prostitutes who work truck stops. Cassie is familiar with him from her position as investigator for the county sheriff in Helena, Montana. Cassie’s partner, Cody Hoyt, was shot and killed by one of the Lizard King’s cohorts. She subsequently took the killer down, but Ronald Pergram, the ringleader and suspected Lizard King, eluded them. He subsequently burned down his childhood home with his mother inside it, destroying any DNA trail.

Now the authorities in North Carolina are holding an independent trucker who was found to have a kill room in his trailer. Unable to find any trace evidence, they are detaining him while they go over every nanometer of the rig and wait for his reaction to Cassie’s meeting with him. The trucker they have in custody is Dale Spradley, whose background check reveals only two years of history. Although his hair color and body weight are different from Pergram, his height and age seem to match. His penchant for picking up 48-foot loads despite having a 53-foot trailer is what piqued the authorities’ interest, and led to the kill room discovery.

Coincidentally, Cassie is on the short list for a great opportunity with Bakken County in Grimstad, North Dakota as chief investigator for Sheriff Jon Kirkbride. She is expecting a phone call at any moment because this is the day Kirkbride will announce his choice. Maybe this is why the first session with Spradley does not go well. At any rate, she takes a break mainly to sneak a look at her cell to see if North Dakota has called. While chatting things over with the people who invited her, she abruptly excuses herself and goes back in the interview room. This time she is more assertive, well actually aggressive, with Spradley. If you poke a lizard hard enough, you will get a reaction. He flew over the table and starting choking her to the point where she lost consciousness. Hospitalized overnight, she woke up with a bruised neck and whispery voice, outfitted with an ugly brace to wear home to Montana. Her souvenir of North Carolina. Cassie was convinced he definitely was Pergram. His assault and battery on her had bought the local authorities more time to build a case against him.

In the airport for the uncomfortable flight back home, Cassie finds a voicemail from Sheriff Jon Kirkbride, offering her the position of his chief investigator: “ ’Greetings from the new energy capital of the world. We’d like to offer you that job we talked about and the sooner you can get here, the better. But there’s something you need to remember: this place is the Wild West. I can guar-and-damn-tee you ain’t ever seen anything like it. And I ain’t kidding about that.’ She lowered the phone and closed her eyes for a moment. Cassie couldn’t wait to tell Sheriff Tubman in Helena that she was moving on. She didn’t know who would be happier.”

Turns out it was a draw. When she offered Tubman her two-week notice, he snarled that two hours would be better. Sheriff Kirkbride confirmed that she was welcome as soon as she could get there, so she packed a bag, kissed 6-year-old Ben and her mother Isabel goodbye (they would follow when Ben’s school let out for Thanksgiving), hopped in her old Honda and made the trip to icy Grimstad, North Dakota. Almost immediately, Cassie learned the truth of Kirkbride’s voice mail. She was indeed in the very Wild West.

Due to the huge success of fracking, North Dakota had experienced a boom that brought thousands of people looking for employment, mostly men. This was either a miracle or a disaster, depending on your perspective, but in reality it was both. The influx of these vast amounts of men meant housing shortages, increased crime, demands for entertainment and food service that the small towns and cities in western North Dakota were not equipped to handle at first. Man camps, made up of portable housing units, were set up to provide residences for the working men. Lifelong residents of Grimstad and other boom towns suddenly got rich by either taking fracking jobs or selling their property to the corporations. Many took their money and ran out of town, uncomfortable with the changes.

Jon Kirkbride explained that this situation led to his having to look outside the state to hire new staff. Local and state people were going for the money. His once sleepy, law abiding little county was now full of people here for one thing – money. That money was attracting a variety of criminals including drug dealers, specifically a vicious gang, MS-13, based in California. This gang was establishing their monopoly in the area by brutally murdering members of the local bike gang who managed the drug trade. He also insinuated to Cassie that he suspected someone inside his department was not on the up-and-up. Kirkbride feared a gang war was heating up and Cassie’s mission was to look into things on her own, to trust no one but Kirkbride.

The other major character in this story is Kyle Westergaard, a 12-year-old newspaper boy, probably the most underestimated person in Grimstad, North Dakota. Kyle is small for his age, has fetal alcohol syndrome, a flat affect and a speech impediment. He is easily dismissed by just about everyone because he does not look like a threat to anybody. Kyle is used to fading into the woodwork and not being noticed. He speaks little but thinks a lot and has good people instincts. He also has a plan to escape Grimstad and take a trip on the river with his friend Raheem, similar to the trip Theodore Roosevelt took to find the bad guys who had stolen his boat. Kyle admires Roosevelt’s adventures in North Dakota very much.

Kyle is set on the path to encounter Cassie when he stumbles upon a package ejected from a vehicle careening off the road during the pre-dawn hours in the middle of his paper route. He pedals down to get a closer look and stops his bike out of view of the two vehicles and two sheriff’s department vehicles that show up. Kyle can’t hear their conversations, but their body language and the package at his feet tell him he needs to be very careful about whom he trusts. He bundles the package into his paper bag and goes back to work.

The action takes place over six days. Each day is crammed with events and new characters that keep the reader engrossed as the story sails along, bringing Cassie and Kyle closer to their encounter. Cassie is a gutsy cop and likeable person. Kyle is one resilient kid. When they combine forces, exciting things happen.

All that stuff at the beginning of the book about the Lizard King? Red herring as far as this story is concerned, but a phone call Cassie receives near the end of this book hints that the next installment of this series will have the Lizard King finding his way to Grimstad. I can hardly wait.

Rating: 4.5/5.0. Badlands is an entertaining read, chock full of sharply delineated characters and exciting plot developments. This is the kind of book that you want to share with your fellow readers as soon as you finish it. It is available just about everywhere in e-format and hardback. Collier County Public Library has hardback and audio formats.